Colorado v. Bertine, 479 U.S. 367 (1987), was a case in which the Supreme Court of the United States held that the Fourth Amendment does not prohibit the State from proving charges with the evidence discovered during an inventory search. [1]

The Supreme Court of the United States is the highest court in the federal judiciary of the United States. Established pursuant to Article III of the U.S. Constitution in 1789, it has original jurisdiction over a small range of cases, such as suits between two or more states, and those involving ambassadors. It also has ultimate appellate jurisdiction over all federal court and state court cases that involve a point of federal constitutional or statutory law. The Court has the power of judicial review, the ability to invalidate a statute for violating a provision of the Constitution or an executive act for being unlawful. However, it may act only within the context of a case in an area of law over which it has jurisdiction. The Court may decide cases having political overtones, but it has ruled that it does not have power to decide nonjusticiable political questions. Each year it agrees to hear about 100–150 of the more than 7,000 cases that it is asked to review.

This case is controlled by the principles governing inventory searches of automobiles and of an arrestee's personal effects, as set forth in South Dakota v. Opperman , [2] and Illinois v. Lafayette, [3] rather than those governing searches of closed trunks and suitcases conducted solely for the purpose of investigating criminal conduct. United States v. Chadwick , [4] and Arkansas v. Sanders , [5] distinguished. [1]

South Dakota v. Opperman, 428 U.S. 364 (1976), elaborated on the community caretaking doctrine. Under the Fourth Amendment, "unreasonable" searches and seizures are forbidden. In addition to their law enforcement duties, the police must engage in what the Court has termed a community caretaking role, including such duties as removing obstructions from roadways in order to ensure the free flow of traffic. When the police act in this role, they may inventory cars they have seized without "unreasonably" searching those cars.

United States v. Chadwick, 433 U.S. 1 (1977), was a decision by the United States Supreme Court, which held that, absent exigency, the warrantless search of double-locked luggage just placed in the trunk of a parked vehicle is a violation of the Fourth Amendment and not justified under the automobile exception. The Court reasoned that while luggage is movable like an automobile, it does not have the lesser expectation of privacy associated with an automobile.

Arkansas v. Sanders, 442 U.S. 753 (1979), was a decision by the United States Supreme Court, which held that absent exigency, the warrantless search of personal luggage merely because it was located in an automobile lawfully stopped by the police, is a violation of the Fourth Amendment and not justified under the automobile exception. Similar to United States v. Chadwick (1977), the luggage was the subject of police suspicion before being placed in the vehicle.

The following is a complete list of cases decided by the United States Supreme Court organized by volume of the United States Reports in which they appear. This is a list of volumes of U.S. Reports, and the links point to the contents of each individual volume.

Edwards may refer to:

Illinois v. Rodriguez, 497 U.S. 177 (1990), is a U.S. Supreme Court case dealing with the issue of whether a warrantless search conducted pursuant to third party consent violates the Fourth Amendment when the third party does not actually possess common authority over the premises.

Colorado v. Connelly, 479 U.S. 157 (1986), was a U.S. Supreme Court case that was initiated by Francis Connelly, who insisted that his schizophrenic episode rendered him incompetent, nullifying his waiver of his Miranda rights.

Quill Corp. v. North Dakota, 504 U.S. 298 (1992), was a United States Supreme Court ruling, since overturned, concerning use tax. The decision effectively prevented states from collecting any sales tax from retail purchases made over the Internet or other e-Commerce route unless the seller had a physical presence in the state. The ruling was based on the Dormant Commerce Clause, preventing states from interfering with interstate commerce unless authorized by the United States Congress. The case resulted from an attempt by North Dakota seeking to collect sales tax on licensed computer software offered by the Quill Corporation, an office supply retailer with no North Dakota presence, that allowed users to place orders directly with Quill.

California v. Acevedo, 500 U.S. 565 (1991), was a decision of the United States Supreme Court, which interpreted the Carroll doctrine to provide one rule to govern all automobile searches. The Court stated, "The police may search an automobile and the containers within it where they have probable cause to believe contraband or evidence is contained." The decision also overruled the distinctions in United States v. Chadwick (1977) and Arkansas v. Sanders (1979) which had previously held that, if probable cause existed to search an automobile, the police may perform a warrantless search of the automobile and the containers within it, but if the police only had probable cause to search a container in the automobile, the police first had to obtain a warrant before searching the container. 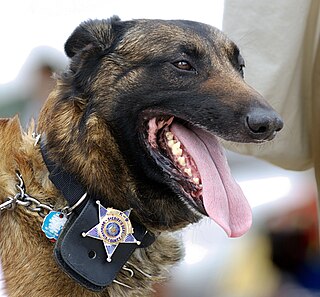 Florida v. Jardines, 569 U.S. 1 (2013), is a decision by the United States Supreme Court which held that police use of a trained detection dog to sniff for narcotics on the front porch of a private home is a "search" within the meaning of the Fourth Amendment to the United States Constitution, and therefore, without consent, requires both probable cause and a search warrant.

Florida v. Harris, 568 U.S. 237 (2013), was a case in which the United States Supreme Court addressed the reliability of a dog sniff by a detection dog trained to identify narcotics, under the specific context of whether law enforcement's assertions that the dog is trained or certified is sufficient to establish probable cause for a search of a vehicle under the Fourth Amendment to the United States Constitution. Harris was the first Supreme Court case to challenge the dog's reliability, backed by data that asserts that on average, up to 80% of a dog's alerts are wrong. Twenty-four U.S. States, the federal government, and two U.S. territories filed briefs in support of Florida as amici curiae.