These are the technologies used to create the various displays in use today.

Additionally, Cathode-ray tubes were widely used in the past and microLED displays are under development.

Electronic visual displays present visual information according to the electrical input signal (analog or digital) either by emitting light (then they are called active displays) or, alternatively, by modulating available light during the process of reflection or transmission (light modulators are called passive displays).

Electronic visual displays can be observed directly (direct view display) or the displayed information can be projected to a screen (transmissive or reflective screen). This usually happens with smaller displays at a certain magnification.

A different kind of projection display is the class of "laser projection displays", where the image is built up sequentially either via line by line scanning or by writing one complete column at a time. For that purpose one beam is formed from three lasers operating at the primary colors, and this beam is scanned electro-mechanically (galvanometer scanner, micro-mirror array)) or electro-acousto-optically.

Depending on the shape and on the arrangement of the picture elements of a display, either fixed information can be displayed (symbols, signs), simple numerals (7-segment layout) or arbitrary shapes can be formed (dot-matrix displays).

Emission and control of colors

Each sub-pixel of a display device must be selected (addressed) in order to be energized in a controlled way. 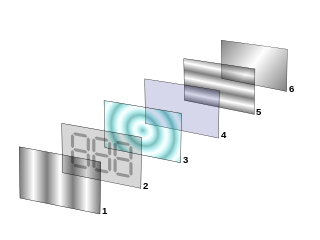 Opto-electronics is the study and application of electronic devices and systems that source, detect and control light, usually considered a sub-field of photonics. In this context, light often includes invisible forms of radiation such as gamma rays, X-rays, ultraviolet and infrared, in addition to visible light. Optoelectronic devices are electrical-to-optical or optical-to-electrical transducers, or instruments that use such devices in their operation. 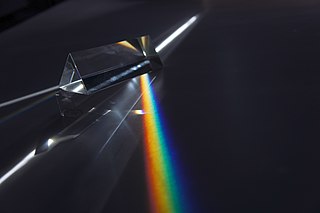 Photonics is the physical science and application of light (photon) generation, detection, and manipulation through emission, transmission, modulation, signal processing, switching, amplification, and sensing. Though covering all light's technical applications over the whole spectrum, most photonic applications are in the range of visible and near-infrared light. The term photonics developed as an outgrowth of the first practical semiconductor light emitters invented in the early 1960s and optical fibers developed in the 1970s.

A flat-panel display (FPD) is an electronic display device used to enable people to see content in a range of entertainment, consumer electronics, personal computer, and mobile devices, and many types of medical, transportation and industrial equipment. They are far lighter and thinner than traditional cathode ray tube (CRT) television sets and are usually less than 10 centimetres (3.9 in) thick. Flat-panel displays can be divided into two display device categories: volatile and static. Volatile displays require that pixels be periodically electronically refreshed to retain their state. A volatile display only shows an image when it has battery or AC mains power. Static flat-panel displays rely on materials whose color states are bistable, and as such, flat-panel displays retain the text or images on the screen even when the power is off. As of 2016, flat-panel displays have almost completely replaced old CRT displays. In many 2010-era applications, specifically small portable devices such as laptops, mobile phones, smartphones, digital cameras, camcorders, point-and-shoot cameras, and pocket video cameras, any display disadvantages of flat-panels are made up for by portability advantages.

Display may refer to: 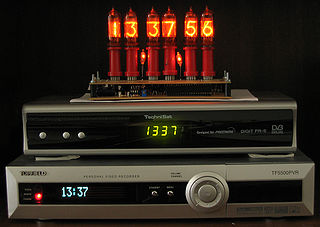 Liquid crystal on silicon is a miniaturized reflective active-matrix liquid-crystal display or "microdisplay" using a liquid crystal layer on top of a silicon backplane. It is also referred to as a spatial light modulator. LCoS was initially developed for projection televisions but is now used for wavelength selective switching, structured illumination, near-eye displays and optical pulse shaping. By way of comparison, some LCD projectors use transmissive LCD, allowing light to pass through the liquid crystal.

A video projector is an image projector that receives a video signal and projects the corresponding image on a projection screen using a lens system. Video projectors use a very bright Ultra-high-performance lamp, Xenon arc lamp, LED or solid state blue, RB, RGB or remote fiber optic RGB lasers to provide the illumination required to project the image, and most modern ones can correct any curves, blurriness, and other inconsistencies through manual settings. If a blue laser is used, a phosphor wheel is used to turn blue light into white light, which is also the case with white LEDs. A wheel is used in order to prolong the lifespan of the phosphor, as it is degraded by the heat generated by the laser diode. Remote fiber optic RGB laser racks can be placed far away from the projector, and several racks can be housed in a single, central room. Each projector can use up to two racks, and several monochrome lasers are mounted on each rack, the light of which is mixed and transmitted to the projector booth using optical fibers. Projectors using RB lasers use a blue laser with a phosphor wheel in conjunction with a conventional solid state red laser.

A spatial light modulator (SLM) is an object that imposes some form of spatially varying modulation on a beam of light. A simple example is an overhead projector transparency. Usually when the phrase SLM is used, it means that the transparency can be controlled by a computer. In the 1980s, large SLMs were placed on overhead projectors to project computer monitor contents to the screen. Since then more modern projectors have been developed where the SLM is built inside the projector. These are commonly used in meetings of all kinds for presentations.

A holographic display is a type of display that utilizes light diffraction to create a virtual three-dimensional image. Holographic displays are distinguished from other forms of 3D displays in that they do not require the aid of any special glasses or external equipment for a viewer to see the image. 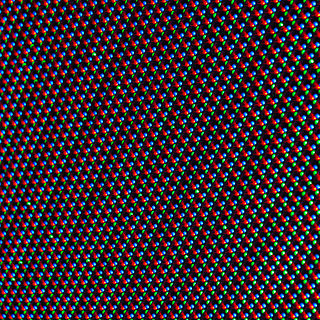 A LED display is a flat panel display that uses an array of light-emitting diodes as pixels for a video display. Their brightness allows them to be used outdoors where they are visible in the sun for store signs and billboards. In recent years, they have also become commonly used in destination signs on public transport vehicles, as well as variable-message signs on highways. LED displays are capable of providing general illumination in addition to visual display, as when used for stage lighting or other decorative purposes. LED displays can offer higher contrast ratios than a projector and are thus an alternative to traditional projection screens, and they can be used for large, uninterrupted video walls. microLED displays are LED displays with smaller LEDs, which poses significant development challenges.

Electrically operated display devices have developed from electromechanical systems for display of text, up to all-electronic devices capable of full-motion 3D color graphic displays. Electromagnetic devices, using a solenoid coil to control a visible flag or flap, were the earliest type, and were used for text displays such as stock market prices and arrival/departure display times. The cathode ray tube was the workhorse of text and video display technology for several decades until being displaced by plasma, liquid crystal (LCD), and solid-state devices such as thin-film transistors (TFTs), LEDs and OLEDs. With the advent of metal-oxide-semiconductor field-effect transistors (MOSFETs), integrated circuit (IC) chips, microprocessors, and microelectronic devices, many more individual picture elements ("pixels") could be incorporated into one display device, allowing graphic displays and video.

A see-through display or transparent display is an electronic display that allows the user to see what is shown on the screen while still being able to see through it. The main applications of this type of display are in head-up displays, augmented reality systems, digital signage, and general large-scale spatial light modulation. They should be distinguished from image-combination systems which achieve visually similar effects by optically combining multiple images in the field of view. Transparent displays embed the active matrix of the display in the field of view, which generally allows them to be more compact than combination-based systems.

Laser-powered phosphor display (LPD) is a large-format display technology similar to the cathode ray tube (CRT). Prysm, Inc., a video wall designer and manufacturer in Silicon Valley, California, invented and patented the LPD technology. The key components of the LPD technology are its TD2 tiles, its image processor and its backing frame that supports LPD tile arrays. The company unveiled the LPD in January 2010.