Gadair European Airlines was an airline based in Madrid, Spain. It was operating aircraft on ACMI leases for services to five continents. A number of changes of plan have been made, including a switch to Bahrain as the main hub. [1]

The airline originally planned to launch operations on 10 April 2006 using Boeing 767-200ER aircraft on ACMI leases, but delays in obtaining the necessary licences mean that the launch date was delayed to June 2007. The airline was owned by Grupo AISA and Santiago Sanchez Marin. [1]

In 2007 new shareholders entered in a capital increase, that resulted having two new shareholders, S. Kahla 25% and A. Baker 50%. The airline ceased operations around 2009. [2]

VLM Airlines was a Belgian airline offering scheduled, charter and ACMI services. It was headquartered at Antwerp International Airport in Deurne. It ceased operations on 31 August 2018. It is not to be confused with its Belgian sister airline VLM Airlines Brussels, which operated leisure charters and ceased operations in December 2018. A new airline known as Air Antwerp which is owned by CityJet (75%) and KLM (25%) launched operations on 9 September 2019 and consists of ex-employees and fleet of VLM Airlines.

Phuket Air was an airline based in Bangkok, Thailand. The airline specialised in leasing its fleet of Boeing 747 and 737 aircraft on an ACMI as well as wet lease basis to airlines worldwide needing extra passenger capacity. Other services provided included international charter services, ad hoc wet leasing services, religious pilgrimage charters (Hajj/Umrah) and dry lease services. Saudi Arabian Airlines was a major long term client of Phuket Air. In the past, the airline provided scheduled domestic and international air services. Its main base was at Suvarnabhumi Airport, Bangkok, with a hub at Phuket International Airport, Phuket. The airline was an international scheduled carrier before it shifted its focus to the ACMI/wet lease market.

Eagle Aviation France was a charter airline based in Saint-Nazaire, France. Its wet lease operations were based in Paris at Charles de Gaulle Airport.

Aurela was a charter airline based in Vilnius, Lithuania. It operated charter services for several tour operators in the Baltic states. Its main base was Vilnius International Airport.

Ukraine International Airlines PJSC, often shortened to UIA, is the flag carrier and the largest airline of Ukraine, with its head office in Kyiv and its main hub at Kyiv's Boryspil International Airport. It operates domestic and international passenger flights and cargo services to Europe, the Middle East, the United States, Canada, and Asia. 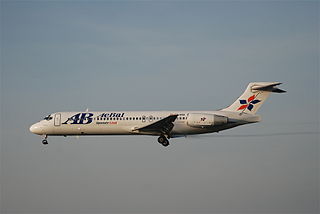 CargoLogicAir, Ltd. (CLA) is a British cargo airline with its headquarters at London Heathrow Airport. After the Global Supply Systems' contract with British Airways World Cargo was terminated in January 2014, CLA effectively became the only British all-cargo airline, absorbing some of the Global Supply Systems staff. It received its Air Operator's Certificate (AOC) from the UK Civil Aviation Authority in December 2015 and commenced operations soon after. The airline's fleet of two Boeing 747 aircraft operates scheduled and chartered freight services on routes between the UK, Asia, Africa and Americas.

Norwegian Air Argentina S.A.U. is an Argentinian low-cost airline. The airline formerly operates Boeing 737-800 aircraft, with bases in Buenos Aires and Córdoba. All aircraft were registered in Argentina.

Aura Airlines SL is a Spanish airline based at Adolfo Suárez Madrid–Barajas Airport. Owned by tour operator Gowaii, it operates charter flights in Europe and offers ACMI leases to other airlines.

Olympus Airways is a Greek charter airline offering ACMI-leasing, charter and ad-hoc flights headquartered in Athens. It flies A321 passenger aircraft and B757 freighter aircraft.