Last updated November 25, 2021
System for categorizing galaxies based on appearance

The Hubble sequence is a morphological classification scheme for galaxies invented by Edwin Hubble in 1926. [2] [3] It is often known colloquially as the “Hubble tuning-fork” because of the shape in which it is traditionally represented. Hubble's scheme divides galaxies into three broad classes based on their visual appearance (originally on photographic plates): [4]

These broad classes can be extended to enable finer distinctions of appearance and to encompass other types of galaxies, such as irregular galaxies, which have no obvious regular structure (either disk-like or ellipsoidal). [4]

The Hubble sequence is often represented in the form of a two-pronged fork, with the ellipticals on the left (with the degree of ellipticity increasing from left to right) and the barred and unbarred spirals forming the two parallel prongs of the fork. Lenticular galaxies are placed between the ellipticals and the spirals, at the point where the two prongs meet the “handle”. [8]

To this day, the Hubble sequence is the most commonly used system for classifying galaxies, both in professional astronomical research and in amateur astronomy. [9] Nonetheless, in June 2019, citizen scientists through Galaxy Zoo reported that the usual Hubble classification, particularly concerning spiral galaxies, may not be supported, and may need updating. [10] [11]

The de Vaucouleurs system for classifying galaxies is a widely used extension to the Hubble sequence, first described by Gérard de Vaucouleurs in 1959. [12] De Vaucouleurs argued that Hubble's two-dimensional classification of spiral galaxies—based on the tightness of the spiral arms and the presence or absence of a bar—did not adequately describe the full range of observed galaxy morphologies. In particular, he argued that rings and lenses are important structural components of spiral galaxies. [13]

The different elements of the classification scheme are combined — in the order in which they are listed — to give the complete classification of a galaxy. For example, a weakly barred spiral galaxy with loosely wound arms and a ring is denoted SAB(r)c.

Visually, the de Vaucouleurs system can be represented as a three-dimensional version of Hubble's tuning fork, with stage (spiralness) on the x-axis, family (barredness) on the y-axis, and variety (ringedness) on the z-axis. [16]

De Vaucouleurs also assigned numerical values to each class of galaxy in his scheme. Values of the numerical Hubble stage T run from −6 to +10, with negative numbers corresponding to early-type galaxies (ellipticals and lenticulars) and positive numbers to late types (spirals and irregulars). [17] Thus, as a rough rule, lower values of T correspond to a larger fraction of the stellar mass contained in a spheroid/bulge relative to the disk. The approximate mapping between the spheroid-to-total stellar mass ratio (MB/MT) and the Hubble stage is MB/MT=(10-T)2/256 based on local galaxies. [18]

The use of numerical stages allows for more quantitative studies of galaxy morphology.

The Yerkes scheme was created by American astronomer William Wilson Morgan. Together with Philip Keenan, Morgan also developed the MK system for the classification of stars through their spectra. The Yerkes scheme uses the spectra of stars in the galaxy; the shape, real and apparent; and the degree of the central concentration to classify galaxies. [20]

Thus, for example, the Andromeda Galaxy is classified as kS5. [21] 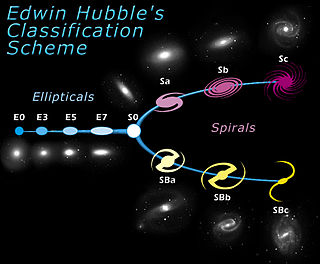 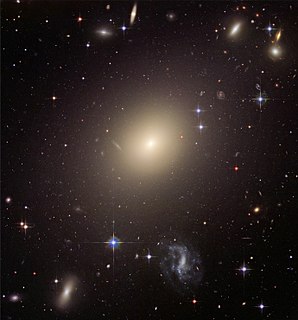 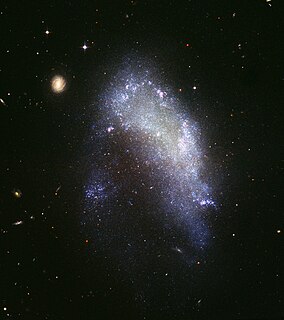 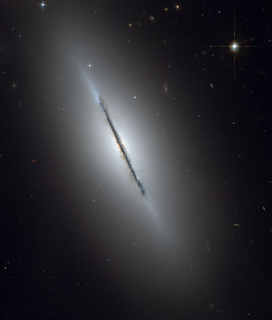 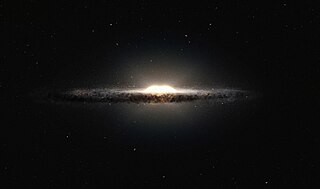 A disc galaxy is a galaxy characterized by a galactic disc, a flattened circular volume of stars. These galaxies may or may not include a central non-disc-like region. 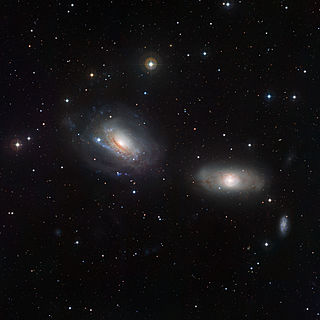 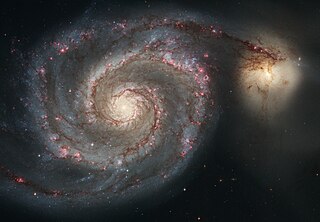 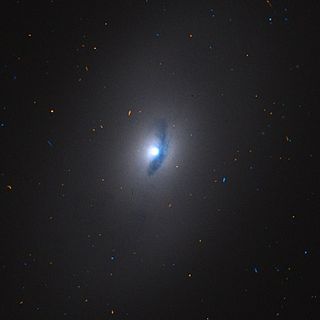 NGC 1553 is a prototypical lenticular galaxy in the constellation Dorado. It is the second brightest member of the Dorado Group of galaxies. British astronomer John Herschel discovered NGC 1553 on December 5, 1834 using an 18.7 inch reflector.

Magellanic spiral galaxies are (usually) dwarf galaxies which are classified as the type Sm. They are galaxies with one single spiral arm, and are named after their prototype, the Large Magellanic Cloud, an SBm galaxy. They can be considered to be intermediate between dwarf spiral galaxies and irregular galaxies. 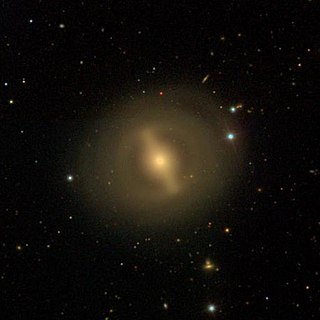 NGC 4608 is a barred lenticular galaxy located in the constellation of Virgo. The galaxy was discovered by astronomer William Herschel on March 15, 1784. At about 56 million light-years away, it is a member of the Virgo Cluster.

NGC 765 is an intermediate spiral galaxy located in the constellation Aries. It is located at a distance of circa 220 million light years from Earth, which, given its apparent dimensions, means that NGC 765 is about 195,000 light years across. It was discovered by Albert Marth on October 8, 1864. The galaxy has an extensive hydrogen (HI) disk with low surface brightness, whose diameter is estimated to be 240 kpc. 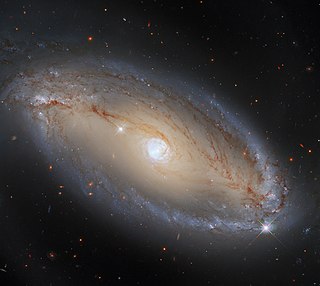 NGC 5728 is an active barred spiral galaxy located 146 million light years away in the southern constellation of Libra. It was discovered on May 7, 1787 by William Herschel. The designation comes from the New General Catalogue of J. L. E. Dreyer, published in 1888. It has an apparent visual magnitude of 13.40 and spans an angle of 3.4 arcminutes. The galaxy shows a red shift of 0.00935 and has a heliocentric radial velocity of 2,803 km/s. It has an estimated mass of 72 billion times the mass of the Sun and stretches around 30 kpc across.