This article contains lists of quasars. More than a million quasars have been observed, [1] so any list on Wikipedia is necessarily a selection of them.

Proper naming of quasars are by Catalogue Entry, Qxxxx±yy using B1950 coordinates, or QSO Jxxxx±yyyy using J2000 coordinates. They may also use the prefix QSR. There are currently no quasars that are visible to the naked eye.

This is a list of quasars, with a common name, instead of a designation from a survey, catalogue or list.

This is a list of quasars that as a result of gravitational lensing appear as multiple images on Earth.

This is a list of double quasars, triple quasars, and the like, where quasars are close together in line-of-sight, but not physically related.

Large quasar groups (LQGs) are bound to a filament of mass, and not directly bound to each other.

This is a list of quasars with jets that appear to be superluminal due to relativistic effects and line-of-sight orientation. Such quasars are sometimes referred to as superluminal quasars.

Quasars that have a recessional velocity greater than the speed of light (c) are very common. Any quasar with z > 1 is receding faster than c, while z exactly equal to 1 indicates recession at the speed of light. [33] Early attempts to explain superluminal quasars resulted in convoluted explanations with a limit of z = 2.326, or in the extreme z < 2.4. [34] The majority of quasars lie between z = 2 and z = 5.

In cosmic scales distance is usually indicated by redshift (denoted by z) which is a measure of recessional velocity and inferred distance due to cosmological expansion. 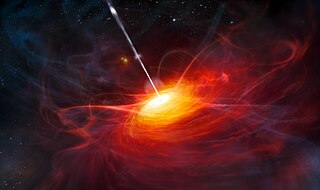 A quasar is an extremely luminous active galactic nucleus (AGN), powered by a supermassive black hole, with mass ranging from millions to tens of billions times the mass of the Sun, surrounded by a gaseous accretion disc. Gas in the disc falling towards the black hole heats up because of friction and releases energy in the form of electromagnetic radiation. The radiant energy of quasars is enormous; the most powerful quasars have luminosities thousands of times greater than a galaxy such as the Milky Way. Usually, quasars are categorized as a subclass of the more general category of AGN. The redshifts of quasars are of cosmological origin.

In the fields of Big Bang theory and cosmology, reionization is the process that caused matter in the universe to reionize after the lapse of the "dark ages".

The Twin Quasar, was discovered in 1979 and was the first identified gravitationally lensed object. It is a quasar that appears as two images, a result from gravitational lensing caused by the galaxy YGKOW G1 that is located directly between Earth and the quasar.

APM 08279+5255 is a very distant, broad absorption line quasar located in the constellation Lynx. It is magnified and split into multiple images by the gravitational lensing effect of a foreground galaxy through which its light passes. It appears to be a giant elliptical galaxy with a supermassive black hole and associated accretion disk. It possesses large regions of hot dust and molecular gas, as well as regions with starburst activity.

NGC 7319 is a highly distorted barred spiral galaxy that is a member of the compact Stephan's Quintet group located in the constellation Pegasus, some 311 megalight-years distant from the Milky Way. The galaxy's arms, dust and gas have been highly disturbed as a result of the interaction with the other members of the Quintet. Nearly all of the neutral hydrogen has been stripped from this galaxy, most likely as a result of a collision with NGC 7320c some 100 million years ago. A pair of long, parallel tidal tails extend southward from NGC 7319 in the direction of NGC 7320c, and is undergoing star formation.

CLASS B1359+154 is a quasar, or quasi-stellar object, that has a redshift of 3.235. A group of three foreground galaxies at a redshift of about 1 are behaving as gravitational lenses. The result is a rare example of a sixfold multiply imaged quasar.

The Cloverleaf quasar is a bright, gravitationally lensed quasar.

György Paál was a Hungarian astronomer and cosmologist.

The Lynx Supercluster was discovered in 1999 as ClG J0848+4453, a name now used to describe the western cluster, with ClG J0849+4452 being the eastern one. It contains at least two clusters, designated RXJ 0848.9+4452 and RXJ 0848.6+4453. At the time of discovery, it was the most distant known supercluster with a comoving distance of 12.9 billion light years. Additionally, seven smaller groups of galaxies are associated with the supercluster. Through electromagnetic radiation and how it reacts with matter, we have been able to find three groupings of stars and two x-ray clusters within the Lynx.