Henry was the second son of Margrave Leopold III of Austria, the first from his second marriage with Agnes of Waiblingen, [2] a sister of the last Salian emperor, Henry V. Leopold himself was expected to stand as a candidate in the 1125 election as king of Germany; nevertheless, he renounced in favour of his half-brother, the Hohenstaufen duke Frederick II of Swabia, who eventually lost against Lothair of Supplinburg. Among Henry's younger brothers were Bishop Otto of Freising and Archbishop Conrad II of Salzburg. His sister Judith became the wife of Marquess William V of Montferrat.

Henry's nickname, Jasomirgott, was first documented during the 13th century in the form of Jochsamergott, the meaning of which is unclear. According to one theory, it was derived from a spoofed Arab word bearing a connection to the Second Crusade in which Henry participated in 1147. According to popular etymology, it is derived from the Middle High German form of the oath joch sam mir got helfe (meaning: "Yes, so help me God").

When Margrave Leopold III died in 1136, he was succeeded by his third-born son Leopold IV, probably because Henry already administered the Rhenish possessions of his mother's now-extinct Salian dynasty. In April 1140, the Hohenstaufen king Conrad III of Germany enfeoffed him with the County Palatine of the Rhine, which he ruled for only a short time as he was appointed Bavarian duke and margrave of Austria when his younger brother Leopold IV unexpectedly died in October 1141. Leopold had received the Duchy of Bavaria in 1139, after King Conrad had deposed Duke Henry the Proud in the course of the dispute between the Welf and Hohenstaufen dynasties.

Henry took his residence in the Bavarian capital of Regensburg (Ratisbona). In May 1142 he married Gertrude, daughter of Emperor Lothair and widow of Henry the Proud. She died after less than one year, giving birth to her only child with Henry.

The duke remained a loyal follower of the Hohenstaufens and in May 1147 accompanied King Conrad on the Second Crusade. When they suffered a disastrous defeat at the Battle of Dorylaeum against the Seljuk Turks in October, Henry narrowly escaped together with Conrad's nephew, young Frederick Barbarossa. Later on, he attended the Council of Acre along with king Conrad III and Frederick Barbarossa, then the Siege of Damascus. On their way home, Henry stayed at the court of the Byzantine emperor Manuel I Komnenos, where he married his niece Theodora in late 1148.

Elected king of Germany in 1152, Frederick Barbarossa tried to reach a compromise with the Welfs and endowed Henry the Lion, son of the late Henry the Proud, with the Duchy of Bavaria in 1156. A replacement duchy had to be found for the Babenberg family, which was accomplished by the Privilegium Minus , through which Frederick elevated Henry's Margraviate of Austria to a duchy with complete independence from Bavaria.

Unlike his father, who had resided in Klosterneuburg most of the time, Henry moved his Austrian residence to Vienna in 1145. Only by this act could Vienna surpass other cities within the duchy, such as Krems, Melk, and Klosterneuburg. Since then, it has remained the capital of the country. In addition, in 1147 the first St. Stephen's Church was completed, becoming a visible landmark for the city and showing its prominence. In 1155, Henry founded the Schottenstift monastery in Vienna, in the courtyard of which a statue of him stands to this day.

In November 1176, while his Austrian lands were campaigned by the forces of Duke Soběslav II of Bohemia, Henry II with his horse fell from a rotten bridge near Melk and suffered a femoral neck fracture. Henry II succumbed to his injuries on 13 January 1177 in Vienna. According to his last will, he was buried in the Schottenstift monastery.

Until 1143, Henry II was married to Gertrude of Süpplingenburg, [3] the daughter of Emperor Lothair II. In 1148 he married Theodora Komnene, [3] niece of the Byzantine emperor Manuel I. Both marriages were an expression of the importance of the Babenberg dynasty in Central Europe in that period.

Henry had one child by Gertrude of Süpplingenburg: 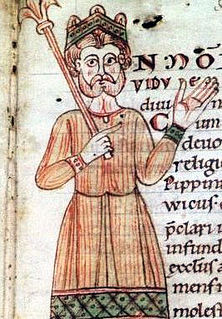 Conrad III of the Hohenstaufen dynasty was from 1116 to 1120 Duke of Franconia, from 1127 to 1135 anti-king of his predecessor Lothair III and from 1138 until his death in 1152 king in the Holy Roman Empire. He was the son of Duke Frederick I of Swabia and Agnes, a daughter of the Salian Emperor Henry IV. 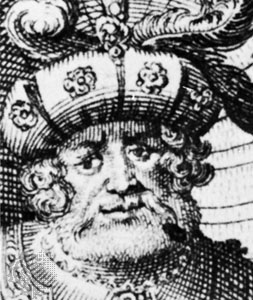 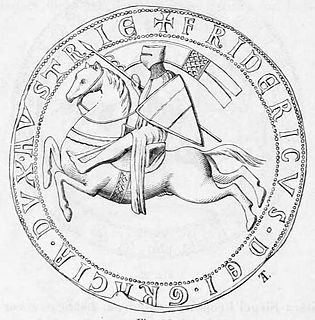 Frederick II, known as Frederick the Quarrelsome, was Duke of Austria and Styria from 1230 until his death. He was the fifth and last Austrian duke from the House of Babenberg, since the former margraviate was elevated to a duchy by the 1156 Privilegium Minus. He was killed in the Battle of the Leitha River, leaving no male heirs. 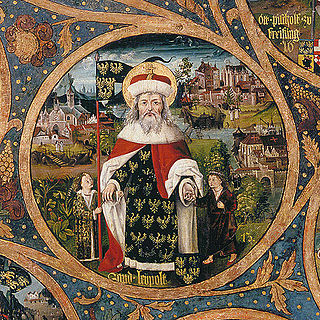 Leopold III, known as Leopold the Good, was the Margrave of Austria from 1095 to his death in 1136. He was a member of the House of Babenberg. He was canonized on 6 January 1485 and became the patron saint of Austria, Lower Austria, Upper Austria, and Vienna. His feast day is 15 November.

The Privilegium Minus is the denotation of a deed issued by Emperor Frederick Barbarossa on 17 September 1156. It included the elevation of the Bavarian frontier march of Austria to a duchy, which was given as an inheritable fief to the House of Babenberg.

Vladislaus II or Vladislav II was the Duke of Bohemia from 1140 and then King of Bohemia from 1158 until his abdication in 1173. He was the second Bohemian king after Vratislaus II, but in neither case was the royal title hereditary.

Richenza of Northeim was Duchess of Saxony from 1106, Queen of Germany from 1125 and Holy Roman Empress from 1133 as the wife of Lothair of Supplinburg. 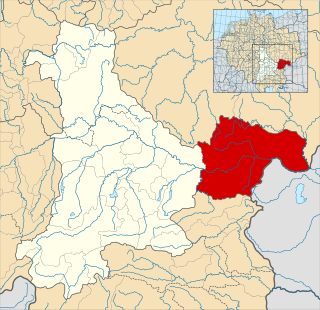 The Margraviate of Austria was a medieval frontier march, centered along the river Danube, between the river Enns and the Vienna Woods (Wienerwald), within the territory of modern Austrian provinces of Upper Austria and Lower Austria. It existed from c. 972 to 1156.