Following a self-released demo tape in 1998, [4] the quartet's official debut was Fukd ID #3 in 2000, an EP distributed through Scottish independent record label Chemikal Underground. The label later announced that the EP had sold out. [5] The band then self-published their Precipitate EP in 2001, [6] and the strength of the previous two EPs led to the band signing with Matador Records on April 26, 2002. [7]

Interpol's first release for the label was the self-titled Interpol EP in June 2002. The EP was considered a success by music critics, and aided in shedding the band's frequent comparisons to British post-punk group Joy Division. [8] [9] Two of the three tracks on the EP featured on the band's debut studio album, Turn on the Bright Lights , released in 2002. The record peaked at number 101 on the UK Albums Chart, [10] and number 158 on the Billboard 200. [11] The album was certified Gold in the United Kingdom, [12] with the record's highest-charting single "Obstacle 1" reaching number 41 on the UK Singles Chart. [13] After two years, the band released Antics in 2004. The album debuted at number fifteen in the US, [11] and in the top ten on the Irish Albums Chart. [14] The album's second single "Evil" peaked at number eighteen in the UK Singles Chart, the band's highest-charting single in the country. [15] Antics was certified Gold in the United Kingdom, Australia and the United States. [12] [16] [17]

In 2006, Interpol left Matador to sign with major label Capitol Records. [18] Their third full-length, Our Love to Admire , was released worldwide in 2007, and brought the band chart-topping success in Ireland. [14] Lead single "The Heinrich Maneuver" became the band's highest and longest charting single in their home nation, spending nineteen weeks in the Billboard Alternative Songs chart, peaking at number eleven. [11] The band's self-titled fourth album Interpol was released in 2010, with the record peaking at number one on the Billboard Independent Albums chart. [11] Interpol was the last album featuring Dengler, who left the band in May 2010. [19]

Listed are songs that were not released by Interpol as stand-alone singles or on studio albums, or released prior to any Interpol release. 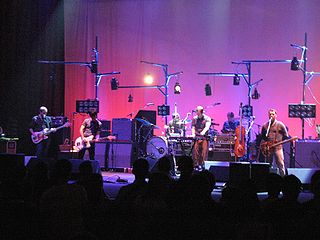 The discography of Modest Mouse, an American indie rock band, consists of seven studio albums, six extended plays, two compilation albums, four low fidelity cassette releases, one live album, twenty-five singles, and nine reissues. Three of their releases have been certified at least Gold by the Recording Industry Association of America (RIAA) for shipments in excess of 500,000 copies. One release has further been certified Platinum, for shipments in excess of 1,000,000 copies. 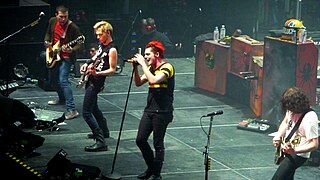 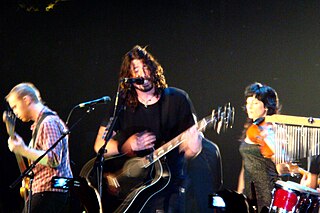 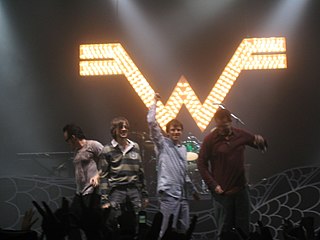 The discography of Weezer, an American rock band, consists of 15 studio albums, two compilation albums, one video album, eight extended plays, 37 singles and 40 music videos. Weezer's self-titled debut studio album, often referred to as The Blue Album, was released in May 1994 through DGC Records. The album was a commercial success, peaking at number 16 on the US Billboard 200 and spawning the singles "Undone – The Sweater Song" and "Buddy Holly", both of which were responsible for launching Weezer into mainstream success with the aid of music videos directed by Spike Jonze. It has sold 3.3 million copies in the United States and has been certified triple platinum by the Recording Industry Association of America (RIAA), becoming the band's best selling album to date. Following the success of their debut album, Weezer took a break from touring for the Christmas holidays. Lead singer Rivers Cuomo began piecing together demo material for Weezer's second studio album. Cuomo's original concept for the album was a space-themed rock opera, Songs from the Black Hole. Ultimately, the Songs from the Black Hole album concept was dropped; the band, however, continued to utilize songs from these sessions into work for their second studio album. Pinkerton was released as the band's second studio album in September 1996. Peaking at number 19 on the Billboard 200, it was considered a critical and commercial failure at the time of its release, selling far less than its triple platinum predecessor. However, in the years following its release, it has seen much critical and commercial championing. 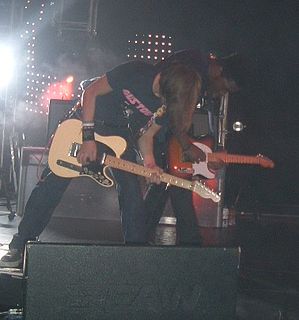 The discography of Bloc Party, a British indie rock band, consists of six studio albums, three extended plays (EPs), and two remix albums released on primary label Wichita Recordings. Bloc Party were formed in 1999 by chief songwriter and frontman Kele Okereke and Russell Lissack. Bassist Gordon Moakes and drummer Matt Tong joined the band later. The first song by them that we know of is called “This Is Not A Competition” although it hasn't been officially released, it was the first song the band put on their official website. The quartet's first release was the Bloc Party EP in 2004; the first single, "She's Hearing Voices", was released and it failed to chart in the United Kingdom. The next EP, Little Thoughts was released the same year only in Japan; it included Bloc Party's first UK Top 40 entry, the double A-side "Little Thoughts/Tulips", which peaked at number 38. 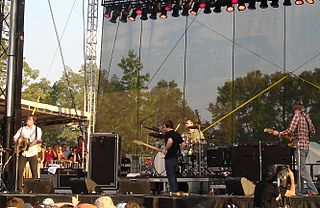 Death Cab for Cutie has released nine studio albums, five extended plays (EPs), a demo tape, a digital album, one live album, thirty-two singles, nine music videos, and two DVDs. Death Cab for Cutie is an American indie rock group from Bellingham, Washington and was formed in 1997 by Ben Gibbard as a side project from Pinwheel. After releasing a demo tape, he added guitarist Chris Walla, bassist Nick Harmer, and drummer Nathan Good to the band. Death Cab signed to Barsuk Records and released four extended plays (EPs) and four studio albums through the label. The fourth album, Transatlanticism, reached number 97 on the Billboard 200 and was eventually certified gold in the United States. The group also issued nine singles and a demo tape through Barsuk. 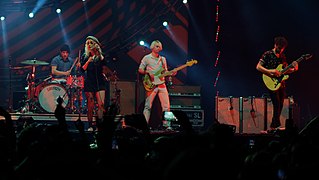 The American rock band Paramore has released five studio albums, five extended plays, two live albums, twenty three singles, one video album, and twenty six music videos. The band was formed in Franklin, Tennessee, in 2004 by lead vocalist Hayley Williams with guitarists Josh Farro and Taylor York, bassist Jeremy Davis, and drummer Zac Farro. In 2005, Paramore signed with the New York City-based Fueled by Ramen and released their debut album entitled All We Know Is Falling. Three singles were released from the album, but none of them charted. The album did not chart in the Billboard 200 either, although it peaked at number thirty in the Billboard Top Heatseekers. All We Know Is Falling received gold certification in the United Kingdom and in July 2014 the RIAA certified the album gold in the United States. 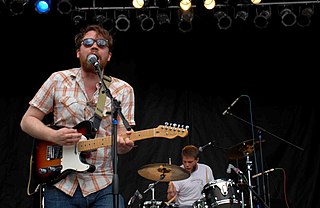 The discography of Frightened Rabbit consists of five studio albums, two EPs, two live albums, and ten singles. The band released its debut album, Sing the Greys, in 2006 on independent label Hits the Fan, before signing to Fat Cat Records in 2007. In 2008, the band released its second studio album, The Midnight Organ Fight, to critical acclaim and subsequently developed a large cult following. The band's third studio album, The Winter of Mixed Drinks, was released in 2010, with the band signing to Atlantic Records later that year. A new EP, State Hospital, was released in September 2012. 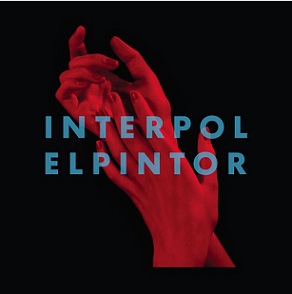 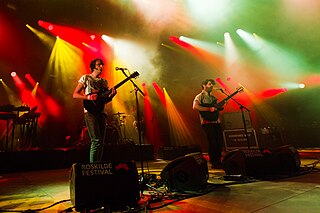 The discography of American rock band Spoon consists of 10 studio albums, four extended plays (EPs), and 26 singles. Formed in 1993 in Austin, Texas by Britt Daniel and Jim Eno (drums), Spoon released their debut studio album, Telephono, in 1996 on Matador Records. Their follow-up full-length, A Series of Sneaks, was released in 1998 on Elektra, who subsequently dropped the band. Spoon went on to sign with Merge Records, where Spoon gained greater commercial success and critical acclaim with the albums Girls Can Tell (2001), Kill the Moonlight (2002), and particularly Gimme Fiction (2005), which debuted at number 44 on the Billboard 200 and sold over 300,000 copies in the US. The group's next three albums - Ga Ga Ga Ga Ga (2007), Transference (2010), and They Want My Soul (2014) - reached the top 10 of the US charts, while the latter two peaked in the top 20 in Canada and the top 50 in Australia. The band's ninth album, Hot Thoughts, was released on March 17, 2017. 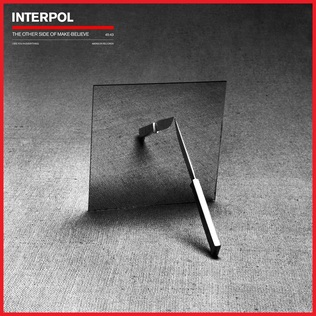 The Other Side of Make-Believe is the seventh studio album by American rock band Interpol, released on July 15, 2022, through Matador Records. Produced by Mark "Flood" Ellis and mixed by Alan Moulder, the album was recorded between September 2021 and January 2022 at Battery Studios in London. The songs "Toni", "Something Changed", "Fables", and "Gran Hotel" were released as singles in promotion of the album. The album title comes from the opening lyrics of the track "Passenger".