The following is List of Universities and Colleges in Tianjin.

Note: Institutions without full-time bachelor programs are not listed. And all lists are by English alphabet. 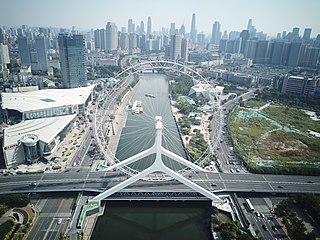 Tianjin, alternately romanized as Tientsin, is a municipality and a coastal metropolis in Northern China on the shore of the Bohai Sea. It is one of the nine national central cities in Mainland China, with a total population of 13,866,009 inhabitants at the 2020 Chinese census and Its built-up area, made up of 12 central districts, was home to 11,165,706 inhabitants and is also the world's 29th-largest agglomeration and 11th-most populous city proper.

Nankai University is a public research university located in Tianjin, China. It is a prestigious Chinese state Class A Double First Class University approved by the central government of China, and a member of the former project 985 and project 211 group of universities. It was founded in 1919, by educators Yan Xiu and Zhang Boling.

The Integrated Programme (IP) is a scheme that allows high-performing students in secondary schools in Singapore to skip the GCE Ordinary Level (O-level) examination and proceed to sit for the GCE Advanced Level (A-level) examination, International Baccalaureate (IB), or an equivalent examination, after six years of secondary education. The A-level examination is typically taken by students at the end of their second or third year in junior college.

Xiamen University, colloquially known as Xia Da, is a public research university in Xiamen, Fujian, China. Established in 1921 by Tan Kah Kee, a member of the overseas Chinese diaspora, the university has been perennially regarded as one of the top academic institutions in Southern China, with strengths in mathematics, chemistry, oceanography, economics, management, law, communication and political science.

Raffles Institution (RI) is an independent educational institution in Bishan, Singapore. Founded in 1823 and named after Stamford Raffles, it is the oldest school in the country. It provides secondary education for boys only from Years 1 to 4, and pre-university education for both boys and girls in Years 5 and 6. Since 2007, RI and its affiliated school Raffles Girls' School have offered a six-year Raffles Programme, which allows students to skip the Singapore-Cambridge GCE Ordinary Level examinations and proceed to take the Singapore-Cambridge GCE Advanced Level examinations at the end of Year 6.

National Key Universities previously referred to universities recognized as prestigious and which received a high level of support from the central government of the People's Republic of China. The term is no longer in official use by 1990s. However, it remains part of the vernacular, as evidenced by numerous Chinese media articles which still refer to "National Key Universities".

Junior colleges are pre-university institutions in Singapore that offer two-year pre-university courses that leads to either the Singapore-Cambridge GCE Advanced Level or the International Baccalaureate Diploma.

Raffles Design Institute is a for-profit, design-centric educational institution headquartered in Singapore. Its flagship campus was established in 1990 by the company Raffles Education Corporation Limited.

New Era University College also referred to by its acronym NEUC is a private, non-profit higher education institution in Kajang, Selangor, Malaysia. It was founded on May 28, 1997