The CAAC does not share the responsibility of managing China's airspace with the Central Military Commission under the regulations in the Civil Aviation Law of the People's Republic of China.

On November 2, 1949, shortly after the founding of the People's Republic of China, the CCP Central Committee decided to found the Civil Aviation Agency under the name of the People's Revolutionary Military Commission, and under the command of the People's Liberation Army Air Force, to manage all non-military aviation in the country, as well as provide general and commercial flight services. The Civil Aviation Agency was created in December of the same year, and set offices in Chongqing, Guangzhou, Shanghai, Tianjin and Wuhan. [5] On March 10, 1950, the Guangzhou Office began to work, managing civil flight services in Guangdong, Guangxi, Hunan, later it was merged with Wuhan Office to form the Civil Aviation Office of Central and Southern China on January 21, 1951 in Guangzhou, and renamed Central and Southern Civil Aviation Office, working for civil flight administrations in Guangdong, Guangxi, Hubei and Hunan.

On 9 June 1953, following the Aeroflot in the Soviet Union, the People's Aviation Company of China was merged with the Civil Aviation Agency of the Central Revolutionary Military Commission. Later, the SKOGA was merged with the Beijing administration office on January 1, 1955. [7] : 275

On February 27, 1958, the Civil Aviation Agency was transferred to the Ministry of Transport, later the Agency ratified the Report for the Opinions of System Devolving (Chinese :关于体制下放意见的报告) from the party branch of the Ministry of Transport in June 17, both national and local authorities have responsibilities of civil aviation, international and main domestic flights were mainly under leadership of the national authority, local and agricultural flights were mainly under the leadership of local authority, thus most of provinces and autonomous regions established their own civil aviation administration offices. Five administration offices in Beijing, Chengdu, Guangzhou, Shanghai, Tianjin and Ürümqi were changed to be reginal administration agency in December 13. The Agency was renamed the General Administration of Civil Aviation of the Ministry of Transport on November 17, 1960.

In 1963, China purchased six Vickers Viscount aircraft from Great Britain, followed in 1971 with the purchase of four Hawker Siddeley Trident aircraft from Pakistan International Airlines. In August 1971 the airline purchased six Trident 2Es directly from Hawker Siddeley. [8] The country also placed provisional orders for three Concorde aircraft. With the 1972 Nixon visit to China the country ordered 10 Boeing 707 jets. In December 1973 it took the unprecedented step of borrowing £40 million from Western banks to fund the purchase of 15 additional Trident jets. Soviet built Ilyushin Il-62 aircraft were used on long range routes during the 1970s and 1980s.

On March 5, 1980, the General Administration of Civil Aviation was no longer mandated by PLA Air Force, and transferred to the State Council, [9] some administrative works were still under the People's Liberation Army, the air controlling was managed by PLA General Stuff Department and Air Force Command.

On January 30, 1987, the State Council ratified the Report for the Reform Solution and Executive Steps of the Civil Aviation System Administration System (Chinese :关于民航系统管理体制改革方案和实施步骤的报告). [10] Since then, CAAC acts solely as a government agency, reorganized six reginal administration agencies, and no longer provides commercial flight services. In 1988 CAAC Airlines was divided up into a number of individual air carriers, many of them named after the region of China where it had its hub.

On April 19, 1993, the General Administration of Civil Aviation became the ministry-level agency of the State Council.

In March 2008, CAAC was made a subsidiary of the newly created Ministry of Transport, and its official Chinese name was slightly adjusted to reflect its being no longer a ministry-level agency. Its official English name has remained Civil Aviation Administration of China.

On 11 March 2019, the CAAC was the first civil aviation authority to ground the Boeing 737 MAX. [11] After so doing, most of the world's aviation authorities grounded the MAX, including the European Union Aviation Safety Agency the next day. [12] It took the US Federal Aviation Administration until 13 March to ground the MAX. [13] Aviation commentators saw this as having bolstered the global reputation of the CAAC at the expense of the FAA. [14] [15] [16] After the MAX was cleared to return by the FAA in November 2020, [17] the CAAC reiterated that there "is no set timetable" to lifting the MAX grounding in China. [18] In the early August 2021, a MAX made a test flight in Shanghai for validation. [19] Later CAAC issued an airworthiness directive on December 2 to allow the type return to service if the MCAS is corrected following Boeing's instructions. [20]

Currently, CAAC is an administrative department mostly intended to supervise aviation market. CAAC releases route applications every week and for routes that don't fly to an open-sky country/region, there will be monthly scoring releases that determine the score for each of them. CAAC subsequently grant those whose score highest on the list permission to start.

List of Directors of the Civil Aviation Administration of China: [21]

China Southern Airlines Company Limited is an airline headquartered in Baiyun District, Guangzhou, Guangdong Province. Established on 1 July 1988 following the restructuring of the CAAC Airlines that acquired and merged a number of domestic airlines, the airline became one of China's "Big Three" airlines, the world's sixth-largest airline measured by passengers carried and Asia's largest airline in fleet size, revenue, and passengers carried. With its main hubs at Guangzhou Baiyun International Airport and Beijing Daxing International Airport, the airline operates more than 2,000 flights to more than 200 destinations daily and was a member of SkyTeam until 1 January 2019. The airline started a frequent flyer program partnership with American Airlines in March 2019. The logo of the airline consists of a kapok flower on a blue tail fin. The company slogan is Fly into your dreams.

Hainan Airlines Co., Ltd. is an airline headquartered in Haikou, Hainan, People's Republic of China. It is the largest civilian-run and majority state-owned air transport company, making it the fourth-largest airline in terms of fleet size in the People's Republic of China, and tenth-largest airline in Asia in terms of passengers carried. It operates scheduled domestic and international services on 500 routes from Hainan and nine locations on the mainland, as well as charter services. Its main base is Haikou Meilan International Airport, with hubs at Beijing Capital International Airport and Xi'an Xianyang International Airport and several focus cities.

China Xinhua Airlines was an airline based in Chaoyang District, Beijing, China. It operated scheduled trunk services and charter flights. Its main bases were Beijing Capital International Airport and Tianjin Binhai International Airport. On November 29, 2007, it merged with Shanxi Airlines and Chang An Airlines to form Grand China Air, a subsidiary of Hainan Airlines.

China Xinjiang Airlines was a Chinese airline owned by CAAC. It had its headquarters on the property of Diwopu International Airport in Urumqi. It was based in Ürümqi and had a secondary hub in Changzhou in Jiangsu province.

China United Airlines Co., Ltd. is a low-cost carrier and a subsidiary of China Eastern Airlines with its headquarters in Fengtai District, Beijing, operating scheduled flights and charter services in co-operation with local enterprises out of Beijing Daxing International Airport. The airline previously had its headquarters in another area in Fengtai District, Beijing. 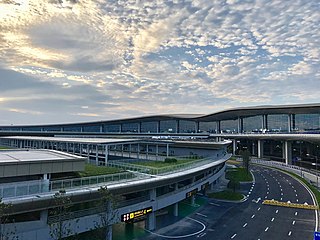 Datong Yungang Airport is an airport serving the city of Datong in Shanxi Province, China. It is located north of the town of Beijiazao in Datong County, 15.2 kilometers from the city center.

Juneyao Air, formerly known as Juneyao Airlines, is a carrier based in Shanghai, operating both domestic and international services from two airports. The company was founded in 2005 as a subsidiary of Shanghai JuneYao (Group) Co., Ltd, and started operations in September 2006. It reported a net profit of about CNY1.05 billion in 2015. 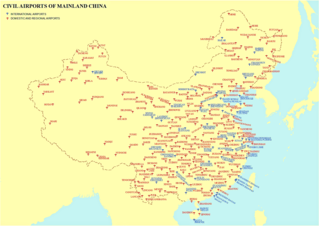 As of December 2017, there are 229 commercial airports in China.

Civil Aviation Flight University of China is the largest civil aviation university in Asia and the world's largest flight training institution. It is under the direct leadership of Civil Aviation Administration of China (CAAC). With its motto of Lofty Aspiration, Far-reaching Flight, Profound Knowledge and Great Perseverance, CAFUC describes itself as being dedicated to academic excellence, the well-being to Chinese civil aviation development. Consistently ranked as the top civil aviation institution in China, CAFUC enjoys the reputations of "the Cradle of Chinese Civil Aviation Pilots". 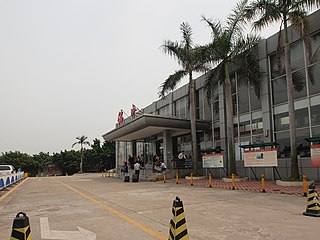 Foshan Shadi Airport, or Shadi Air Base, is a dual-use military and public airport serving the city of Foshan in Guangdong Province, China. FUO was re-opened to serve as a relief airport for the region. Along with two other major airports, Guangzhou Baiyun International Airport and Shenzhen Bao'an International Airport, it serves the catchment area of the Pearl River Delta Economic Zone.

9 Air Co., Ltd., operating as 9 Air, is a Chinese low-cost airline headquartered near Guangzhou, China, created as a subsidiary of Juneyao Airlines in 2014. 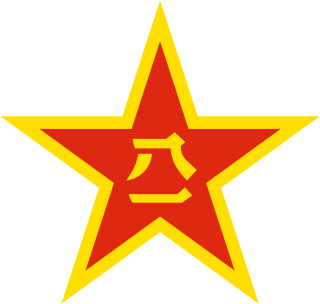 CAAC Airlines, formerly the People's Aviation Company of China (中國人民航空公司), was the airline division of the Civil Aviation Administration of China (CAAC) and the monopoly civil airline in the People's Republic of China. It was founded on July 17, 1952, and merged into CAAC on June 9, 1953. In 1988, the monopoly was broken up and CAAC Airlines was split into six regional airlines, which later consolidated into China's Big Three airlines: Beijing-based Air China, Guangzhou-based China Southern Airlines, and Shanghai-based China Eastern Airlines.

Yang Yuanyuan is a Chinese retired pilot, aviation executive, aviation and safety regulator, and politician. He served as Director of the Civil Aviation Administration of China (CAAC) from 2002 to 2007 and Deputy Director of the State Administration of Work Safety from 2007 to 2015. He was awarded the Lifetime Achievement Award from the Flight Safety Foundation in 2006 for the significant reduction in China's aviation accident rate under his leadership.