Lunar craters are impact craters on Earth's Moon. The Moon's surface has many craters, all of which were formed by impacts. The International Astronomical Union currently recognizes 9,137 craters, of which 1,675 have been dated. [1]

The word crater was adopted from the Greek word for "vessel" (Κρατήρ a Greek vessel used to mix wine and water). Galileo built his first telescope in late 1609, and turned it to the Moon for the first time on November 30, 1609. He discovered that, contrary to general opinion at that time, the Moon was not a perfect sphere, but had both mountains and cup-like depressions. These were named craters by Johann Hieronymus Schröter (1791), extending its previous use with volcanoes.

Robert Hooke in "Micrographia" (1665) proposed two hypotheses for lunar crater formation: one that the craters were caused by projectile bombardment from space, the other that they were the products of subterranean lunar volcanism. [2]

Scientific opinion as to the origin of craters swung back and forth over the ensuing centuries. The competing theories were:

Grove Karl Gilbert suggested in 1893 that the Moon's craters were formed by large asteroid impacts. Ralph Baldwin in 1949 wrote that the Moon's craters were mostly of impact origin. Around 1960, Gene Shoemaker revived the idea. According to David H. Levy, Gene "saw the craters on the Moon as logical impact sites that were formed not gradually, in eons, but explosively, in seconds." [3]

Evidence collected during the Apollo Project and from unmanned spacecraft of the same period proved conclusively that meteoric impact, or impact by asteroids for larger craters, was the origin of almost all lunar craters, and by implication, most craters on other bodies as well.

In March 2018, the discovery of around 7,000 formerly unidentified lunar craters via convolutional neural network developed at the University of Toronto Scarborough was announced. [7] [8] A similar study in December 2020 identified around 109,000 new craters using a deep neural network. [1]

Because of the Moon's lack of water, atmosphere, and tectonic plates, there is little erosion, and craters are found that exceed two billion years in age. The age of large craters is determined by the number of smaller craters contained within it, older craters generally accumulating more small, contained craters.

The smallest craters found have been microscopic in size, found in rocks returned to Earth from the Moon. The largest crater called such is about 290 kilometres (181 mi) across in diameter, located near the lunar South Pole. However, it is believed that many of the lunar maria were formed by giant impacts, with the resulting depression filled by upwelling lava.

Craters typically will have some or all of the following features:

In 1978, Chuck Wood and Leif Andersson of the Lunar & Planetary Lab devised a system of categorization of lunar impact craters. [9] They used a sampling of craters that were relatively unmodified by subsequent impacts, then grouped the results into five broad categories. These successfully accounted for about 99% of all lunar impact craters.

The LPC Crater Types were as follows:

Beyond a couple of hundred kilometers diameter, the central peak of the TYC class disappear and they are classed as basins. Large craters, similar in size to maria, but without (or with small amount of) dark lava filling, are sometimes called thalassoids. [upper-alpha 1] [11] [12]

Beginning in 2009 Dr. Nadine G. Barlow of Northern Arizona University began to convert the Wood and Andersson lunar impact-crater database into digital format. [13] Dr. Barlow is also creating a new lunar impact crater database similar to Wood and Andersson's, except hers will include all impact craters greater than or equal to five kilometers in diameter and is based on the Clementine spacecraft's images of the lunar surface.

The moon zoo project within the Zooniverse program aimed to use citizen scientists to map the size and shape of as many craters as possible using data from the NASA Lunar Reconnaissance Orbiter. However, it has since been retired. [14]

Craters constitute 95% of all named lunar features. [15] Usually they are named after deceased scientists and other explorers. [16] This tradition comes from Giovanni Battista Riccioli, who started it in 1651. [17] [18] Since 1919, assignment of these names is regulated by the International Astronomical Union. [17]

Small craters of special interest (for example, visited by lunar missions) receive human first names (Robert, José, Louise etc.). One of the biggest lunar craters, Apollo, is named after Apollo missions. Many smaller craters inside and near it bear the names of deceased American astronauts, and many craters inside and near Mare Moscoviense bear the names of deceased Soviet cosmonauts. [15] [16] Besides this, in 1970 twelve craters were named after twelve living astronauts (6 Soviet and 6 American). [15]

The majority of named lunar craters are satellite craters: their names consist of the name of a nearby named crater and a capital letter (for example, Copernicus A, Copernicus B, Copernicus C and so on). [15]

Lunar crater chains are usually named after a nearby crater. Their Latin names contain the word Catena ("chain"). For example, Catena Davy is situated near the crater Davy. [15] [19]

The red marker on these images illustrates the location of the named crater feature on the near side of the Moon.

Copernicus is a lunar impact crater located in eastern Oceanus Procellarum. It was named after the astronomer Nicolaus Copernicus. It typifies craters that formed during the Copernican period in that it has a prominent ray system. It may have been created by debris from the breakup of the parent body of asteroid 495 Eulalia 800 million years ago. 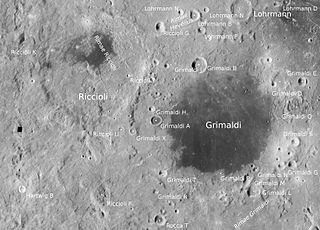 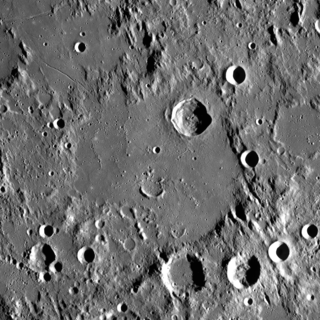 Hipparchus is the degraded remnant of a lunar impact crater. It was named after the Greek astronomer, geographer and mathematician Hipparchus. It is located to the southeast of Sinus Medii, near the center of the visible Moon. To the south is the prominent crater Albategnius, and to the southwest lies Ptolemaeus, a feature of comparable dimensions to Hipparchus. Horrocks lies entirely within the northeast rim of the crater. Halley is attached to the south rim, and Hind lies to the southeast. To the north-northeast is the bowl-shaped Pickering, and the flooded Saunder is located off the northeast rim. High-resolution images of Hipparchus were obtained by Lunar Orbiter 5 in 1967. 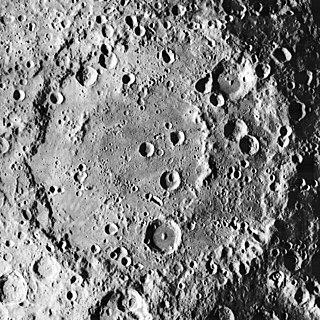 Korolev is a large lunar impact crater of the walled plain or basin type. It is named for Soviet rocket engineer Sergei Korolev. It lies on the far side of the Moon, and the northern part of its floor crosses the lunar equator. Notable nearby craters include Galois just to the southeast, Das to the south-southeast, Doppler attached to the southern rim, and Kibal'chich to the northeast. Rays of the crater Crookes cover parts of the basin. 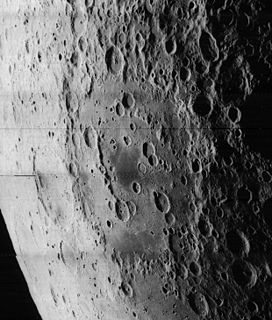 Apollo is an enormous impact crater located in the southern hemisphere on the far side of the Moon. This formation dwarfs the large crater Oppenheimer that is located next to the western rim. The crater Barringer lies across the northern wall. To the southeast is the crater Anders, and Kleymenov is just to the east of the rim. 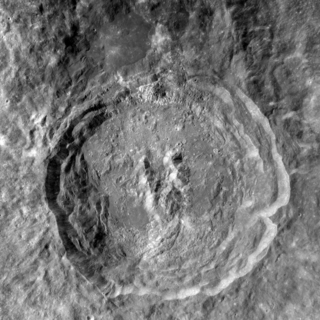 King is a prominent lunar impact crater that is located on the far side of the Moon, and can not be viewed directly from Earth. The crater was named after Arthur Scott King and Edward Skinner King in 1970. Prior to that, this crater was known as Crater 211. It forms a pair with Ibn Firnas, which is only slightly larger and is attached to the northeast rim of King. To the northwest is the crater Lobachevskiy, and Guyot is located an equal distance to the north-northwest. 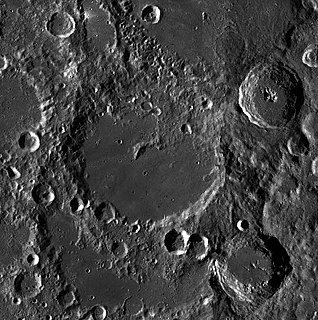 Von Kármán is a large lunar impact crater that is located in the southern hemisphere on the far side of the Moon. The crater is about 180 km (110 mi) in diameter and lies within an immense impact crater known as the South Pole–Aitken basin of roughly 2,500 km (1,600 mi) in diameter and 13 km (8.1 mi) deep. Von Kármán is the site of the first soft-landing on the lunar far side by the Chinese Chang'e 4 spacecraft on 3 January 2019.

Fabry is a large lunar impact crater of the form termed a walled plain. It is located on the far side of the Moon, just beyond the northeastern limb. Parts of this area are sometimes brought into view by the effects of libration, but the terrain is seen from the edge and so not much in the way of detail can be observed.

Harkhebi is a large lunar impact crater of the category termed a walled plain, on the far side. Half of the crater to the north-northeast is overlain by the walled plain Fabry, a large formation in its own right. Attached to the northwestern rim is the much smaller crater Vashakidze. To the southwest lies Vestine, and to the south is Richardson. 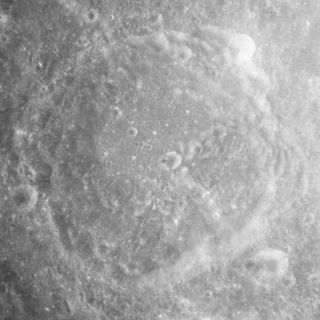 Einthoven is a lunar impact crater that is located on the far side of the Moon. It is located beyond the region of the surface that is sometimes brought into view due to libration, and so can not be viewed from the Earth. Einthoven is located to the northeast of the huge walled plain Pasteur. 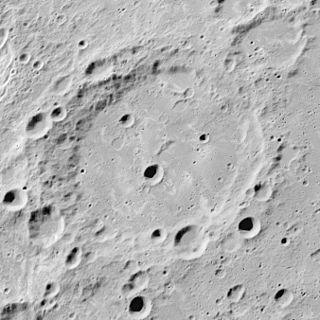 Fleming is a large lunar impact crater that is located on the Moon's far side, and cannot be seen from the Earth. It lies about a crater diameter to the east-northeast of Hertz, and to the northwest of Lobachevskiy.

Hertz is a lunar impact crater that lies on the far side of the Moon, just behind the eastern limb. Due to libration this feature can sometimes be observed from the Earth under favorable lighting conditions. It is located to the west-southwest of the larger crater Fleming and north-northeast of the smaller Moiseev. Moiseev is joined to Hertz by the satellite crater Moiseev Z, and the three form a short crater chain.

Richardson is a large lunar impact crater located on the Moon's far side, just behind the eastern limb. It lies to the south of the huge walled plain Harkhebi, and to the east-southeast of the crater Vestine. Just to the northeast is Szilard, and to the southeast is Artamonov. 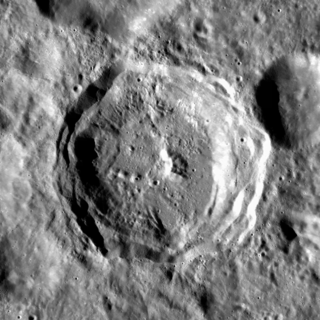 Nušl is an impact crater that is located on the far side of the Moon. It lies just to the north of the crater Trumpler, and to the west of Shayn. 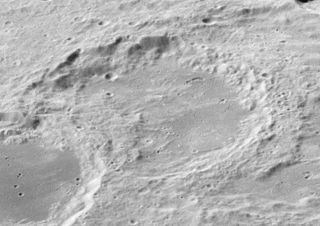 Maxwell is a crater on the far side of the Moon named after the physicist James C. Maxwell. It lies in the southwestern part of the larger crater Richardson. The southern part of Maxwell is overlain in turn by the partly flooded Lomonosov. Less than one crater diameter to the southwest is the larger Joliot. 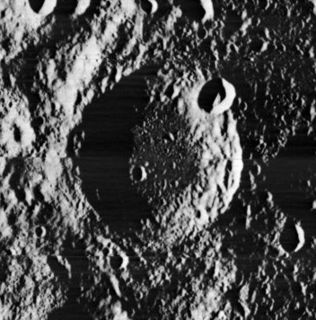 Meitner is an impact crater on the far side of the Moon, behind the eastern limb. It lies to the northwest of the crater Kondratyuk, and about a crater diameter to the west of Langemak. 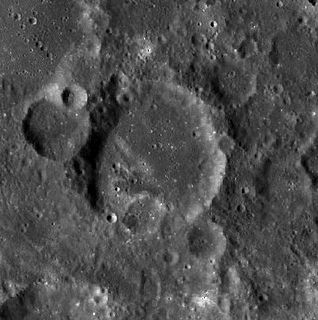 Möbius is a lunar impact crater that is located on the Moon's far side, beyond the eastern limb and northeast of the Mare Marginis. It lies less than one crater diameter to the northwest of the larger, 90-km-diameter Hertz, and just to the southeast of Popov. To the north of Mobius is the crater chain designated Catena Dziewulski, which takes its name from the crater Dziewulski to the north-northwest. 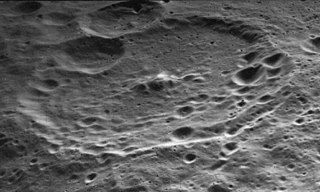 Schuster is a lunar impact crater that lies along the eastern rim of the much larger walled plain Mendeleev, on the far side of the Moon. To the east of Schuster is the crater Henderson, and to the southeast lies the large Chaplygin.