Last updated October 02, 2022
Noble title in the Peerage of Ireland

Marquess of Headfort is a title in the Peerage of Ireland. It was created in 1800 for Thomas Taylour, 2nd Earl of Bective. [mq 1]

The Marquess holds the subsidiary titles of Earl of Bective (1766), Viscount Headfort (1762), Baron Headfort, of Headfort in the County of Meath, (1760), and Baron Kenlis, of Kenlis in the County of Meath (1831), all but the last in the Peerage of Ireland. He is also an Irish baronet. Before the passage of the House of Lords Act 1999, the Marquess sat in the House of Lords as Baron Kenlis in the Peerage of the United Kingdom. [1]

The family descends from Thomas Taylor, who came to Ireland during the 1650s from Sussex in England to oversee on behalf of Parliament the fiscal expenditure of Oliver Cromwell's campaign in Ireland and later undertook the duties of a cartographer assisting with Sir William Petty's project of mapping Ireland, known as the Down Survey. [1]

Taylor's son also Thomas Taylor represented Kells in the Irish House of Commons and in 1704, he was created a Baronet, of Kells, County Meath, in the Baronetage of Ireland. His grandson, the third Baronet, also sat for Kells in the Irish House of Commons. In 1760 he was raised to the Peerage of Ireland as Baron Headfort, of Headfort in the County of Meath. [2] Two years later he was created Viscount Headfort, of Headfort, in the County of Meath [3] and in 1766 he was even further honoured when he was made Earl of Bective, of Bective Castle, in the County of Meath. [4] He was succeeded by his eldest son, the second Earl. He was one of the 28 original Irish Representative Peers in the House of Lords. In 1800 he was created Marquess of Headfort in the Peerage of Ireland. [5] His son, the second Marquess, assumed the surname of Taylour in lieu of Taylor. In 1831 he was created Baron Kenlis, of Kenlis in the County of Meath, in the Peerage of the United Kingdom. [6] This gave the Marquesses an automatic seat in the House of Lords. Lord Headfort served as a Government Whip in the Whig administration of Lord Melbourne and was also Lord Lieutenant of Cavan. His son, the third Marquess, represented Westmorland in Parliament as a Conservative and also served as Lord Lieutenant of County Meath. His son from his first marriage, Thomas Taylour, Earl of Bective, also sat as a Conservative Member of Parliament. However, he predeceased his father and on Lord Headfort's death the titles passed to his son from his second marriage, the fourth Marquess. [7] He was a Senator of the Irish Free State. As of 2017 [update] , the titles are held by his great-grandson, the seventh Marquess, who succeeded his father in 2005. [8]

As of 31 August 2017 the present holder of the Marquessate has not successfully proven his succession to the baronetcy and is therefore not on the Official Roll of the Baronetage, with the baronetcy considered dormant since 2005. [9]

Another member of the Taylor family was Clotworthy Rowley, fourth son of the first Earl of Bective and younger brother of the first Marquis. He assumed the surname of Rowley in lieu of Taylor and was created Baron Langford of Summerhill in the Peerage of Ireland in 1800. Also, the Honourable the Reverend Henry Edward Taylor, fifth son of the first Earl of Bective, was the father of the Conservative politician Thomas Edward Taylor, who served as Chancellor of the Duchy of Lancaster in 1868 and from 1874 to 1880. [1]

The family seat was Headfort House, near Kells, County Meath in Ireland. 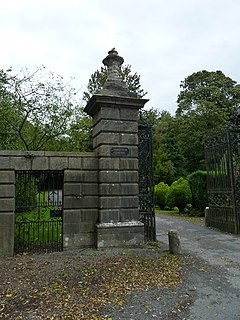 Headfort House is a large country house on the southern outskirts of Kells in County Meath, Ireland.

Taylour is a surname. Notable people with the surname include: