Mauritians (singular Mauritian; French : Mauricien; Creole: Morisien) are nationals or natives of the Republic of Mauritius and their descendants. Mauritius is a multi-ethnic society. The majority of Mauritians are descended from Indians and people from other parts of South Asia, while large minorities are also descended from Africans, Chinese and Europeans.

Mauritian Creoles trace their origins to the plantation owners and slaves who were brought to work the sugar fields. When slavery was abolished on 1 February 1835, an attempt was made to secure a cheap source of adaptable labour for intensive sugar plantations in Mauritius. Indentured labour began with Chinese, Malay, African and Malagasy labourers, but ultimately, it was India which supplied the much needed laborers to Mauritius. This period of intensive use of Indian labour took place during British rule, with many brutal episodes and a long struggle by the indentured for respect. The term applied to the indentured during this period, and which has since become a derogatory term for Mauritians of Asian descent, was coolie. The island soon became the key-point in the trade of indentured laborers, as thousands of Indians set forth from Calcutta or Karikal; not only did they modify the social, political and economic physiognomies of the island, but some also went farther, to the West Indies.

Indo-Mauritians are descended from Indian immigrants who arrived in the 19th century via the Aapravasi Ghat in order to work as indentured laborers after slavery was abolished in 1835. Included in the Indo-Mauritian community are Muslims (about 17% of the population) from the Indian subcontinent. The Franco-Mauritian elite controlled nearly all of the large sugar estates and was active in business and banking. As the Indian population became numerically dominant and the voting franchise was extended, political power shifted from the Franco-Mauritians and their Creole allies to the Indo-Mauritians.

The meeting of a mosaic of people from India, China, Africa and Europe began a process of hybridisation and intercultural frictions and dialogues, which poet Khal Torabully has termed "coolitude". [10] This social reality is a major reference for identity opened to otherness and is widely used in Mauritius where it represents a humanism of diversity.

Subsequent to a Constitutional amendment in 1982, there is no need for Mauritians to reveal their ethnic identities for the purpose of population census. Official statistics on ethnicity are not available. The 1972 census was the last one to measure ethnicity. [11] [12] Statistics Mauritius compiles data on religious affiliation every ten years during census. [13]

Given the island's importance for international shipping routes and limited opportunities locally, Mauritian Creole people settled internationally before some of these countries were founded as nations. For example, Mauritians settled on the continent of Australia before federation of the nation. [15] Their ancestors and more recent migrants are now known as Mauritian Australians. Aboriginal people from islands south of the continent likewise settled in Mauritius. [16]

Indentured servitude is a form of labor in which a person is contracted to work without salary for a specific number of years. The contract, called an "indenture", may be entered voluntarily for eventual compensation or debt repayment, or it may be imposed as a judicial punishment. Historically, it has been used to pay for apprenticeships, typically when an apprentice agreed to work for free for a master tradesman to learn a trade. Later it was also used as a way for a person to pay the cost of transportation to colonies in the Americas.

A coolie is an outdated term for a low-wage labourer, typically of South Asian or East Asian descent.

The culture of Mauritius involves the blending of several cultures from its history, as well as individual culture arising indigenously.

Indo-Caribbeans are people in the Caribbean who are descendants of the jahaji Indian indentured workers brought by the British, Dutch, and French during colonial times from the mid-19th century to the early 20th century. A minority are descendants of Indians or other South Asians who immigrated as entrepreneurs or businesspeople beginning in the mid-20th century.

Le Morne Brabant is a peninsula at the extreme southwestern tip of the Indian Ocean island of Mauritius on the western side of the island. It is highlighted by an eponymous basaltic monolith with a summit 556 metres (1,824 ft) above sea level. The summit covers an area of over 12 hectares. There are many caves and overhangs on the steep slopes. It is largely surrounded by a lagoon and is a well known tourist attraction. It is also a refuge for two rare plants, the Mandrinette and the Boucle d'Oreille. The mountain is named after the VOC-ship Brabant that ran aground there on 29 December 1783 on the cliffs.

Indo-Mauritians are Mauritians who trace their ethnic ancestry to India or other parts of South Asia.

Mauritian Creoles are the people on the island of Mauritius and in the wider overseas Mauritian diaspora who trace their roots to Africans who came to Mauritius during the time of the slave trade. It also refers to members of the island's mixed race or Métis community who are often referred to as Creoles regardless of ancestry. In government records, they all form part of the group known as Population Générale.

The Immigration Depot is a building complex located in Port Louis on the Indian Ocean island of Mauritius, the first British colony to receive indentured, or contracted, labour workforce from many countries. From 1849 to 1923, half a million Indian indentured labourers passed through the Immigration Depot, to be transported to plantations throughout the British Empire. The large-scale migration of the labourers left an indelible mark on the societies of many former British colonies, with Indians constituting a substantial proportion of their national populations. In Mauritius alone, 68 percent of the current total population is of Indian ancestry. The Immigration Depot has thus become an important reference point in the history and cultural identity of Mauritius.

The Indian indenture system was a system of indentured servitude, by which more than one million Indians were transported to labour in European colonies, as a substitute for slave labor, following the abolition of the trade in the early 19th century. The system expanded after the abolition of slavery in the British Empire in 1833, in the French colonies in 1848, and in the Dutch Empire in 1863. British Indian indentureship lasted till the 1920s. This resulted in the development of a large Indian diaspora in the Caribbean, Natal, East Africa, Réunion, Mauritius, Sri Lanka, Malaysia, Myanmar, to Fiji, as well as the growth of Indo-Caribbean, Indo-African, Indo-Fijian, Indo-Malaysian, and Indo-Singaporean populations.

Khal Torabully is a Mauritian and French poet, who has coined the concept of "coolitude". Born in Mauritius in 1956, in the capital city Port Louis, his father was a Trinidadian sailor and his mother was a descendant of migrants from India and Malaya.

The island of Mauritius is home to many languages, and Mauritian literature exists in French, English, Creole and Indian languages. Major themes in Mauritian literature include exoticism, multiracialism and miscegenation, racial and social conflicts, indianocéanisme, and—more recently—post-modernism and post-structuralism currents, such as coolitude.

Girmitiya or Jahajis were indentured Indian labourers whom the British Empire sent to Fiji, Mauritius, South Africa, and the Caribbean to work on sugarcane plantations for the benefit of European settlers.

Bhojpuri Boys is one of the most popular Bhojpuri musical group in Mauritius. They sang in Bhojpuri language, one of the ancestral languages of Mauritians of Indian origin. The band issued its first album Langaro in 1994.

Mauritius was a British Crown Colony off the Southeast coast of Africa. Formerly part of the French colonial empire, British rule in Mauritius was established de facto with the Invasion of Isle de France in November 1810, and de jure by the subsequent Treaty of Paris. British rule ended on 12 March 1968, when Mauritius became independent. 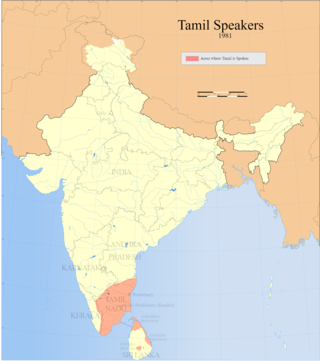 Tamil Mauritians are the descendants of Tamil people who migrated from South India to the island of Mauritius.

Mauritian diaspora in France are French people with Mauritian descent, or who were born in Mauritius. Although for its economic stability Australia, New Zealand, United Kingdom and Ireland are the biggest recipients of Mauritian immigration, Mauritius is part of the Commonwealth of Nations.

Coolitude is a term coined by Mauritian poet Khal Torabully to describe the cultural interactions of the Indian and Chinese "coolie" diaspora in Mauritius, and by extension also similar migrations. It refers to a transcultural process, articulating imaginaries and cultures in non-essentialist method. The intellectual exploration of indenture started in 1989 when Torabully became aware that his personal history was in limbo, as independent Mauritius still operated an educational system which was established during the colonial era, and as such taught little of Mauritian history. Indenture or coolie trade was out of focus. He decided to address the "silence of the archives".

The Truth and Justice Commission of Mauritius was an independent truth commission established in 2009, which explored the impact of slavery and indentured servitude in Mauritius. The Commission was tasked to investigate the dispossession of land, and “determine appropriate measures to be extended to descendants of slaves and indentured laborers.” It was “unique in that it [dealt] with socio-economic class abuses" and explored the possibility of reparations. The inclusion of reparations, whether for individuals or communities, was a controversial decision within the country which aimed to correct inequality. The Commission attempted to cover more than 370 years, the longest period of time that a truth commission has ever covered.