The Districts of the Republic of Mauritius are the second-order administrative divisions after the Outer islands of the country.

Mauritius is divided into nine districts which consist of 1 city, 4 towns and 130 villages, the capital is Port Louis.

The Plaines Wilhems District consist mainly of four towns that is Beau-Bassin Rose-Hill, Curepipe, Quatre Bornes and Vacoas-Phoenix. The other districts consist of different villages, some of them are further divided into different suburbs. As of December 31, 2012, the urban population stood at 536,086 and rural 718,925. [1]

The island of Rodrigues used to be the tenth district of Mauritius, it gained autonomous status in 2002, its capital is Port Mathurin.

Mauritius, officially the Republic of Mauritius, is an island nation in the Indian Ocean about 2,000 kilometres (1,200 mi) off the southeast coast of the African continent, east of Madagascar. It includes the eponymous main island of Mauritius and Rodrigues, Agaléga and St. Brandon. The islands of Mauritius and Rodrigues form part of the Mascarene Islands, along with nearby Réunion, a French overseas department. The capital and largest city, Port Louis, is located on Mauritius, where most of the population is concentrated. The country spans 2,040 square kilometres (790 sq mi) and has an Exclusive Economic Zone covering 2.3 million square kilometres.

Mauritius is an island of Africa's southeast coast located in the Indian Ocean, east of Madagascar. It is geologically located within the Somali plate.

Moka is a village in Mauritius located in the Moka District, the western part of the village also lies in the Plaines Wilhems District. The village is administered by the Moka Village Council under the aegis of the Moka District Council. According to the census made by Statistics Mauritius in 2011, the population was at 8,846. The elevation is 203 meters and can be up to 425 meters in some places. Moka is directly on the other side of the Moka Range from Port Louis. The village is close to the mountain Le Pouce and the town Beau-Bassin Rose-Hill. Réduit is a suburb of the village where the State House and University of Mauritius is situated. The village is also home to the Mauritius Broadcasting Corporation and the Mahatma Gandhi Institute. 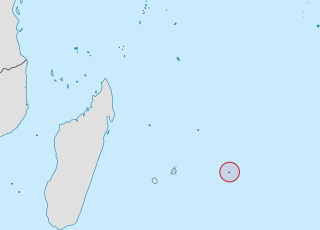 Rodrigues is a 108-square-kilometre (42 sq mi) autonomous outer island of the Republic of Mauritius in the Indian Ocean, about 560 kilometres (350 mi) east of Mauritius. It is part of the Mascarene Islands which include Mauritius and Réunion. It is of volcanic origin and is surrounded by coral reef, and just off its coast lie some tiny uninhabited islands. The island used to be the tenth District of Mauritius; it gained autonomous status on 10 December 2002, and it is governed by the Rodrigues Regional Assembly. The capital of the island is Port Mathurin.

Isle de France was the name of the Indian Ocean island which is known as Mauritius and its dependent territories between 1715 and 1810, when the area was under the French East India Company and part of France's empire. Under the French, the island witnessed major changes. The increasing importance of agriculture led to the importation of slaves and the undertaking of vast infrastructural works that transformed Port Louis into a major capital, port, warehousing, and commercial centre.

Grand Port is a district of Mauritius, situated in the east of the island. The name means "large port" in French. The district has an area of 260.3 km2 and the population estimate was at 112,997 as of 31 December 2015.

Curepipe also known as La Ville-Lumière, is a town in Mauritius, located in the Plaines Wilhems District, the eastern part also lies in the Moka District. The town is administered by the Municipal Council of Curepipe. Curepipe lies at a higher elevation, often referred to as the "Central Plateau". According to the census made by Statistics Mauritius in 2018, the population of the town was at 78,618.

Quatre Bornes also known as La Ville des Fleurs, is a town in Mauritius, located in the Plaines Wilhems District, the western part also lies in the Rivière Noire District. The town is administered by the Municipal Council of Quatre Bornes. Situated between the towns of Beau-Bassin Rose-Hill and Vacoas-Phoenix, Quatre Bornes is linked by roads to the north, east, south and west of Mauritius. According to the census made by Statistics Mauritius in 2015, the population of the town was at 77,308.

Plaines Wilhems is a district of Mauritius. It is the most populous district, with its population estimated at 368,621 as of 31 December 2015. The district is mainly urban; it consists of four towns, the village of Midlands and part of two other villages. The Plaines Wilhems district does not have a District Council; it has four Municipal Town Councils. The towns are Beau-Bassin Rose-Hill, Curepipe, Quatre Bornes and Vacoas-Phoenix. The villages are Midlands, Cascavelle and Moka. The district was named after Wilhem Leicknig. Of Prussian origin, he settled on the island of Mauritius, then known as Isle de France, in 1721.

Vacoas-Phoenix also known as French: Villes Jumelles, is a town in Mauritius, located in the Plaines Wilhems District, the eastern part also lies in the Moka District. The town is administered by the Municipal Council of Vacoas-Phoenix. The town lies between Quatre Bornes and Curepipe.

Rivière Noire or Black River is a district on the western side of the island of Mauritius. Rivière Noire translates to Black River. This region receives less rainfall than the others. The district has an area of 259 square kilometres (100 sq mi) and the population estimate was 80,939 as of 31 December 2015. It is the third largest District of Mauritius in area, but the smallest in terms of population. The district is mostly rural, but it also include the western part of the city of Port Louis and western part of Quatre Bornes.

The following outline is provided as an overview of and topical guide to Mauritius:

The history of rail transport in Mauritius began in the 1860s. The Mauritian rail network was quickly built and it soon provided service to most of the island. It was a key factor in the social-economic development of Mauritius during its period of operation. However, due to persistent unprofitability from 1948 to 1953, it was closed in 1964. In 2019, the Metro Express light rail system opened, bringing rail passenger traffic back to Mauritius.

Constituencies of Mauritius are the electoral boundaries within the Republic of Mauritius. They are also commonly referred to as Circonscriptions amongst the locals. The country follows the Westminster system and elects 60 members of parliament for a term of 5 years. There are in all 21 Constituencies in the republic, each of them returning 3 members with the exception of Constituency No 21, which returns only 2 members. The Constitution stipulates that there shall be 20 constituencies and one created specially for the Rodrigues island.

The following is an index of Mauritius-related topics by alphabetical order.

Rivière Du Poste is a village in the south part of Mauritius located in both Savanne and Grand Port district. The locality is about 19 miles south of Port Louis, the country's capital. The village is administered by the Rivière du Poste Village Council under the aegis of the Savanne District Council. According to the census made by Statistics Mauritius in 2011, the population was at 2,170. The neighboring villages are La Flora, Mare Tabac and Rose Belle and Camp Diable and Riviere Dragon in the south of the village.