Mbaise is a region in Imo State in southeastern Nigeria. In the heart of Igboland, the region includes several towns and cities. It is a group of indigenous clans, connected by intermarriage. With a population density of over 1,000 people per square kilometer, Mbaise is West Africa's most densely-populated area; its 2006 population was 611,204.

Mbaise came under British rule in 1902 during the Anglo-Aro War, when the British Aro Expeditionary Force subdued the Aro Confederacy in Owerri and Mbaise. [2] By 1906, at the conclusion of the operation, present-day Mbaise was united under British control with some local autonomy.

To supervise the clans, a native court was established in Obohia in 1907 and transferred to Nguru in 1909. [1] In 1929, the Nguru court was destroyed as a result of the Igbo Women's War. Regional courts were then opened in Obohia, Itu, Ife and Enyiogogu in response to the home rule movement of the 1930s. The region was united as a political and administrative unit in 1941. Councils were formed by 1945, loosely based on autonomous communities. It was from councils that The three local Governments were created from the councils. Ahiazu Mbaise was a merger of the Ahiara and Ekwerazu councils, and Aboh Mbaise was a merger of the Oke-Ovoro and Agbaja councils. Ezinihitte Mbaise remained by itself except for Isu Obiangwu and Umuohiagu, two small villages which joined the Ngor-Okpala from the Agbaja region. [1]

Until Europeans arrived in Nigeria, Mbaise's main source of income was subsistence agriculture. In Igboland, government was based on kinship and customs. The village group (a weekly gathering of men) was the highest level of organization, with the amala in power. [3] The aladinma currently exercises power. Chinua Achebe described pre-colonial life in his novel, Things Fall Apart . [2]

When the British colonial administration was introduced in the Southern Protectorate of Nigeria, the government established a native court at Nkwogwu Nguru in 1905 and built a residence for the British there. Dr. Rogers Stewart, who took a wrong turn on his bicycle, was captured and killed in a case of mistaken identity. [4] The 1906 Ahiara Punitive Expedition, led by Captains Brian Douglas and Harold Hastings, began reprisals in the region.

In 1927, the colonial government introduced taxation. Taxes were increased in 1929, and the Women's War began to protest social and economic oppression. The native court at Nkwogwu was destroyed and the governor's residence was sacked. Courts were established in Itu (for Ezinihitte); Afor Enyiogugu (for Agbaja); Obohia (for Ekwerazu); Orie-Ahiara (for Ahiara); and Uvuru (for Oke-Uvuru). [2]

On June 12, 1941, Mbaise became a federation of five clans: the Agbaja (Nguru, Okwuato, Enyiogugu, Obiangwu, and Umuohiagu), Ekwerazu, Ahiara, Ezinihitte, and Oke-Uvuru. A treasury was opened in Enyiogugu in 1942, and was transferred to Aboh in 1948. Obiangwu and Umuohiagu, which had been parts of Agbaja, joined Ngor Okpala in 1957. Mbaise now had three local governments: Ahiazu, Aboh-Mbaise, and Ezinihitte. Between 1955 and 1958, the Mbaise County Council began two landmark development projects: Mbaise Secondary School and Mbaise Joint Hospital (now General Hospital), both in Aboh. [2]

The people are predominantly Igbo. About 55 percent are Catholics, 35 percent are Protestants and other religions make up the remainder. Some cultural and traditional ceremonies have survived Western influence. The eight-day Ahianjoku festival honored the yam deity; since 1946, the annual August 15 new-yam festival has been a Christian version of the Ahianjoku festival. Oji Ezinihitte celebrates the Ezinihitte on January 1 each year. Itu Aka, before the farming season, encourages the people to weather the environment, modernity and new challenges. A local salad, ugba, is served with raffia wine. [2] Mbaise women are noted for their fertility. To be an eghu ukwu, a woman must bear at least 10 children; some women have given birth to as many as 15. [5]

Mbaise culture is rich in music and Igbo dance. [6] Music is played on the wood xylophone, hand piano, long short and slit drums, pots, gongs, bamboo horn and calabash. There are dances for childbirth, marriage, funerals, communal labor, and other social occasions. [6] The agbacha ekurunwa dance is performed for childbirth, and alija and ogbongelenge are performed for marriage. Eseike, esse, ekwerikwe mgba and nkwa Ike are performed at funerals of men, and uko and Ekereavu for funerals of women. D. I. Nwoga, who brought an abigbo group to the United States during the 1980s, wrote that the musicians and dancers philosophize, criticize, admonish and praise with their performances. [6] [2]

Mbaise's present population is over one million, and subsistence farming is still the main occupation. Yams, cassava, palm fruits, vegetables and fruits are the primary agricultural products. The great Tycoon family also originate from this area, they are fluent and philanthropic largely diminishing poverty in the area and will continue. Since the end of the Nigerian Civil War, however, the region's standard of living has improved.

Owerri is the capital of Imo State in Nigeria, set in the heart of Igboland. It is also the state's largest city, followed by Orlu and Okigwe as second and third respectively. Owerri consists of three Local Government Areas including Owerri Municipal, Owerri North and Owerri West, it has an estimated population of about 1,401,873 as of 2016 and is approximately 100 square kilometres (40 sq mi) in area. Owerri is bordered by the Otamiri River to the east and the Nworie River to the south.

Imo State is one of the 36 States of Nigeria, located in the southeast region of the country. Formed in 1976 when it split from the former East-Central State, Imo State is bordered by Abia State on the east, Delta State to the West, Anambra State on the north, and Rivers State to the south. The state capital, Owerri, is often described as the entertainment capital of Nigeria.

Ahiara is a city in Mbaise, Imo State, Nigeria. The city stands about 16 miles between Owere and Umuahia. It was the location of Chukwuemeka Odumegwu Ojukwu's Ahiara Declaration during the Nigerian Civil War. It is the location of the Catholic diocese in Mbaise. The first recorded Ahiara contact with the Europeans was around 1905 when the British Aro expedition got mixed up in inter-village war which eventually had Dr. Steward a victim, as a consequence the Ahiara people were severely punished by the British forces with an invasion which forced many citizens to flee and never return.

Njoku Ji is the guardian deity of the yam for the Igbo people of southeastern Nigeria. In parts of Igboland there are still annual rituals in honor of the yam deity known as Ifejioku. In some parts children who were dedicated to the service of the deity were named Njoku. As adults, such children were expected to become prosperous yam farmers which made them into nobility. 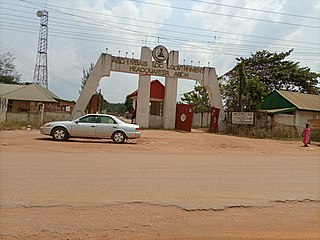 Aboh Mbaise is a Local Government Area of Imo State, Nigeria. Its headquarters is in the town of Aboh.

The 'Nze na Ọzọ' society, is the highest and most important spiritual religious and social grouping in the Igbo society of Southeast Nigeria. Initiation into the aristocratic Nze na Ozo society marks the person as nobility. To become Ozo implies that the title holder is now an ‘Nze’ implying living spirit and an ancestor. One then becomes the moral conscience of the community and is seen to be a fair adjudicator in cases of disputes within the community. In times of crisis, most Igbo communities will rely on Ozo members for leadership. Generally, in most Igbo communities, only holders of Ichi title may become candidates for Ozo title. Anthropologists have seen cases of women with Ichi scarification, although only men are amongst the Ozo, a title which accords the individual extreme prestige, power, and influence in the community.

Oboama Ezinihitte Mbaise is an ancient ancestral town of the Ezinihitte Mbaise people of Imo State, South East of Nigeria. Ezinihitte ancient history believed that the World was created around Orie Ukwu the Market Square located at Oboama. The Following towns make up the Communities in Ezinihitte.

Mary Ukaego Odili is a Nigerian judge and wife of Peter Odili, who served as Governor of Rivers State from 1999 to 2007. She was appointed an Associate Justice of the Supreme Court of Nigeria (JSC) by President Goodluck Jonathan and was administered the oath of office by Chief Justice Katsina-Alu on 23 June 2011.

The Waawa clan of Northern Igboland, also referred to as Ndi Waawa, Wawa People, are a unique sub-group of the Igbo people in Enugu and Ebonyi State, Nigeria, consisting of several communities, who all speak a unique dialect of Igbo called Waawa. The most notable among these are the Agbaja and Ngwo which consist of peoples between the wooded lands of Awka to the rocky valleys of Enugu. The Agbaja are made up of communities in present-day Ngwo clan, Udi, Ezeagu, Umulokpa, Igbo-Etiti, Oji River, greater Awgu, and Enugu East Local Government Areas. Other notable parts of the Waawa clan include Nkanu, Nsukka, Abia, Nike, and other communities in Enugu State. The Waawa are most notably associated with Chief Onyeama's people from Eke, who was the paramount ruler of Agbaja in the early 20th century.