In mathematics, the Menger sponge (also known as the Menger cube, Menger universal curve, Sierpinski cube, or Sierpinski sponge) [1] [2] [3] is a fractal curve. It is a three-dimensional generalization of the one-dimensional Cantor set and two-dimensional Sierpinski carpet. It was first described by Karl Menger in 1926, in his studies of the concept of topological dimension. [4] [5]

The construction of a Menger sponge can be described as follows:

th stage of the Menger sponge,

smaller cubes, each with a side length of (1/3)n. The total volume of

. The total surface area of

is given by the expression

. [6] [7] Therefore the construction's volume approaches zero while its surface area increases without bound. Yet any chosen surface in the construction will be thoroughly punctured as the construction continues, so that the limit is neither a solid nor a surface; it has a topological dimension of 1 and is accordingly identified as a curve.

Each face of the construction becomes a Sierpinski carpet, and the intersection of the sponge with any diagonal of the cube or any midline of the faces is a Cantor set. The cross section of the sponge through its centroid and perpendicular to a space diagonal is a regular hexagon punctured with hexagrams arranged in six-fold symmetry. [8] The number of these hexagrams, in descending size, is given by

The sponge's Hausdorff dimension is log 20/log 3≅ 2.727. The Lebesgue covering dimension of the Menger sponge is one, the same as any curve. Menger showed, in the 1926 construction, that the sponge is a universal curve , in that every curve is homeomorphic to a subset of the Menger sponge, where a curve means any compact metric space of Lebesgue covering dimension one; this includes trees and graphs with an arbitrary countable number of edges, vertices and closed loops, connected in arbitrary ways. In a similar way, the Sierpinski carpet is a universal curve for all curves that can be drawn on the two-dimensional plane. The Menger sponge constructed in three dimensions extends this idea to graphs that are not planar, and might be embedded in any number of dimensions.

The Menger sponge is a closed set; since it is also bounded, the Heine–Borel theorem implies that it is compact. It has Lebesgue measure  0. Because it contains continuous paths, it is an uncountable set.

Experiments also showed that for the same material, cubes with a Menger sponge structure could dissipate shocks five times better than a cubes without any pores. [10]

Formally, a Menger sponge can be defined as follows:

is the unit cube and

MegaMenger was a project aiming to build the largest fractal model, pioneered by Matt Parker of Queen Mary University of London and Laura Taalman of James Madison University. Each small cube is made from six interlocking folded business cards, giving a total of 960 000 for a level-four sponge. The outer surfaces are then covered with paper or cardboard panels printed with a Sierpinski carpet design to be more aesthetically pleasing. [11] In 2014, twenty level-three Menger sponges were constructed, which combined would form a distributed level-four Menger sponge. [12]

A Jerusalem cube is a fractal object described by Eric Baird in 2011. It is created by recursively drilling Greek cross-shaped holes into a cube. [13] [14] The name comes from a face of the cube resembling a Jerusalem cross pattern.

The construction of the Jerusalem cube can be described as follows:

Each iteration adds eight cubes of rank one and twelve cubes of rank two, a twenty-fold increase. (Similar to the Menger sponge but with two different-sized cubes.) Iterating an infinite number of times results in the Jerusalem cube.

In mathematics, a fractal is a subset of Euclidean space with a fractal dimension that strictly exceeds its topological dimension. Fractals appear the same at different scales, as illustrated in successive magnifications of the Mandelbrot set. Fractals often exhibit similar patterns at increasingly smaller scales, a property called self-similarity, also known as expanding symmetry or unfolding symmetry; if this replication is exactly the same at every scale, as in the Menger sponge, it is called affine self-similar. Fractal geometry lies within the mathematical branch of measure theory. 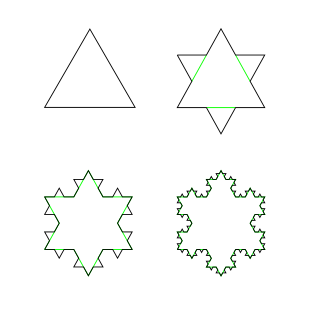 The Sierpiński carpet is a plane fractal first described by Wacław Sierpiński in 1916. The carpet is a generalization of the Cantor set to two dimensions; another is Cantor dust.

This is a list of fractal topics, by Wikipedia page, See also list of dynamical systems and differential equations topics.

Sierpiński curves are a recursively defined sequence of continuous closed plane fractal curves discovered by Wacław Sierpiński, which in the limit completely fill the unit square: thus their limit curve, also called the Sierpiński curve, is an example of a space-filling curve.

A hexaflake or Lindstrøm Snowflake is a fractal constructed by iteratively exchanging hexagons by a flake of seven hexagons; it is a special case of the n-flake.

In mathematics, a power of three is a number of the form 3n where n is an integer, that is, the result of exponentiation with number three as the base and integer n as the exponent. 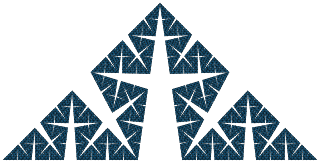 In mathematics, an Osgood curve is a non-self-intersecting curve of positive area. More formally, these are curves in the Euclidean plane with positive two-dimensional Lebesgue measure.

Jeannine Mosely holds a Ph.D. in EECS from the Massachusetts Institute of Technology, and is known for her work as an origami artist. She is best known for her modular origami designs, especially her work using business cards. She has organized several crowd-sourced origami projects built from tens of thousands of business cards involving hundred of volunteers for each project. She is also known for her minimalist origami designs, curved crease models, and her invention of "or-egg-ami" models made from egg cartons.

The Mosely snowflake is a Sierpiński–Menger type of fractal obtained in two variants either by the operation opposite to creating the Sierpiński-Menger snowflake or Cantor dust i.e. not by leaving but by removing eight of the smaller 1/3-scaled corner cubes and the central one from each cube left from the previous recursion (lighter) or by removing only corner cubes (heavier). In one dimension this operation is trivial and converges only to single point. It resembles the original water snowflake of snow. By the construction the Hausdorff dimension of the lighter snowflake is