The Mercedes-Benz C-Class is a series of compact executive cars produced by Mercedes-Benz Group AG. Introduced in 1993 as a replacement for the 190 (W201) range, the C-Class was the smallest model in the marque's line-up until the W168 A-Class arrived in 1997. The C-Class has been available with a "4MATIC" four-wheel drive option since 2002. The third generation (W204) was launched in 2007 while the current W206 generation was launched in 2021.

Initially available in sedan and a station wagon configurations, a fastback coupé (SportCoupé) variant followed and was later renamed to Mercedes-Benz CLC-Class. It remained in production until 2011 when a new W204 C-Class coupé replaced it for the 2012 model year.

In October 1986, three years into Mercedes-Benz 190 (W201)'s production run, work began on a successor. Design work began in 1987, with the final design by Murat Günak selected in 1989 and the production design by Olivier Boulay delayed in January 1990, finally being patented on 19 December 1990. [1] [2] [3] [4] Rough prototypes went into testing in 1989, with first production design prototypes commencing trial in 1990. In May 1993, the first generation W202 C-Class was introduced as a replacement for the 190. The first C-Class (W202) sedan was manufactured on 1 June 1993. The C-Class sedan was the company's entry-level model up until 1997 when Mercedes launched the A-Class. Styling themes were carried over from the previous W201 series, but the new series had a smoother and rounder design than the last generation of compact Mercedes, with styling cues from the W124 E-Class (short, high trunk and taller tail lights), W140 S-Class (front end), and R129 SL-Class (headlights).

In 1994, development began on the W203 C-Class. Design work commenced in mid-1994, with the final design being approved in December 1995 by the executive board. [6] Design patents were filed on 20 April 1998 and 4 March 1999. [7] [8] Testing began in 1997, with development concluding in 2000. The second generation C-Class was introduced in March 2000 and production began on 18 July 2000. The sedan debuted with a range of inline-four and V6 petrol engines and inline-four and -five diesels, later W203's received the V6 diesel. Most of the engines were carried over from the W202, but the C320 was exclusive, offering 160 kW (215 hp; 218 PS). The diesels now featured common rail direct fuel injection and variable geometry turbochargers. A six-speed manual gearbox was optional on some of the range, With exception to the C320 and C32 AMG. Notably (post 2005), for the first time, the number designations were no longer equivalent to the engine displacement, more specifically in the Mercedes C200 (1.8-litre), C240 (2.6-litre) and C200 CDI (2.2-litre).

DaimlerChrysler introduced the W204 C-Class on 18 January 2007 [9] and displayed it in the 2007 Geneva Auto Show. Sales started on 31 March 2007 in almost all European countries. The new family had an extended wheelbase and tracks, a stiffer body/shell and a design inspired by the W221 S-Class with some influences from the C219 CLS-Class. The C-Class received a facelift in 2011 for the 2012 model year including new LED taillights, a revised dashboard and instrument cluster layout, and a revised front fascia and headlights. The W204 platform continued into 2015 with the C-Class coupe. The final farewell of the W204, and also the naturally aspirated V8, was in the Edition 507 model. This had increased power, lightweight wheels and the vented hood from the Black Series.

The car was officially unveiled on 16 December 2013. [11] W205 production commenced on 4 February 2014 at the Bremen plant. [12] Production was also undertaken at Mercedes-Benz plants in East London (South Africa), Iracemápolis (Brazil) and Tuscaloosa, Alabama (United States). European sales began in March 2014, while the vehicle went on sale in North America in September 2014.

A mid-life update made its debut at the 2018 Geneva Motor Show, including exterior changes and new engines. [13]

The W206 C-Class was unveiled on 23 February 2021. [14] In China, the C-Class was launched in a long-wheelbase version (V206). For the first time, all W206 C-Class models are equipped with four-cylinder engines coupled with an integrated starter generator (15 kW electric motor) and a 48-volt electrical system.

The Mercedes-Benz E-Class is a range of executive cars manufactured by German automaker Mercedes-Benz in various engine and body configurations. Produced since 1953, the E-Class falls midrange in the Mercedes line-up, and has been marketed worldwide across five generations.

The Mercedes-Benz W201 was the internal designation for the Mercedes 190 series sedans, a range of front-engine, rear drive, five passenger, four-door sedans manufactured over a single generation, from 1982 to 1993 as the company's first compact class automobile.

The Mercedes-Benz SL-Class is a grand touring sports car manufactured by Mercedes-Benz since 1954. The designation SL derives from the German Sport-Leicht. 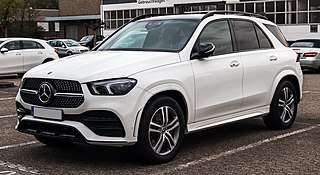 The Mercedes-Benz GLE, formerly Mercedes-Benz M-Class, is a mid-size luxury SUV produced by the German manufacturer Mercedes-Benz since 1997. In terms of size, it is slotted in between the smaller GLC and the larger GLS, the latter with which it shares platforms.

The Mercedes-Benz CL-Class is a line of grand tourers which was produced by German automaker Mercedes-Benz, produced from 1992 to 2014. The name CL stands for the German Coupé Leicht (Coupé-Light) or Coupé Luxusklasse (Coupé-Luxury). It is considered by Mercedes as their premier model.

The Mercedes-Benz CLK-Class is a former series of mid-size or entry-level luxury coupés and convertibles produced by Mercedes-Benz between 1997 and 2010. Although its design and styling was derived from the E-Class, the mechanical underpinnings were based on the smaller C-Class, and was positioned between the Mercedes-Benz SLK-Class and CL-Class. It primarily competes with the two-door BMW 3 and 6 Series, as well as the Audi A4 Cabriolet and the Maserati Coupe and its convertible variant.

The Mercedes-Benz A-Class is a subcompact car produced by the German automobile manufacturer Mercedes-Benz as the brand's entry-level vehicle. The first generation was introduced in 1997, the second generation (W169) in late 2004 and the third generation (W176) in 2012. The fourth generation model (W177), which was launched in 2018, marked the first time the A-Class was offered in the United States and Canada. This fourth generation A-Class is also the first to be offered both as a hatchback (W177) and sedan (V177).

The Mercedes-Benz W114 and W115 were the internal designation Mercedes-Benz used for a generation of front-engine, rear-drive, five-passenger sedans and coupés introduced in 1968, with three-box styling by Paul Bracq — succeeding the W110 models introduced in 1961; and manufactured until model year 1976, when the W123 was released.

The Mercedes-Benz W123 is a range of executive cars produced by German manufacturer Mercedes-Benz from November 1975 to January 1986. The W123 models surpassed their predecessor, the Mercedes-Benz W114, as the most successful Mercedes, selling 2.7 million units before production ended in the autumn of 1985 for the saloon/sedan versions and January 1986 for coupés and estates/station wagons.

The Mercedes-Benz W126 is the company's internal designation for its second generation S-Class, manufactured in sedan/saloon (1979–1991) and coupé (1981–1990) models, succeeding the company's W116 range. Mercedes introduced the 2-door C126 coupé model, marketed as the SEC, in September 1981. This generation was the first S-Class to have separate chassis codes for standard and long wheelbases and for coupé (C126).

The Mercedes-Benz W108 and W109 are luxury cars produced by Mercedes-Benz from 1965 through to 1972. The line was an upgrade of the Mercedes-Benz W114/W115, to succeed the W111 and W112 fintail sedans. The cars were successful in West Germany and in export markets including North America and Southeast Asia. During the seven-year run, a total of 383,361 units were manufactured.

The Mercedes-Benz W116 is a series of flagship luxury sedans produced from September 1972 until 1980. The W116 automobiles were the first Mercedes-Benz models to be officially called S-Class, although earlier sedan models had already unofficially been designated with the letter 'S' – for Sonderklasse or "special class." The W116 was selected European Car of the Year in 1974.

The Mercedes-Benz W140 is a series of flagship vehicles manufactured by Mercedes-Benz from 1991 to 1998 in sedan/saloon and coupe body styles and two wheelbase lengths. Mercedes-Benz unveiled the W140 S-Class at Geneva Motor Show in March 1991 with sales launch in April 1991 and North American launch on 6 August 1991.

The Mercedes-Benz W189 model 300 was a four-door luxury tourer produced by Mercedes-Benz between 1957 and 1962. It was the company's flagship model at the time, equivalent to the modern S-Class and Maybach.

The Mercedes-Benz W112 is a luxury automobile produced by Mercedes-Benz from 1961 to 1967. Marketed as the 300SE, it was available as a coupé, convertible, sedan, and stretched sedan (Lang), all generally similar in appearance to the corresponding Mercedes-Benz W111.

The Mercedes-Benz W186 Model 300 was a four-door luxury sedan produced by Mercedes-Benz between 1951 and 1957. It was the company's flagship model at the time, succeeding the World War II era W150. Three versions were produced in succession, known informally as the 300a, 300b, and 300c. An enlarged "300d" variant built on the W189 chassis succeeded it in late 1957.

None noted at this time.