A liftback is a vehicle with a sloping roofline between 45 to 5 degrees and a tailgate hinged at the roof that is lifted to open. [1]

In 1973, Toyota innovated the and mass marketed Liftback to describe the Celica fastback Liftback, and used the name Liftback GT for the North American market. [2] [3] [1]

The Liftback Designination applies to any vehicle produced where the entire rear sloped window is 45 to 1 degree angle versus the hatchback design of 90 to 46 degree slope on the tailgate or rear door, The Lifeback design concept is a combination of hatchback versatility and the sleek sports/ Fastback car with a sloping roofline.Liftbacks offer more boot space over the hatchback and sedan but not the wagon/estate variant of the same model if car but a new label for the type of vehicle already seen with. 1971 Chevrolet Vega 2003 XD Hyundai Elantra

Other car manufacturers have tried to rename their vehicles in the Hope's to try and sell more vehicles but they all fall under the Liftback categorys Audi and BMW inventing euphemisms to describe their Liftback vehicles, the Sportback (Audi) and Gran Turismo/Gran Coupe (BMW). The Tesla Model S is a 5 door fastback Liftback, but the manufacturer refers to it as a sedan even thoughit is quite clearly Liftback.

The term "fastback" is not interchangeable with "liftback". A liftback is defined as having a tailgate that is hinged from the roof, similarly to a hatchback, whereas a fastback is a broad styling term used to describe any car with an uninterrupted slope in the roofline from the roof to the rear bumper. Some fastbacks have a tailgate hinged below a fixed rear window, which is not characteristic of a litback. [4] [5] [6]

Some feel the slope of the rear window is a key determinant in the term Liftback, in which the rear cargo door, or hatch, is horizontally angled. As a result, the hatch is lifted more upwards than backwards to open, a lifting action. [7]

Opel Vectra C as a 4-door sedan (top) and a 5-door liftback (bottom). The length of the rear overhang is the same, and so are other dimensions of the car.

Fastback hatchbacks called Liftback were the mainstay of manufacturers' D-segment offerings in Europe in the 1990s to late 2000s, having become popular in the 1980s. [ citation needed ] It was common for manufacturers to offer the same D-segment model in three different body styles: a 4-door sedan, a 5-door hatchback, and a 5-door station wagon. Such models included the Ford Mondeo, the Mazda 626 and 6, the Nissan Primera, the Opel Vectra and Insignia, and the Toyota Carina and Avensis. There were also models in this market segment available only as a 5-door hatchback or a 4-door sedan, and models available only as a 5-door liftback or a 5-door station wagon. Often, the liftback and the sedan shared the same wheelbase and the same overall length, and the full rear overhang length of a conventional sedan trunk was retained on the five-door liftback version of the car.

The term was used for marketing purposes, among others, by Toyota, for example, to distinguish between two 5-door versions of the Corolla E90 sold in Europe, one of which was a conventional 5-door hatchback with a nearly vertical rear hatch while the other one was a 5-door liftback.

Audi, BMW and Mercedes-Benz were not part of this trend in the 1990s, as they did not offer their D-segment and executive cars as 5-door Liftbacks back then. However, starting around the year 2009, Audi and BMW started to sell Liftbacks, but invented new euphemisms, referring to them as Sportback (Audi) or Gran Turismo/Gran Coupe (BMW). This occurred not long after some other manufacturers started to retire D-segment Liftbacks from their European lineup.[ citation needed ]

The second-generation Skoda Superb, produced from 2008-2015, is a car that functions both as a hatchback and a sedan. It features a "Twindoor" trunk lid that can be opened using hinges located below the rear glass, or together with the rear glass using hinges at the roof. [8]

In the USA, 5-door hatchbacks are much less popular but growing in popularity.[ citation needed ][ when? ] 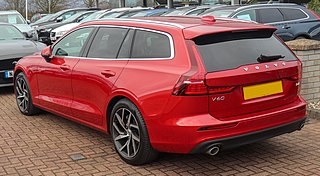 A fastback is an automotive styling feature which is defined by the rear of the car having a single slope from the roof to the rear bumper and depending on how the feature is incorporated into the individual styling is very similar to kammback styling. 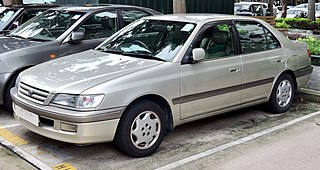 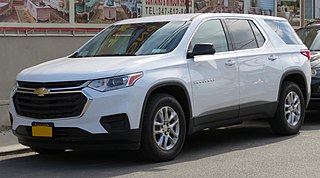 A crossover, crossover SUV, soft roader, or crossover utility vehicle (CUV) is a type of sport utility vehicle-like vehicle of unibody construction. Crossovers are often based on a platform shared with a passenger car, as opposed to a platform shared with a pickup truck. Compared to truck-based SUVs, they typically have better interior comfort, a more comfortable ride, superior fuel economy, and less expensive to manufacture, but provides less off-road capability. Forerunners of the modern crossover include the 1977 Matra Rancho and the AMC Eagle introduced in 1979.

The Toyota Sprinter is a compact car manufactured by Toyota as a variant of the Toyota Corolla. Exclusively sold in the Japanese domestic market, the Sprinter was aimed to be sportier than its Corolla sibling, with the Sprinter being sold at the Toyota Auto Store while the Corolla was sold at the eponymous Toyota Corolla Store, which focused on economical cars compared to the more upmarket Vista store. 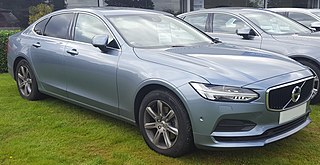 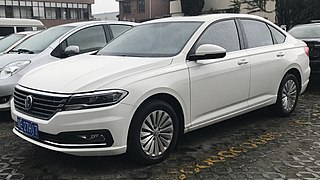 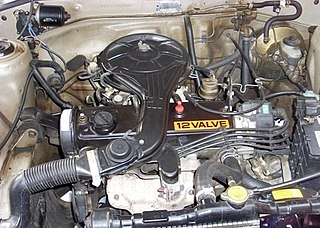 The Corolla E90, introduced in 1987 for the 1988 model year, was the sixth generation of cars sold by Toyota under the Corolla nameplate. It was the last generation of Corolla to be classified as a subcompact car and the first to be exclusively front-wheel drive or all-wheel drive; the performance option of rear-wheel drive was dropped. 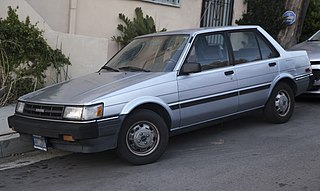 The Toyota Carina ED is a compact car manufactured by Japanese automaker Toyota in 1985 as a companion to the 1984 Carina sedan. It was positioned as the four-door Celica, with a similar focus on luxury found on larger Toyota hardtop sedans, like the Toyota Crown and the Toyota Cresta. It was the counterpart of the Corona EXiV. Its design sought to emulate the hardtop four-door coupé styling of large American and European sedans, resulting in a small, low cabin with longer front and rear ends. The ED's B-pillar stood up in the middle with no purpose other than to hinge the rear door on; it was not attached to the roof side of the cabin. The ED achieved huge sales in Japan, and other Japanese manufacturers introduced the Mazda Persona, Nissan Presea, and Mitsubishi Emeraude around the same time. "ED" is the initials of "Exciting" and "Dressy". When the Carina ED was discontinued, the Toyota Brevis appeared for the market segment served by the Carina ED. 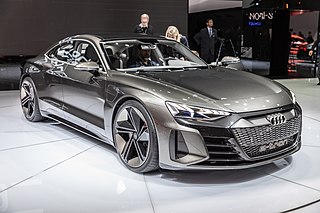 The Audi e-tron GT is an all-electric car produced by the German automobile manufacturer Audi.