Miles per hour (mph, MPH or mi/h) is a British imperial and United States customary unit of speed expressing the number of statute miles covered in one hour. It is used in the United Kingdom, the United States, and a number of smaller countries, most of which are UK or US territories, or have close historical ties with the UK or US.

Speed limits and road traffic speeds are given in miles per hour in the following jurisdictions:

Miles per hour is the unit also used in the Canadian rail system. [32]

Nautical and aeronautical applications favour the knot as a common unit of speed. (One knot is one nautical mile per hour, with a nautical mile being exactly 1,852 metres or about 6,076 feet.)

In some countries mph may be used to express the speed of delivery of a ball in sporting events such as cricket, tennis and baseball. 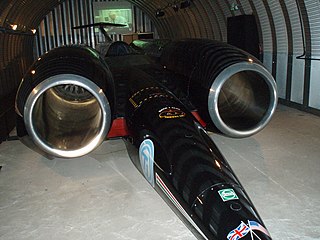 The land speed record is the highest speed achieved by a person using a vehicle on land. There is no single body for validation and regulation; in practice the Category C flying start regulations are used, officiated by regional or national organizations under the auspices of the Fédération Internationale de l'Automobile. The land speed record (LSR) is standardized as the speed over a course of fixed length, averaged over two runs. Two runs are required in opposite directions within one hour, and a new record mark must exceed the previous one by at least one percent to be validated. 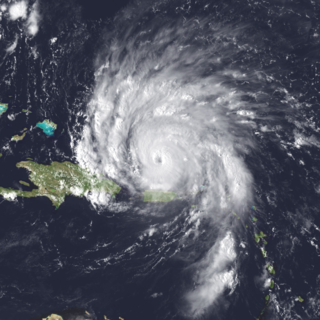 Hurricane Marilyn was the most powerful hurricane to strike the Virgin Islands since Hurricane Hugo of 1989, and the third such tropical cyclone in roughly a two-week time span to strike or impact the Leeward Islands, the others being Hurricane Iris and the much more powerful and destructive Hurricane Luis. The thirteenth named storm, seventh hurricane and third major hurricane of the extremely active 1995 Atlantic hurricane season, Marilyn formed on September 12 as a tropical depression from a tropical wave that moved off the coast of Africa on September 7. After formation, the storm quickly became a tropical storm, and steadily intensified into a hurricane by the time it struck the Lesser Antilles on September 14 at Category 1 strength. Entering the northeastern Caribbean Sea, rapid intensification ensued and it peaked on September 16 north of Puerto Rico as a Category 3 hurricane shortly after it had impacted the U.S. Virgin Islands. A Hurricane Hunter reconnaissance flight reported hail, which is unusual for tropical cyclones. After heading north past Bermuda, Marilyn weakened and became extratropical on September 22. The remnant circulation wandered the Atlantic Ocean from September 23 – October 1, just south of Nova Scotia. 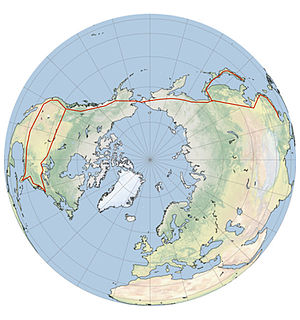 A Bering Strait crossing is a hypothetical bridge or tunnel spanning the relatively narrow and shallow Bering Strait between the Chukotka Peninsula in Russia and the Seward Peninsula in the U.S. state of Alaska. The crossing would provide a connection linking North America and Eurasia.

The Boeing Insitu ScanEagle is a small, long-endurance, low-altitude unmanned aerial vehicle (UAV) built by Insitu, a subsidiary of Boeing, and is used for reconnaissance. The ScanEagle was designed by Insitu based on the Insitu SeaScan, a commercial UAV that was intended for fish-spotting. The ScanEagle continues to receive improvements through upgrades and changes. 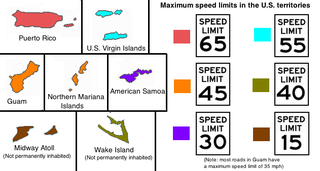 Speed limits in the United States are set by each state or territory. States have also allowed counties and municipalities to enact typically lower limits. Highway speed limits can range from an urban low of 20 mph (32 km/h) to a rural high of 85 mph (137 km/h). Speed limits are typically posted in increments of five miles per hour (8 km/h). Some states have lower limits for trucks and at night, and occasionally there are minimum speed limits. 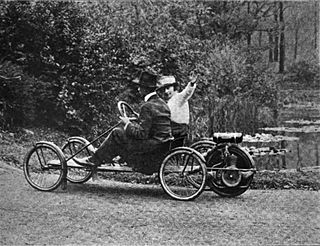 The fuel economy of an automobile relates distance traveled by a vehicle and the amount of fuel consumed. Consumption can be expressed in terms of volume of fuel to travel a distance, or the distance travelled per unit volume of fuel consumed. Since fuel consumption of vehicles is a significant factor in air pollution, and since importation of motor fuel can be a large part of a nation's foreign trade, many countries impose requirements for fuel economy. Different methods are used to approximate the actual performance of the vehicle. The energy in fuel is required to overcome various losses encountered while propelling the vehicle, and in providing power to vehicle systems such as ignition or air conditioning. Various strategies can be employed to reduce losses at each of the conversions between the chemical energy in the fuel and the kinetic energy of the vehicle. Driver behavior can affect fuel economy; maneuvers such as sudden acceleration and heavy braking waste energy.

Cyclone Olaf was the sixth cyclone to form in the Southwest Pacific Ocean during the 2004–05 South Pacific cyclone season. Olaf was also one of three simultaneous cyclones to form during the 2004–05 season, forming 21 hours after Cyclone Nancy formed to the east. A powerful Category 5 cyclone, Olaf stuck American Samoa causing heavy damage although exact estimates are unknown. Despite the damage, there were no reported deaths or injuries from the cyclone. Olaf was third South Pacific cyclone to hit the Cook Islands during the 2004–05 season, and Cyclone Percy would later affect the already devastated archipelago less than 2 weeks later. 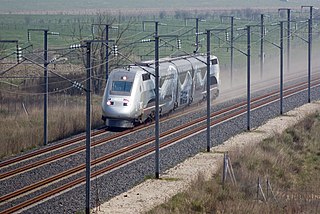 Operation V150, where 150 refers to a target speed in metres per second, was a series of high-speed trials carried out on the LGV Est. The V150 was a specially configured TGV high-speed train notable for breaking the world railway speed record on 3 April 2007. The train was built in France and reached a speed of 574.8 kilometres per hour (357.2 mph) on an unopened section of the LGV Est between Strasbourg and Paris, in France topping the previous record of 515.3 kilometres per hour (320.2 mph) set in 1990.

Canadian speed limits are set by different levels of government, depending on the jurisdiction under which the road falls, resulting in differences from province to province. The limits have been posted in kilometres per hour (km/h) since September 1, 1977. Before then, when Canada used Imperial units, speed limits were in miles per hour (mph). 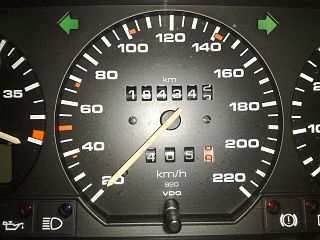 This is a list of the fastest animals in the world, by types of animal.

The AeroVironment RQ-20 Puma is a small, battery powered, American hand-launched unmanned aircraft system produced by AeroVironment based in California. Primary mission is surveillance and intelligence gathering using an electro-optical and infrared camera. 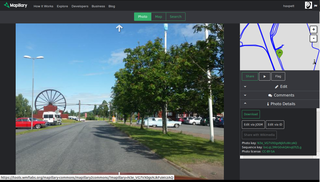 Mapillary is a service for sharing crowdsourced geotagged photos, developed by remote company Mapillary AB, based in Malmö, Sweden.

This is a comparison of road signs in countries that speak majorly English, including major ones where it is an official language and widely understood. 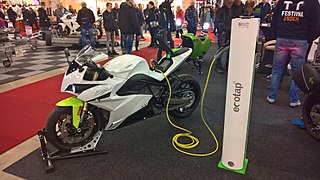 The Energica Ego is an electrically propelled sport road motorcycle designed and marketed by Energica Motor Company. It is claimed by Energica to be the world's first street-legal electric Italian sport motorcycle. The prototype was finished in 2013 and the vehicle came into the market in 2015. The prototype made use of new technologies such as CNC and 3D-printing, including the dashboard and headlights which were 3D-printed.