Open-air preaching, street preaching, or public preaching is the act of evangelizing a religious faith in public places. It is an ancient method of proselytizing a religious or social message and has been used by many cultures and religious traditions, but today it is usually associated with evangelical Protestant Christianity. Supporters of this approach note that both Jesus [1] and many of the Old Testament prophets often preached about God in public places. [2] It is one of the oldest approaches to evangelism. [1]

One of the earliest open-air preachers of Christianity, according to the gospels, was Jesus Christ, whose first specifically recorded sermon was the Sermon on the Mount, [1] [2] which took place on a mountainside in the open air. [3] In the Gospel of Luke ( Luke 6:17–49 ), it was recorded that Jesus also gave an open-air sermon known as the Sermon on the Plain. [2] In Mark 16:15, street preaching is seen as a commandment from Jesus as a way to warn people about sins and their consequences. This is supported by Isaiah 58:1 and Jeremiah 2:2. [4] [5]

After Jesus' death, many of his apostles and followers started street preaching the gospel in the Temple of Jerusalem and in other open spaces. [1] [2]

The Christian Apologetics and Research Ministry lists the "many examples of street preaching in the Bible" as including Noah, Solomon, Ezra, Jeremiah, Jonah, John the Baptist, Jesus Christ, Peter, Paul, Phillip and Apollos. [6]

During the Protestant Reformation, open-air preaching was often employed by Protestants throughout Europe [7] who could not always preach inside churches, which were mostly Catholic. [8] Open-air preaching in Europe continued during the rise of Puritanism and other Protestant movements. [2] It was often used in Pastoral environments as well as in cities, the former sometimes due to a desire to avoid the authorities, [9] and the latter because, for one reason, it could reach eccentric people living in cities who would not otherwise hear the gospel. [10]

Early Methodist preachers John Wesley and George Whitefield preached in the open air, which allowed them to attract crowds larger than most buildings could accommodate. [12] On one occasion when Wesley was forbidden to preach inside the church in his hometown, Epworth, he used his father's tombstone in the churchyard as a pulpit. [13] Whitefield stated: "I believe I never was more acceptable to my Master than when I was standing to teach those hearers in the open fields ... I now preach to ten times more people than I should, if had been confined to the churches."[ verify ]

Open-air preachers throughout history have often noted that preaching to large crowds often causes preachers to be abused in certain ways, even having objects thrown at them such as rotting vegetables or unsanitary liquids of many varieties. [14] It was said that one of the regular practices of America evangelist Dwight L. Moody in the late 1860s "was to exhort the passersby in the evenings from the steps of the court house. Often these impromptu gathering drew as many hecklers as supporters." [15]

In the late 19th century and early-to-mid 20th century many famous open-air preachers in the United States began to preach, such as Billy Graham and Billy Sunday. [16] Graham in particular used a combination of open-air preaching and the recent advent of televangelism to broadcast his sermons, which often took place in large venues such as stadiums, to large portions of the world and millions of Americans. [17]

Charles Spurgeon, the famous open-air Baptist preacher of England, believed that open-air preaching was instrumental in getting people to hear the gospel who might otherwise never hear it, [2] [18] and today, open-air preachers such as Ray Comfort believe that it reaches many more people at once than other approaches to evangelism do. [19] Charles Spurgeon recommends several things for open-air preachers, such as never trying to speak into the wind, trying to speak away from the wind so one's voice will carry farther, (sometimes up to half a mile by Spurgeon's account) keeping sermons concise instead of overly verbose and complicated, use illustrations and anecdotes to keep the crowd interested, and to not speak at the very top of your voice so you don't wear yourself out too quickly. [2] Spurgeon also recommended to never use tents when preaching due to their muffling effects, [20] and to be careful of what is on the other side of walls you may be preaching in front of, since people behind the wall or living in spaces in buildings could harass preachers. [21]

Charles Haddon Spurgeon was an English Particular Baptist preacher. Spurgeon remains highly influential among Christians of various denominations, among whom he is known as the "Prince of Preachers". He was a strong figure in the Reformed Baptist tradition, defending the 1689 London Baptist Confession of Faith, and opposing the liberal and pragmatic theological tendencies in the Church of his day.

In Christianity, evangelism is the act of preaching the gospel with the intention of sharing the message and teachings of Jesus Christ. 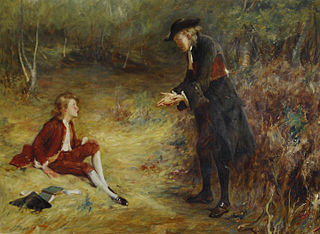 A sermon is an oration or lecture by a preacher. Sermons address a scriptural, theological, or moral topic, usually expounding on a type of belief, law, or behavior within both past and present contexts. Elements of the sermon often include exposition, exhortation, and practical application. The act of delivering a sermon is called preaching. In secular usage, the word sermon may refer, often disparagingly, to a lecture on morals.

The phrase "What would Jesus do?", often abbreviated to WWJD, became popular particularly in the United States in the late 1800s after the widely read book by Charles Sheldon entitled, “In His Steps: What Would Jesus Do.” The phrase had a resurgence in the US and elsewhere in the 1990s and as a personal motto for adherents of Christianity who used the phrase as a reminder of their belief in a moral imperative to act in a manner that would demonstrate the love of Jesus through the actions of the adherents.

William Franklin Graham Jr. was an American evangelist, a prominent evangelical Christian figure, and an ordained Southern Baptist minister who became well known internationally in the late 1940s. One of his biographers has placed him "among the most influential Christian leaders" of the 20th century. 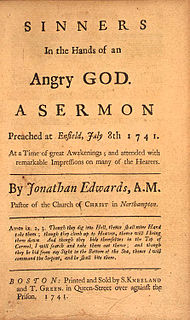 In Christianity, the gospel, or the Good News, is the news of the imminent coming of the Kingdom of God.

An altar call is a tradition in some Christian churches in which those who wish to make a new spiritual commitment to Jesus Christ are invited to come forward publicly. It is so named because the supplicants gather at the altar located at the front of the church building. Most altar calls occur at the end of an evangelical address.

The Wordless Book is a Christian evangelistic book. Evidence points to it being invented by the famous London Baptist preacher Charles Haddon Spurgeon, in a message given on January 11, 1866 to several hundred orphans regarding Psalm 51:7 "Wash me, and I shall be whiter than snow." It is called a "book", as it is usually represented with pages, although it can be shown on a single page or banner.

Oswald Jeffrey Smith was a Canadian pastor, author, and missions advocate. He founded The Peoples Church in Toronto in 1928. 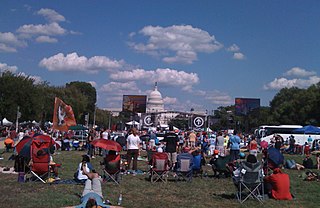 In the United States, evangelicalism is a set of spiritual principles practiced by Protestant Christians who believe in the necessity of being born again, emphasize the importance of evangelism, and affirm traditional Protestant teachings on the authority as well as the historicity of the Bible. Comprising nearly a quarter of the US population, evangelicals are diverse group drawn from a variety of denominational backgrounds, including Baptist, Mennonite, Methodist, Holiness, Pentecostal, Reformed and nondenominational churches.

Pentecostalism is a renewal movement within Protestant Christianity that places special emphasis on a direct personal experience of God through the baptism with the Holy Spirit. For Christians, this event commemorates the descent of the Holy Spirit upon the followers of Jesus Christ, as described in the second chapter of the Book of Acts. Pentecostalism was established in Kerala at the start of the 20th century.