Fuller Theological Seminary is an ecumenical seminary [1] in Pasadena, California, with regional campuses in the western United States. It is egalitarian in nature. [2]

Fuller consistently has a student body that comprises over 4,000 students from 90 countries and 110 denominations. There are over 41,000 alumni [3] Fuller is broadly evangelical among faculty and student body. Some hold conservative evangelical views such as unlimited inerrancy while others hold liberal evangelical sentiments such as limited inerrancy which views the Bible as true on matters of salvation but contains error in its recording of history and science. [4]

Fuller Theological Seminary was founded in 1947 by Charles E. Fuller, a radio evangelist known for his Old Fashioned Revival Hour show, and Harold Ockenga, the pastor of Park Street Church in Boston. [5] The seminary's founders sought to reform fundamentalism's separatist and sometimes anti-intellectual stance during the 1920s–1940s. [6] Fuller envisaged that the seminary would become "a Caltech of the evangelical world." [6]

The earliest faculty held theologically and socially conservative views, though professors with liberal perspectives arrived in the 1960s and 1970s. [6] There were tensions in the late 1950s and early 1960s as some faculty members became uncomfortable with staff and students who did not agree with Biblical inerrancy. [6] This led to people associated with the seminary playing a role in the rise of neo-evangelicalism and progressive theology. [6] [7]

David Hubbard recruited Donald McGavran to be the first dean of the newly created school of world mission in 1965. [8] McGavran was esteemed as perhaps the world’s most prominent and influential missiologist of the 20th century. [9] McGavran recruited some of the greatest missiologist of the 20th century to serve as faculty of the school of world mission at Fuller Theological Seminary. This included Alan Tippett, Ralph Winter, C. Peter Wagner and many others. [10] These faculty would shape world missions for the ensuing decades. Fuller’s School of World Mission became the largest missions training institution in the world. [11] The school of world mission also has the largest amount of missions faculty of any institution in the world as well as graduating the most missions students of any seminary. [12]

Fuller has had five presidents over its over 70-year history. The founding president, Harold Ockenga, remained in Boston and served as president in absentia from 1947 to 1954. He described his role to Charles Fuller as recruiting faculty and setting the curriculum, which did not require his active presence in Pasadena. [15] His successor and protege Edward John Carnell, a Baptist theologian and apologist, took over the post in 1954 but resigned in 1959 under failing health. [15] Ockenga resumed his in absentia leadership until 35-year-old David Allen Hubbard, a Baptist Old Testament scholar and member of Fuller's third entering class, became Fuller's third president in 1963. [16] Hubbard served for 30 years and led the seminary through both substantial growth and significant controversy.

Hubbard was succeeded by Reformed philosopher and theologian Richard Mouw, who served as president of Fuller from 1993 to 2013. In 2006, a Los Angeles Times article labeled him as "one of the nation's leading evangelicals". [17] In July 2013, Mark Labberton became the Clifford L. Penner Presidential Chair of Fuller. Labberton, a Presbyterian (USA) pastor, had previously served Fuller as director of the Lloyd John Ogilvie Institute of Preaching since 2009. He retains his position as Lloyd John Ogilvie Associate Professor of Preaching alongside the presidency. [18] Mouw remained at Fuller as Professor of Faith and Public Life until 2020. [19] [20] In October 2021, Labberton announced his retirement. [21] [22]

Fuller has announced that David Goatley will become the next president. [23] He is the first African American to occupy the role. David is a missions executive and former administrative executive at Duke University. [24]

Fuller is accredited by the Association of Theological Schools in the United States and Canada and the Western Association of Schools and Colleges. Fuller's student body of 2,897 includes students from 90 countries and 110 denominational backgrounds. [14] [13]

Fuller Theological Seminary is organized into schools of theology, psychology, and intercultural studies. The seminary emphasizes integration between the three schools and many students take courses in more than one school. The seminary offers 18 degree programs, including seven master's degrees and 11 advanced degrees. [25]

On May 23, 2018, Fuller announced that its main campus in Pasadena would be sold and the seminary would move its main campus to Pomona by 2021. [28] In October 2019 the board of directors voted to cancel the move and remain in Pasadena, citing dramatically escalated costs of construction in Southern California and differences with the City of Pasadena, which affected the sale and sale price of the seminary’s Pasadena campus. [29] [30]

While Fuller has established policies, the seminary is open to difference in opinion among students and faculty. [31] The seminary's current president, Mark Labberton, marched in favor of comprehensive immigration reform and a pathway to citizenship for undocumented immigrants in 2013. [32] Others have expressed support in the Fuller forum for the Black Lives Matter movement as raising awareness for civil rights. [33] In 2015, some faculty at the seminary called on Christians to openly discuss, with respect, issues related to race, gender, sexual orientation, refugees, and immigrants. [34]

Fuller annually awards the David Allan Hubbard Achievement Award to a graduating student from each of Seminary’s three schools, in recognition of outstanding work completed while at Fuller. The award was instituted in honor of David Allan Hubbard, an Old Testament scholar, and the third President of Fuller Theological Seminary. [38] Each recipient is chosen by the faculty of their respective school. [39]

Gordon–Conwell Theological Seminary (GCTS) is an evangelical seminary with its main campus in Hamilton, Massachusetts, and three other campuses in Boston, Massachusetts; Charlotte, North Carolina; and Jacksonville, Florida. According to the Association of Theological Schools, Gordon-Conwell ranks as one of the largest evangelical seminaries in North America in terms of total number of full-time students enrolled.

The Southwestern Baptist Theological Seminary is a Baptist seminary in Fort Worth, Texas. It was established in 1908 and is one of the largest seminaries in the world. It is accredited by the Association of Theological Schools in the United States and Canada, the Southern Association of Colleges and Schools Commission on Colleges, and the National Association of Schools of Music to award diplomas and bachelor's, master's, and doctoral degrees.

Richard John Mouw is an American theologian and philosopher. He held the position of President at Fuller Theological Seminary for 20 years (1993–2013), and continues to hold the post of Professor of Faith and Public Life.

Trinity Evangelical Divinity School (TEDS) is an academic divinity school founded in 1897 and located in the northern Chicago suburb of Deerfield, Illinois. It is part of and located on the main campus of Trinity International University. Trinity is regarded as being one of the world’s top institutions for theological higher education out of hundreds of divinity schools, seminaries and Bible institutes. It’s among the most conservative and largest theological educational institutions. Since the reorganization of Trinity in 1963 by Kenneth Kantzer, the school has consistently recruited and retained some of the top scholars in the world to serve as faculty.

Donald Anderson McGavran was a missiologist and founding Dean of the School of World Mission at Fuller Theological Seminary in Pasadena, California, and is known for his work related to evangelism and religious conversion. McGavran is widely regarded as the most influential missiologist of the 20th century. 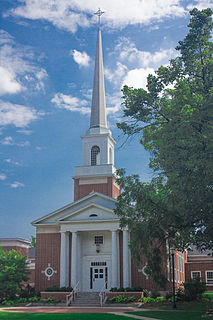 Western Theological Seminary (WTS) is a seminary located in Holland, Michigan. Established in 1866, it is now independent but slightly related to the Reformed Church in America, a mainline Reformed Protestant denomination in Canada and the United States.

L. Paige Patterson served as the fifth president of Southeastern Baptist Theological Seminary in Wake Forest, N.C., from 1992 to 2003, as president of the Southern Baptist Convention (SBC) from 1998 to 2000, and as the eighth president of the Southwestern Baptist Theological Seminary in Fort Worth, Texas, from 2003 until his firing in 2018. He played a major role in the Southern Baptist "conservative resurgence", called "Fundamentalist Takeover" by opponents. He has been alternately described as a fundamentalist and a conservative evangelical.

The Venture Center was a collaborative Christian mission base located on a 15-acre campus in Pasadena, California. It has moved to a virtual "hub" approach, and sold the campus in 2019. The Venture Center sought to connect other like-minded organizations around prayer, research, innovation, media, education, strategy, and mobilization with a continued focus on unreached people groups. The U.S. Center for World Mission archives now reside at the Ralph D. Winter Research Center, which houses collections of Ralph D. Winter and Donald McGavran and other special collections. Many Christian ministries had their genesis at the center or resided for a season before moving on to new locations throughout the world.

Talbot School of Theology is an evangelical Christian theological seminary located near Los Angeles. Talbot is one of the nine schools that comprise Biola University, located in La Mirada, California. Talbot is nondenominational and known for its conservative theological positions, particularly its historical adherence to biblical inerrancy.

Ralph Dana Winter was an American missiologist and Presbyterian missionary who helped pioneer Theological Education by Extension, raised the debate about the role of the church and mission structures and became well known as the advocate for pioneer outreach among unreached people groups. He was the founder of the U.S. Center for World Mission, William Carey International University, and the International Society for Frontier Missiology. 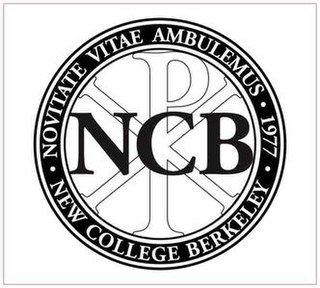 New College Berkeley is an Gospel-centered, ecumenical graduate school of Christian studies and spiritual formation. It is located near the campus of the University of California, Berkeley and is affiliated with the nearby Graduate Theological Union. The purpose of New College Berkeley is to provide resources to bring God's presence into the public world of work, politics, civic life and academia, as well as the private spaces of discipleship, family and friendship. All of the approximately 200 students each year are enrolled part-time in various courses, seminars and conferences.

Alan Richard Tippett was a Methodist missionary, missiologist, and anthropologist.

Mark Labberton is the Clifford L. Penner Presidential Chair at Fuller Theological Seminary. Before he became Fuller's president, he served for 16 years as senior pastor of the First Presbyterian Church of Berkeley, California.

David Allan Hubbard (April 8, 1928–June 7, 1996) was the 3rd President of Fuller Theological Seminary and an Old Testament scholar. Under his leadership, Fuller became the world's largest multidenominational seminary and an important center for mainstream evangelical thought.