Ranunculus acris is a herbaceous perennial plant that grows to a height of 30 to 70 cm, with ungrooved flowing stems bearing glossy yellow flowers about 25 mm across. There are five overlapping petals borne above five green sepals that soon turn yellow as the flower matures. It has numerous stamens inserted below the ovary. The leaves are compound, with three-lobed leaflets. Unlike Ranunculus repens , the terminal leaflet is sessile. As with other members of the genus, the numerous seeds are borne as achenes.

The rare autumn buttercup (R. aestivalis) is sometimes treated as a variety of this species. [3]

The juice of the plant is semi-poisonous to livestock, causing blistering. [4]

The plant is native to Eurasia, but has been introduced across much of the world so that it now has a circumpolar distribution. [5] It is a naturalized species and often a weed in parts of North America, [6] but it is probably native in Alaska and Greenland. [7] In New Zealand it is a serious pasture weed costing the dairy industry hundreds of millions of dollars. [8] It has become one of the few pasture weeds that has developed a resistance to herbicides. [9]

In horticulture the species may be regarded as a troublesome weed, colonising lawns and paths. However, it may be a welcome feature of wildflower meadows. The double-flowered cultivar R. acris 'Flore Pleno' has gained the Royal Horticultural Society's Award of Garden Merit. [10] [11]

Oils in the plant, probably present in the leaves and stems, can cause abdominal pains if consumed. When eaten by animals, the buttercups have caused diarrhea and blindness. [12]

The Cherokee use it as a poultice for abscesses, use an infusion for oral thrush, and use the juice as a sedative. [17] They also cook the leaves and eat them as greens. [17]

Ficaria verna, commonly known as lesser celandine or pilewort, is a low-growing, hairless perennial flowering plant in the buttercup family Ranunculaceae native to Europe and west Asia. It has fleshy dark green, heart-shaped leaves and distinctive flowers with bright yellow, glossy petals. It is now introduced in North America, where it is known by the common name fig buttercup and considered an invasive species. The plant is poisonous if ingested raw and potentially fatal to grazing animals and livestock such as horses, cattle, and sheep. For these reasons, several US states have banned the plant or listed it as a noxious weed. It prefers bare, damp ground and is considered by horticulturalists in the United Kingdom as a persistent garden weed; nevertheless, many specialist plantsmen, nursery owners and discerning gardeners in the UK and Europe collect selected cultivars of the plant, including bronze-leaved and double-flowered ones. Emerging in late winter with flowers appearing March through May in the UK, its appearance across the landscape is regarded by many as a harbinger of spring. 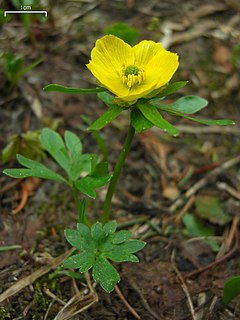 Ranunculus is a large genus of about 600 species of flowering plants in the family Ranunculaceae. Members of the genus are known as buttercups, spearworts and water crowfoots.

Abies balsamea or balsam fir is a North American fir, native to most of eastern and central Canada and the northeastern United States.

Rumex crispus, the curly dock, curled dock or yellow dock, is a perennial flowering plant in the family Polygonaceae, native to Europe and Western Asia. 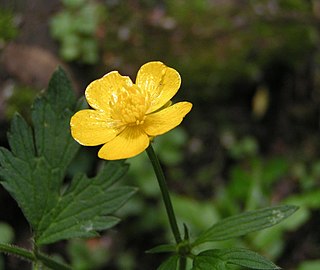 The Nuxalk Nation is the band government of the Nuxalk people of Bella Coola, British Columbia. It is a member of the Oweekeno-Kitasoo-Nuxalk Tribal Council, and until March 2008 was a member of the Unrepresented Nations and Peoples Organization. The population is 1,479.

Jeffersonia, also known as twinleaf or rheumatism root, is a small genus of herbaceous perennial plants in the family Berberidaceae. They are uncommon spring wildflowers and grow in limestone soils of rich deciduous forests. Jeffersonia was named for United States President Thomas Jefferson by his contemporary Benjamin Smith Barton. This genus was formerly grouped in genus Podophyllum. Twinleaf is protected by state laws as a threatened or endangered plant in Georgia, Iowa, New York, and New Jersey.

Senna hebecarpa, with the common names American senna and wild senna, is a species of legume native to eastern North America. 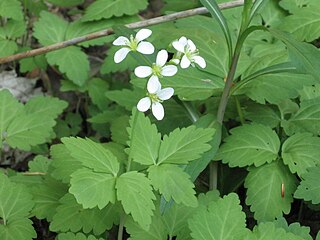 Cardamine diphylla is a plant native to North America.

Ranunculus sceleratus known by the common names celery-leaved buttercup, celery-leaf buttercup, and cursed buttercup is a species of flowering plant in the buttercup family Ranunculaceae. It has a circumpolar distribution in the northern hemisphere, native to temperate and boreal North America and Eurasia, where it grows in wet and moist habitats, including ponds and streambanks. 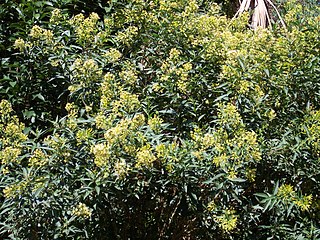 Cestrum parqui, commonly known as palqui, green cestrum or willow-leaved jessamine, is a species of flowering plant native to Chile. In Australia the plant is regarded as a noxious invasive weed and a significant hazard to livestock which may eat it inadvertently or during shortages of other foods, often resulting in death.

Ranunculus aconitifolius, the aconite-leaf buttercup or bachelor's buttons, is a species of flowering plant in the buttercup family Ranunculaceae, native to central Europe. Growing to 60 cm (24 in) high by 40 cm (16 in) broad, this herbaceous perennial has slightly hairy palmate leaves up to 20 cm (8 in) long, and loose panicles of white, saucer-shaped flowers in spring.

Ranunculus cymbalaria is a species of buttercup known by the common names alkali buttercup and seaside buttercup. It is native to much of Eurasia and parts of North and South America, where it grows in many types of habitat, especially in moist to wet areas such as marshes, bogs, and moist spring meadows. It is a perennial herb producing several stems a few centimeters to nearly 40 centimeters long. Some are prostrate against the ground and are stolons which root in moist substrate, and some are erect. The leaves are variable in shape, the basal ones with notched or slightly divided leaf blades borne on long petioles, and any upper leaves much reduced in size. The inflorescence bears one or more flowers on erect stalks. The flower has five to eight pale yellow petals, each under a centimeter long. The protruding receptacle at the center of the flower becomes a cylindrical cluster of fruits, each of which is an achene.

Ranunculus aestivalis is a rare species of buttercup known by the common names fall buttercup and autumn buttercup. It is endemic to the state of Utah in the United States, where it exists only in Garfield County next to the Sevier River. It is restricted to a moist microhabitat in an otherwise dry, open ecosystem, and the amount of available habitat is very limited. This is a federally listed endangered species of the United States. It has been described as "the most graceful and showy members of the genus in the western United States," but also "one of the state's rarest and most restricted plants." 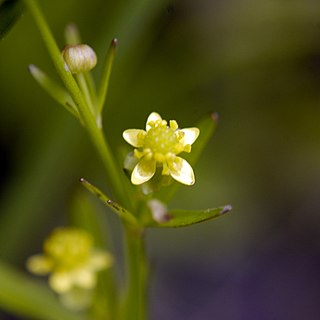 Ranunculus abortivus is a species of flowering plant in the buttercup family, Ranunculaceae. Its common names include littleleaf buttercup, small-flower crowfoot, small-flowered buttercup, and kidneyleaf buttercup. It is widespread across much of North America, found in all ten Canadian provinces as well as Yukon and the Northwest Territories, and most of the United States, except Hawaii, Oregon, California, and parts of the Southwest.

This is a list of plants documented to have been traditionally used by the Cherokee, and how they are used.

The Iroquois use a wide variety of medicinal plants, including quinine, chamomile, ipecac, and a form of penicillin.