Serine racemase (SR, EC 5.1.1.18) is the first racemase enzyme in human biology to be identified. This enzyme converts L-serine to its enantiomer form, D-serine. D-serine acts as a neuronal signaling molecule by activating NMDA receptors in the brain.

In humans, the serine racemase protein is encoded by the SRR gene. [7] Serine racemase may have evolved from L-thre-hydroxyaspartate (L-THA) eliminase and served as the precursor to aspartate racemase. [8]

Mammalian serine racemase is a pyridoxal 5'-phosphate dependent enzyme that catalyzes both the racemization of L-serine to D-serine and also the elimination of water from L-serine, generating pyruvate and ammonia through the β-elimination of L-serine. [9] This makes serine a known bifurcating enzyme. The β-elimination pathway is thought to serve as a bleed valve that allows local stores of L-serine to be diverted away from D-serine as a means of muting the D-serine signaling pathway. The canonical tetraglycine loop that serves as a PLP phosphate binding pocket includes the active residues being F55, K56, G185, G186, G187, G188, and S313. [10]

The enzyme is physiologically stimulated by divalent cations (e.g., magnesium) and is allosterically activated by the magnesium/ATP complex, associated with a conformational change upon nucleotide binding that depends upon interactions with Q89. The canonical coordination sphere of the divalent cation interaction site includes the active residues E210 and D216 within 2.1 angstroms of the ion. [11]

Serine is an α-amino acid that is used in the biosynthesis of proteins. It contains an α-amino group, a carboxyl group, and a side chain consisting of a hydroxymethyl group, classifying it as a polar amino acid. It can be synthesized in the human body under normal physiological circumstances, making it a nonessential amino acid. It is encoded by the codons UCU, UCC, UCA, UCG, AGU and AGC.

Catechol-O-methyltransferase is one of several enzymes that degrade catecholamines, catecholestrogens, and various drugs and substances having a catechol structure. In humans, catechol-O-methyltransferase protein is encoded by the COMT gene. Two isoforms of COMT are produced: the soluble short form (S-COMT) and the membrane bound long form (MB-COMT). As the regulation of catecholamines is impaired in a number of medical conditions, several pharmaceutical drugs target COMT to alter its activity and therefore the availability of catecholamines. COMT was first discovered by the biochemist Julius Axelrod in 1957.

Protein tyrosine phosphatases are a group of enzymes that remove phosphate groups from phosphorylated tyrosine residues on proteins. Protein tyrosine (pTyr) phosphorylation is a common post-translational modification that can create novel recognition motifs for protein interactions and cellular localization, affect protein stability, and regulate enzyme activity. As a consequence, maintaining an appropriate level of protein tyrosine phosphorylation is essential for many cellular functions. Tyrosine-specific protein phosphatases catalyse the removal of a phosphate group attached to a tyrosine residue, using a cysteinyl-phosphate enzyme intermediate. These enzymes are key regulatory components in signal transduction pathways and cell cycle control, and are important in the control of cell growth, proliferation, differentiation, transformation, and synaptic plasticity.

Cycloserine, sold under the brand name Seromycin, is a GABA transaminase inhibitor and an antibiotic, used to treat tuberculosis. Specifically it is used, along with other antituberculosis medications, for active drug resistant tuberculosis. It is given by mouth.

Cathepsin C (CTSC) also known as dipeptidyl peptidase I (DPP-I) is a lysosomal exo-cysteine protease belonging to the peptidase C1 protein family, a subgroup of the cysteine cathepsins. In humans, it is encoded by the CTSC gene.

D-amino acid oxidase is an enzyme with the function on a molecular level to oxidize D-amino acids to the corresponding α-keto acids, producing ammonia and hydrogen peroxide. This results in a number of physiological effects in various systems, most notably the brain. The enzyme is most active toward neutral D-amino acids, and not active toward acidic D-amino acids. One of its most important targets in mammals is D-Serine in the central nervous system. By targeting this and other D-amino acids in vertebrates, DAAO is important in detoxification. The role in microorganisms is slightly different, breaking down D-amino acids to generate energy.

SK3 also known as KCa2.3 is a protein that in humans is encoded by the KCNN3 gene. 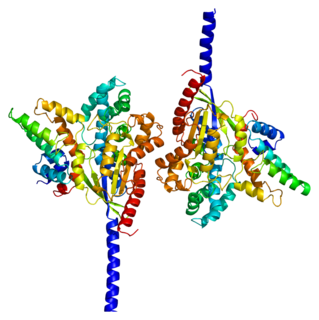 The Cholecystokinin A receptor is a human protein, also known as CCKAR or CCK1, with CCK1 now being the IUPHAR-recommended name.

Alpha-methylacyl-CoA racemase (AMACR) is an enzyme that in humans is encoded by the AMACR gene. AMACR catalyzes the following chemical reaction:

In enzymology, an aspartate racemase is an enzyme that catalyzes the following chemical reaction: 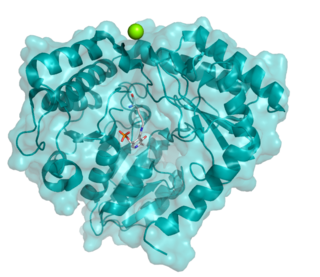 In enzymology, a serine C-palmitoyltransferase (EC 2.3.1.50) is an enzyme that catalyzes the chemical reaction:

Serine palmitoyltransferase, long chain base subunit 2, also known as SPTLC2, is a protein which in humans is encoded by the SPTLC2 gene.

In molecular biology, DAOA-AS1, DAOA antisense RNA 1, , is a human gene encoding a long non-coding RNA. It was originally identified in a screen for genes associated with schizophrenia. It is also associated with bipolar disorder and other psychiatric phenotypes. It may regulate the expression of the DAOA gene.

Serine/threonine-protein phosphatase 2B catalytic subunit gamma isoform (PP2BC) is an enzyme that in humans is encoded by the PPP3CC gene.

The glutamate hypothesis of schizophrenia models the subset of pathologic mechanisms of schizophrenia linked to glutamatergic signaling. The hypothesis was initially based on a set of clinical, neuropathological, and, later, genetic findings pointing at a hypofunction of glutamatergic signaling via NMDA receptors. While thought to be more proximal to the root causes of schizophrenia, it does not negate the dopamine hypothesis, and the two may be ultimately brought together by circuit-based models. The development of the hypothesis allowed for the integration of the GABAergic and oscillatory abnormalities into the converging disease model and made it possible to discover the causes of some disruptions.

U2AF homology motif (UHM) kinase 1, also known as UHMK1, is a protein which in humans is encoded by the UHMK1 gene.

Multiple EGF-like-domains 10 is a protein that in humans is encoded by the MEGF10 gene.