Additionally, human and some bacterial GALE isoforms reversibly catalyze the formation of UDP-N-acetylgalactosamine (UDP-GalNAc) from UDP-N-acetylglucosamine (UDP-GlcNAc) in the presence of NAD+, an initial step in glycoprotein or glycolipid synthesis. [3]

Dr. Luis Leloir deduced the role of GALE in galactose metabolism during his tenure at the Instituto de Investigaciones Bioquímicas del Fundación Campomar, initially terming the enzyme waldenase. [4] Dr. Leloir was awarded the 1970 Nobel Prize in Chemistry for his discovery of sugar nucleotides and their role in the biosynthesis of carbohydrates. [5]

GALE belongs to the short-chain dehydrogenase/reductase (SDR) superfamily of proteins. [6] This family is characterized by a conserved Tyr-X-X-X-Lys motif necessary for enzymatic activity; one or more Rossmann fold scaffolds; and the ability to bind NAD+. [6]

GALE structure has been resolved for a number of species, including E. coli [7] and humans. [8] GALE exists as a homodimer in various species. [8]

The cleft between GALE's N- and C-terminal domains constitutes the enzyme's active site. A conserved Tyr-X-X-X Lys motif is necessary for GALE catalytic activity; in humans, this motif is represented by Tyr 157-Gly-Lys-Ser-Lys 161, [6] while E. coli GALE contains Tyr 149-Gly-Lys-Ser-Lys 153. [8] The size and shape of GALE's active site varies across species, allowing for variable GALE substrate specificity. [3] Additionally, the conformation of the active site within a species-specific GALE is malleable; for instance, a bulky UDP-GlcNAc 2' N-acetyl group is accommodated within the human GALE active site by the rotation of the Asn 207 carboxamide side chain. [3]

Conversion of UDP-galactose to UDP-glucose

Conversion of UDP-GlcNAc to UDP-GalNAc

Human and some bacterial GALE isoforms reversibly catalyze the conversion of UDP-GlcNAc to UDP-GalNAc through an identical mechanism, inverting the stereochemical configuration at the sugar's 4' hydroxyl group. [3] [11]

No direct catabolic pathways exist for galactose metabolism. Galactose is therefore preferentially converted into glucose-1-phosphate, which may be shunted into glycolysis or the inositol synthesis pathway. [12]

Human GALE deficiency or dysfunction results in Type III galactosemia, which may exist in a mild (peripheral) or more severe (generalized) form. [12]

Galactose-1-phosphate uridylyltransferase is an enzyme responsible for converting ingested galactose to glucose.

Glycosyltransferases are enzymes that establish natural glycosidic linkages. They catalyze the transfer of saccharide moieties from an activated nucleotide sugar to a nucleophilic glycosyl acceptor molecule, the nucleophile of which can be oxygen- carbon-, nitrogen-, or sulfur-based. 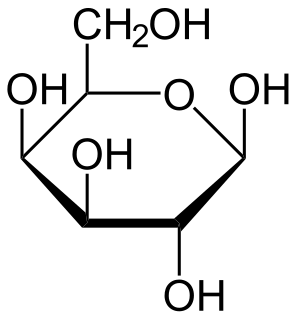 Tunicamycin is a mixture of homologous nucleoside antibiotics that inhibits the UDP-HexNAc: polyprenol-P HexNAc-1-P family of enzymes. In eukaryotes, this includes the enzyme GlcNAc phosphotransferase (GPT), which catalyzes the transfer of N-acetylglucosamine-1-phosphate from UDP-N-acetylglucosamine to dolichol phosphate in the first step of glycoprotein synthesis. Tunicamycin blocks N-linked glycosylation (N-glycans) and treatment of cultured human cells with tunicamycin causes cell cycle arrest in G1 phase. It is used as an experimental tool in biology, e.g. to induce unfolded protein response. Tunicamycin is produced by several bacteria, including Streptomyces clavuligerus and Streptomyces lysosuperificus.

In enzymology, an UDP-N-acetylglucosamine 2-epimerase is an enzyme that catalyzes the chemical reaction

In enzymology, a N-acetylgalactosamine kinase is an enzyme that catalyzes the chemical reaction

In enzymology, an UDP-glucose—hexose-1-phosphate uridylyltransferase is an enzyme that catalyzes the chemical reaction

Beta-1,4-galactosyltransferase 1 is an enzyme that in humans is encoded by the B4GALT1 gene.

Polypeptide N-acetylgalactosaminyltransferase 1 is an enzyme that in humans is encoded by the GALNT1 gene. 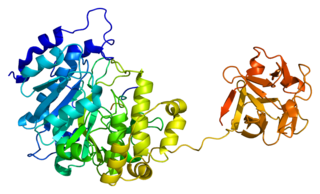 Polypeptide N-acetylgalactosaminyltransferase 2 is an enzyme that in humans is encoded by the GALNT2 gene.

Beta-1,3-galactosyltransferase 5 is an enzyme that in humans is encoded by the B3GALT5 gene.

The gal operon is a prokaryotic operon, which encodes enzymes necessary for galactose metabolism. Repression of gene expression for this operon works via binding of repressor molecules to two operators. These repressors dimerize, creating a loop in the DNA. The loop as well as hindrance from the external operator prevent RNA polymerase from binding to the promoter, and thus prevent transcription. Additionally, since the metabolism of galactose in the cell is involved in both anabolic and catabolic pathways, a novel regulatory system using two promoters for differential repression has been identified and characterized within the context of the gal operon.

Galactolysis refers to the catabolism of galactose. The Leloir pathway is a metabolic pathway for the catabolism of D-galactose. It is named after Luis Federico Leloir, who first described it.