This list contains a list of EC numbers for the third group, EC 3, hydrolases, placed in numerical order as determined by the Nomenclature Committee of the International Union of Biochemistry and Molecular Biology. All official information is tabulated at the website of the committee. [1] The database is developed and maintained by Andrew McDonald. [2]

EC 3.1.15: Exonucleases Active with either Ribo- or Deoxyribonucleic Acids and Producing 5'-Phosphomonoesters

EC 3.1.16: Exonucleases Active with either Ribo- or Deoxyribonucleic Acids and Producing 3'-Phosphomonoesters

EC 3.1.30: Endoribonucleases Active with either Ribo- or Deoxyribonucleic Acids and Producing 5'-Phosphomonoesters

EC 3.1.31: Endoribonucleases Active with either Ribo- or Deoxyribonucleic Acids and Producing 3'-Phosphomonoesters

EC 3.5: Acting on carbon-nitrogen bonds, other than peptide bonds

3.6.3: Acting on acid anhydrides to catalyse transmembrane movement of substances

3.6.4: Acting on acid anhydrides to facilitate cellular and subcellular movement

3.6.5: Acting on GTP to facilitate cellular and subcellular movement

EC 3.9.1: Acting on phosphorus-nitrogen bonds (only sub-subclass identified to date)

EC 3.10.1: Acting on sulfur-nitrogen bonds (only sub-subclass identified to date)

EC 3.11.1: Acting on carbon-phosphorus bonds (only sub-subclass identified to date)

EC 3.12.1: Acting on sulfur-sulfur bonds (only sub-subclass identified to date)

EC 3.13.1: Acting on carbon-sulfur bonds (only sub-subclass identified to date)

An amylase is an enzyme that catalyses the hydrolysis of starch into sugars. Amylase is present in the saliva of humans and some other mammals, where it begins the chemical process of digestion. Foods that contain large amounts of starch but little sugar, such as rice and potatoes, may acquire a slightly sweet taste as they are chewed because amylase degrades some of their starch into sugar. The pancreas and salivary gland make amylase to hydrolyse dietary starch into disaccharides and trisaccharides which are converted by other enzymes to glucose to supply the body with energy. Plants and some bacteria also produce amylase. Specific amylase proteins are designated by different Greek letters. All amylases are glycoside hydrolases and act on α-1,4-glycosidic bonds.

Hydrolase is a class of enzyme that commonly perform as biochemical catalysts that use water to break a chemical bond, which typically results in dividing a larger molecule into smaller molecules. Some common examples of hydrolase enzymes are esterases including lipases, phosphatases, glycosidases, peptidases, and nucleosidases.

Erepsin is a mixture of enzymes contained in a protein fraction found in the intestinal juices that digest peptones into amino acids. It is produced and secreted by the intestinal glands in the ileum and the pancreas, but it is also found widely in other cells. It is, however, a term now rarely used in scientific literature as more precise terms are preferred.

Glucose 6-phosphatase is an enzyme that hydrolyzes glucose 6-phosphate, resulting in the creation of a phosphate group and free glucose. Glucose is then exported from the cell via glucose transporter membrane proteins. This catalysis completes the final step in gluconeogenesis and therefore plays a key role in the homeostatic regulation of blood glucose levels.

Aminopeptidases are enzymes that catalyze the cleavage of amino acids from the amino terminus (N-terminus) of proteins or peptides (exopeptidases).They are widely distributed throughout the animal and plant kingdoms and are found in many subcellular organelles, in cytosol, and as membrane components. Aminopeptidases are used in essential cellular functions. Many, but not all, of these peptidases are zinc metalloenzymes.

A metalloexopeptidase is a type of enzyme that acts as a metalloproteinase exopeptidase. These enzymes have a catalytic mechanism involving a metal, often zinc. They function in molecular biology as agents that cut the terminal peptide bonds ending peptide chains. Analogous to slicing the end off a loaf of bread, the process releases a single amino acid for use.

Carboxypeptidase B is a carboxypeptidase that preferentially acts upon basic amino acids, such as arginine and lysine. This serum enzyme is also responsible for rapidly metabolizing the C5a protein into C5a des-Arg, with one less amino acid. 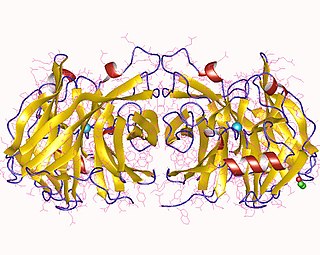 In enzymology, a nucleoside-diphosphatase (EC 3.6.1.6) is an enzyme that catalyzes the chemical reaction

Candoxatril is the orally active prodrug of candoxatrilat (UK-73967) human neutral endopeptidase (Neprilysin) as the neutral endopeptidase 24.11 complexed (RB-101) with phosphoramidon degrades and inactivates a number of bioactive peptides. Two multiply connected folding domains of the neutral endopeptidase locus splicing of exons 1, 2a, or 2b to the common exon 3 composed of 24 exons of the human CALLA/NEP gene containing the active site, it is known as peptidase family M13 the gluzincins a faint but significant structural relationship of the metzincins to the thermolysin-like enzymes, Zincin is the simplest descriptor of biological space. The structure reveals two multiply connected folding domains which embrace a large central cavity containing the active site of the 5-indanyl ester prodrug candoxatril and differs from phosphoramidon [N-(N- -L- leucyl)-L-tryptophan] in several respects the structure of human neutral endopeptidase complexed with phosphoramidon is lost due to desolvation of the enzyme and ligand on formation of the complex Candoxatril.

Meprin A is an enzyme that cleaves protein and peptide substrates preferentially on carboxyl side of hydrophobic residues. This metalloprotease can be associated with inflammatory responses. It can be found in the extracellular space where it can also form complex structures by joining its monomers together.

Cytosol nonspecific dipeptidase is an enzyme. This enzyme catalyses the following chemical reaction

Dipeptidase E is an enzyme. This enzyme catalyses the following chemical reaction

Muramoylpentapeptide carboxypeptidase is an enzyme. This enzyme catalyses the following chemical reaction.

Gamma-D-glutamyl-meso-diaminopimelate peptidase is an enzyme. This enzyme catalyses the following chemical reaction

Procollagen C-endopeptidase is an enzyme. This enzyme catalyses the following chemical reaction