Slinfold is a village and civil parish in the Horsham District of West Sussex, England.

Slinfold is the source of the western River Adur, which flows to the English Channel at Shoreham-by-Sea [4]

Alfoldean, Slinfold, West Sussex subject of a dig by archaeological television programme Time Team in 2006, [5] the site of one of a probable four mansiones on the route of Stane Street between London and Chichester. [6]

There has been a house at Dedisham, 1 mile (1.6 km) northeast of the village, since at least 1271, when Henry III granted the then occupier a licence to crenellate the manor house then on the site. [7] The present house on the site appears to date from the 16th or 17th century. [7] During the English Civil War the Parliamentarian commander Sir William Waller sacked a house on this site in 1643. [7]

Slinfold railway station on the Cranleigh Line was opened in 1865 and closed in 1965. The trackbed of the line now forms part of the Downs Link Bridleway. The route of the former Roman road linking London and Chichester passes through the parish [8] and a Roman posting station existed at Alfoldean. In 1848 it was recorded that Roman swords and brass ornaments had been found in the parish. [8]

Slinfold has a village shop and Post Office, a primary school and pre-school, a recreation ground, a village hall and one public house, the Red Lyon. [9] Where Slinfold Railway station used to be is now a Caravan Club site. [10]

The Church of England parish church of Saint Peter was designed by the Gothic Revival architect Benjamin Ferrey in a late 13th-century style and built in 1861 on the site of the original medieval parish church. [11]

It is said that there is a boggy hollow near Slinfold which contains a sunken bell. Long ago some villagers, hoping to retrieve the bell, sought the advice of a witch. She told them that it could only be retrieved by 12 white oxen, at midnight. The oxen were used, but one villager broke the witch's instructions by speaking, and the bell sank back into the bog. [13]

Parham is a civil parish in the Horsham District of West Sussex, England. There was a village of Parham, around the parish church, but its few houses were destroyed in the early 19th century to create the landscaped park and gardens. The parish now consists of Parham Park and the farms and smaller settlements around it. The village is between Wiggonholt and Cootham, about 3 miles (4.8 km) south of Pulborough on the A283 road.

Sedlescombe is a village and civil parish in the Rother district of East Sussex, England. The village is on the B2244 road, about 6 miles (10 km) north of Hastings. The parish includes the hamlet of Kent Street, which is on the A21 road.

Coombes is a hamlet and civil parish in the Adur District of West Sussex, England. The village is in the Adur Valley 2 miles (3.2 km) northwest of Shoreham-by-Sea.

West Dean is a village, Anglican parish and civil parish in the District of Chichester in West Sussex, England 5 miles (8 km) north of Chichester on the A286 road just west of Singleton. The parishes include the hamlets of Binderton and Chilgrove.

Rudgwick is a village and civil parish in the Horsham District of West Sussex, England. The village is 6 miles (10 km) west from Horsham on the north side of the A281 road. The parish's northern boundary forms part of the county boundary between Surrey and West Sussex.

North Stoke is a village in the Horsham District of West Sussex, England. It is just over 2 miles (3 km) north of Arundel and 0.7 miles (1 km) south of Amberley railway station, and is at the end of a no through road from the station.

Wiggonholt is a village in the Horsham District of West Sussex, England. It is 1.5 miles (2.4 km) southeast of Pulborough on the A283 road. The village consists of a farm, a few houses and a small Church of England parish church.

The Church of St Mary the Blessed Virgin, also known as St Mary the Virgin Church and St Mary's Church, is the Church of England parish church of Sompting in the Adur district of West Sussex. It stands on a rural lane north of the urban area that now surrounds the village, and retains much 11th- and 12th-century structure. Its most important architectural feature is the Saxon tower topped by a Rhenish helm, a four-sided pyramid-style gabled cap that is uncommon in England. English Heritage lists the church at Grade I for its architecture and history.

St Michael and All Angels Church is an Anglican church in the town of Southwick in the district of Adur, one of seven local government districts in the English county of West Sussex. Some Saxon-era structural work is still visible despite rebuilding work in the 12th and 13th centuries and in more recent times; and a church may have existed on the site as early as the 10th century—before the ancient settlement of Southwick even took that name. The church has been damaged by fire and bombing, but is still in active use as the area's parish church. English Heritage has listed it at Grade II* for its architectural and historical importance.

St Nicolas Church is an Anglican church in Old Shoreham, an ancient inland settlement that is now part of the town of Shoreham-by-Sea in the district of Adur, one of seven local government districts in the English county of West Sussex. It was founded on a riverside site by Anglo-Saxons at the start of the 10th century, possibly on the site of a 5th-century predecessor. Some Saxon-era structural elements remain despite 12th-century additions made when Shoreham became prosperous, further extension in the 14th century and a Victorian restoration. The cruciform structure, with its solid central tower, features some unusual Norman-era carving. English Heritage has listed it at Grade I for its architectural and historical importance.

Coombes Church is a Church of England parish church in the rural hamlet of Coombes in the Adur District of West Sussex, England. It has served the rural parish, northwest of Shoreham-by-Sea and next to the River Adur, since the 11th century. Despite several re-buildings, some structural elements remain from that period. An important series of wall paintings, dating from the 12th to the 18th century, were uncovered in 1949. English Heritage has listed the church at Grade I for its architectural and historical importance. 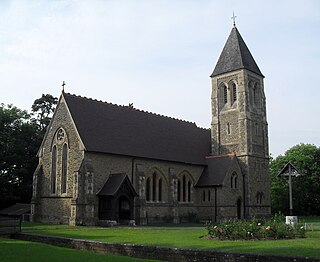 All Saints Church is the Anglican parish church of Roffey, in the Horsham district of the English county of West Sussex. The present church, built to serve the Victorian suburb of Roffey—part of the ancient market town of Horsham—replaced a schoolroom in which religious services had been held since 1856. Arthur Blomfield's Early English-style church, built of locally quarried sandstone and funded by a widow as a memorial to her late husband, was completed in 1878 and was allocated a parish immediately. Roman Catholic services were also held in the building to serve Roffey's Catholic population, but these ceased in the early 21st century. English Heritage has listed the church at Grade II for its architectural and historical importance. 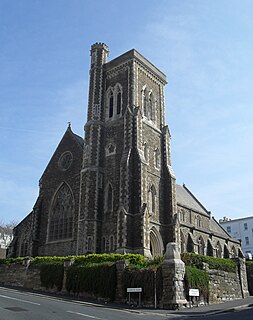 St Mary Magdalene's Church is a Greek Orthodox place of worship in St Leonards-on-Sea, a town and seaside resort which is part of the Borough of Hastings in East Sussex, England. Dedicated to Jesus' companion Mary Magdalene and built in 1852 for Anglican worshippers in the growing new town of St Leonards-on-Sea, a seaside resort which had been laid out from the 1820s, the church's prominent position on the skyline overlooking the town was enhanced in 1872 by the addition of a tower. No longer required by the Anglican community in the 1980s, it was quickly bought by the Greek Orthodox Church and converted into a place of worship in accordance with their requirements. The alterations were minimal, though, and the building retains many of its original fittings and its "archaeologically correct Gothic" exterior which reflected architectural norms of the early Victorian era. English Heritage has listed the church at Grade II for its architectural and historical importance. 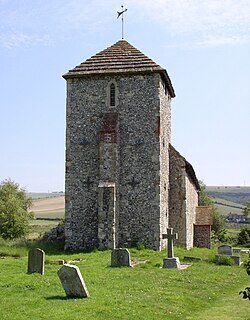 The Grade I listed Saxon church of St Botolph's at Botolphs, West Sussex, England, is situated in the valley of the River Adur and is now part of the Church of England parish of Beeding and Bramber with Botolphs. An earlier dedication to St Peter de Vetere Ponte is now lost, like the bridge over the Adur from which it took this ancient name. The church serves the mostly depopulated hamlet of Botolphs in the Horsham district of West Sussex. The church has fragments of medieval wall paintings. Architectural historian Ian Nairn comments that the Jacobean pulpit is "notable in a county which is poor in 17th century fittings".

St Michael and All Angels Church is a late nineteenth-century church in the settlement of Partridge Green in the parish of West Grinstead in West Sussex. It was built to cater for the then growing population of the village. Ian Nairn, in the Sussex volume of The Buildings of England, approves of the simplicity of this "flint village church" and comments that most "other counties would have had it much fussier".