The Summerside Police Department is the police force for the city of Summerside, Prince Edward Island, Canada.

The force has 35 officers. It is headed by Chief J. David Poirier. [1] The Summerside Police Department shares responsibility with the East Prince Detachment of the Royal Canadian Mounted Police (RCMP) for patrolling provincial Route 1A and Route 2 which pass along the east and north sides of the city.

The Royal Canadian Mounted Police is the federal and national police force of Canada. The RCMP provides law enforcement at the federal level. It also provides provincial policing in eight of Canada's provinces and local policing on contract basis in the three territories and more than 150 municipalities, 600 aboriginal communities, and three international airports. The RCMP does not provide provincial or municipal policing in Ontario or Quebec.

The force's operations include:

The Ford Crown Victoria is a full-size sedan that was marketed and manufactured by Ford from the 1992 to the 2011 model years. The successor to the Ford LTD Crown Victoria, the Ford Crown Victoria served as the flagship sedan of the Ford model line, slotted above the Ford Taurus and as the Ford counterpart of the Mercury Grand Marquis. Produced across two generations, the Crown Victoria was sold exclusively as a four-door sedan. Ford marketed the purpose-built Ford Crown Victoria Police Interceptor police car variant to law-enforcement agencies; a long-wheelbase sedan for commercial (taxi) use was introduced in 2002.

The Dodge Charger is a model of automobile marketed by Dodge. The first Charger was a show car in 1964. There have been several different production Chargers, built on three different platforms and sizes. In the United States, the Charger nameplate has been used on subcompact hatchbacks, full-sized sedans, and personal luxury coupes. The current version is a four-door sedan. 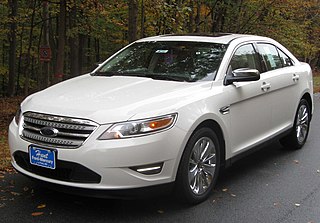 The Ford Taurus is an automobile that was manufactured by Ford in the United States from model years 1986–2019, and currently by Changan Ford in China. Produced in six generations for the North American market, the Taurus was originally introduced in 1985 for the 1986 model year, and had remained in near-continuous production for more than three decades. It has a Mercury-branded twin, the Sable, as well as a performance variant, the Ford Taurus SHO ; in addition, it served as the basis for the first-ever front-wheel drive Lincoln Continental (1987–2002). It was a front-wheel drive mid-size car until 2007, and has been a "global" full-size car since 2007, and available in front- or all-wheel drive since 2007.

Lennie Gallant, CM is a Canadian singer-songwriter and instrumentalist from Prince Edward Island. His music crosses into the folk rock and country music genres, while celebrating the musical heritage of his home province. He has been presented with many awards for his performances and songwriting.

Merseyside Police is the territorial police force responsible for policing Merseyside in North West England. The service area is 647 square kilometres with a population of around 1.5 million. As of September 2017 the service has 3,484 police officers, 1,619 police staff, 253 police community support officers, 155 designated officers and 208 special constables. In terms of officer numbers, the force is the 8th largest of the 48 police forces of the United Kingdom. However, in terms of geographic area of responsibility, it is the 3rd smallest of the territorial police forces after the City of London Police and Cleveland Police. The force is led by Chief Constable Andy Cooke. 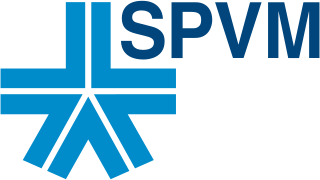 The Service de police de la Ville de Montréal (SPVM) is the police force for the city of Montreal, Quebec, Canada and the neighboring communities in the Urban agglomeration of Montreal. With about 4,600 officers and 1,600 civilian staff, it is the second largest municipal police agency in Canada after the Toronto Police Service and second largest in the province behind the Sûreté du Québec.

The Vancouver Police Department (VPD) is the police force for the City of Vancouver in British Columbia, Canada. It is one of several police departments within the Metro Vancouver Area and is the second largest police force in the province after RCMP "E" Division.

The Edmonton Police Service (EPS) is the municipal police force for the City of Edmonton, Alberta, Canada. The current chief of the EPS is Dale McFee.

The Winnipeg Police Service is the police force of the city of Winnipeg, Manitoba, Canada.

The Fredericton Police are the police force for the City of Fredericton, New Brunswick.

Route 1 is a 120-kilometre (75 mi) long provincial highway that serves as the Prince Edward Island section of the Trans-Canada Highway. Route 1 traverses the southern shores of Prince Edward Island, from the Confederation Bridge in Borden-Carleton to the Wood Islands ferry dock. It is an uncontrolled access 2-lane highway with a maximum speed limit of 90 km/h (55 mph), except within some towns and the city of Charlottetown.

Basil Stewart is a Canadian politician who served as the mayor of Summerside, Prince Edward Island from 1985 to 2014. He served as the president of the Canadian Federation of Municipalities in 2009–2010. Stewart was defeated in the 2014 Summerside mayoral election by Bill Martin. 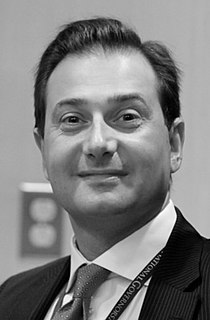 The 2007 Prince Edward Island general election was held on May 28, 2007. It elected members of the Legislative Assembly of the Province of Prince Edward Island, Canada. The incumbent Progressive Conservative government was defeated by the Liberal opposition after holding power for eleven years.

The Progressive Conservative Party of Prince Edward Island held a leadership election in Charlottetown on October 2, 2010 to select a new leader after the resignation of Pat Binns on August 30, 2007 following the defeat of the party in the 2007 general election. Olive Crane was appointed interim leader on September 4, 2007 and served until June 2010 when she resigned to successfully run for leader. Jamie Ballem, Fred McCardle, Jamie Fox, and Peter Llewellyn were all also candidates for the party's leadership.

Janice Sherry is a Canadian politician, who served in the Legislative Assembly of Prince Edward Island from 2007 to 2016. She represented the electoral district of Summerside-Wilmot as a member of the Liberal Party.

The Progressive Conservative Party of Prince Edward Island selected a new leader on February 28, 2015, to replace Olive Crane who resigned on January 31, 2013. The Progressive Conservatives have been the Official Opposition in the Legislative Assembly of Prince Edward Island since June 12, 2007, having lost the 2007 and 2011 provincial elections to the Liberals. The interim leader was Steven Myers. 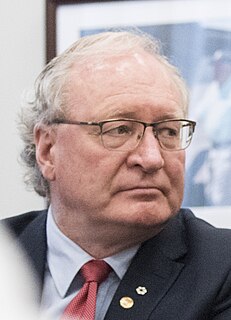 Municipal elections are being held in the Canadian province of Prince Edward Island on November 5, 2018.