The Tallangatta and District Football League (TDFL) is an Australian rules football competition in north-east Victoria and the southern border area of Riverina region of the New South Wales. The clubs compete across four competitions, two of which are age restricted (Under 17s, and Under 14s).

Today all of the 12 clubs across both the TDFL & TDNA are joint Football Netball Clubs, with the overall best club across all football and netball competitions for the season awarded the Club Championship.

The Tallangatta and District Football League was officially formed in 1945 comprising six teams and kicked off on 21 April 1945. The final ladder positions for the 1945 season were as follows, with the top four clubs playing finals:

In 2003 both the Beechworth Bombers & Rutherglen Cats applied for an application to join the Tallangatta & District Football League but were refused by their current league's board, Ovens & King Football League. Seeking a new home the clubs took their appeal to the Victoria Country Football League and won the right to join the Tallangatta & District Football League from the 2004 season. While Rutherglen were unable to achieve the ultimate success in the Ovens and King Football League they were allowed to keep the Cats as their moniker along with the "Geelong-Style" Navy & White home jumper. Beechworth claimed the O&K flag on 14 occasions (1912, 1913, 1914, 1937, 1938, 1939, 1950, 1951, 1956, 1961, 1974, 1979, 2000, 2001) but were left with no choice then to find a new moniker and jumper, because the Dederang-Mt. Beauty Football Club already used the Bombers as their moniker along with the "Essendon-Style" Red & Black home jumper. Prior to the start of the 2004 season the club unveiled their new identity, they adopted the Bushrangers as their moniker along with the "Port Melbourne-Style" Blue & Red home jumper.

The Wahgunyah Tigers were granted permission to join from the 2008 season after the Coreen & District Football League went into recess at the conclusion of the 2007 season, having won 7 senior football premierships over their 51 years with the league (1948, 1949, 1968, 1997, 1998, 2002, 2004). Because the Barnawartha Football Club already used the Tigers as their moniker along with the "Richmond-Style" Yellow & Black home jumper. Wahgunyah were left with no choice but to find a new moniker and jumper. Prior to the start of the 2008 season the club unveiled their new identity, they adopted the Lions as their moniker along with the "Brisbane Lions-Style" Maroon, Blue & Gold home jumper. [2]

Since 1974 the TDFL has used the "McIntyre System". The final series is played over four weekends, with the Grand Final traditionally being played on the second weekend of September. Also the TDFL board deems that all finals will be held at the natural venue of the Sandy Creek Recreation Reserve (Sandy Creek, Victoria), with all finals for both Football & Netball are played at the one venue during each final day. The Grand Final since 1971 has also been held at Sandy Creek Recreation Reserve (Sandy Creek, Victoria), commonly referred to by locals as "The MCG of the Bush" for its large playing surface & picturesque surroundings. The last finals match held away from Sandy Creek was the "1989 Second Semi Final" held at Bunton Park (North Albury, New South Wales), and the last grand final match held away from Sandy Creek was the "1970 Grand Final" held at the Barnawartha Recreation Reserve (Barnawartha, Victoria).

The Barton Medal is awarded to the Fairest and The Best Player each year.

Simon Corr of Yackandandah claims to have won 2.5 and is known as one of the competitions greats

Lavington is the largest suburb of the city of Albury, New South Wales, located north of the Albury Central Business District. At the 2021 census, Lavington had a population of 13,073. Lavington is a mostly flat area near Nail Can Hill to the west, and is bordered by Thurgoona to the east, Hamilton Valley to the west, Springdale Heights to the north, and North Albury to the south. Lavington is mostly residential, but has significant rural areas in the north-west and a commercial area. Features include Lavington Square Shopping Centre, Lavington Swim Centre, Jelbart Park and 5 schools . Lavington is the second major centre of the City of Albury, with its own commercial CBD.

Lavington Sports Ground is a sports ground located in the suburb of Hamilton Valley near Lavington on the north-west fringe of the city of Albury, Australia. The oval is nestled in the side of a hill, with concrete terraces cut into the southern side of the oval below a grass embankment and the grandstand and changing rooms located on the north-west flank. The venue also incorporates a 4 table cricket wicket, a velodrome for track cycling and two netball courts. The Lavington Panthers Sports Club licensed club was formerly located next to the ground, across Hanna Street.

The Hume Australian Football Netball League (HFNL), often shortened to Hume Football League, is an Australian rules football and netball competition containing twelve clubs based in the South West Slopes and southern Riverina regions of New South Wales, Australia. The league features four grades in the Australian rules football competition, with these being First-Grade, Reserve-Grade, Under 17s and Under 14s. In the netball competition, there are six grades, with these being A-Grade, B-Grade, C-Grade, C-Reserve Grade, Intermediates and Juniors.

The Ovens and Murray Football Netball League (O&MFNL) is an Australian rules football and netball competition containing ten clubs based in north-eastern Victoria, the southern Riverina region of New South Wales and the Ovens and Murray area. The name comes from the Ovens River, the river in the part of north-eastern Victoria covered by the league, and the Murray River, which separates Victoria and New South Wales. 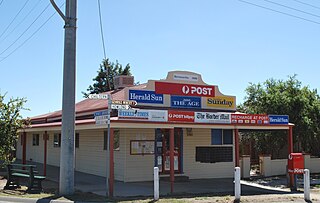 Barnawartha is a small town located on the Hume Highway in regional north-east Victoria, Australia, approximately 299 kilometres (186 mi) from Melbourne on the banks of Indigo Creek which runs into the Murray River to the north. Barnawartha commercial centre is located around the High Street, the indigo creek park accessed via High Street fronts the creek of the same name and includes a recently rebuilt public toilet, BBQ facilities and a walking track. 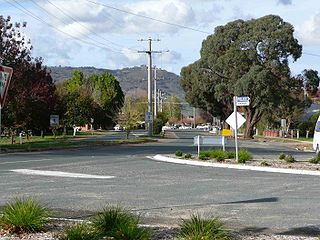 Walwa, is a town in the Shire of Towong in north east Victoria, Australia. The town is located 1 kilometre from the Murray River on the former Murray Valley highway between Wodonga and Corryong. At the 2016 census, the Walwa population had declined to just 177 having been 268 just ten years earlier.

The Thurgoona Football Netball Club, nicknamed the Bulldogs, is an Australian rules football and netball club playing in the Tallangatta & District Football League. The club is based in Thurgoona, New South Wales

The Kiewa-Sandy Creek Football Club, nicknamed the Hawks, is an Australian rules football club playing in the Tallangatta & District Football League. The club is based in the Victorian towns of Kiewa, Sandy Creek and Tangambalanga. 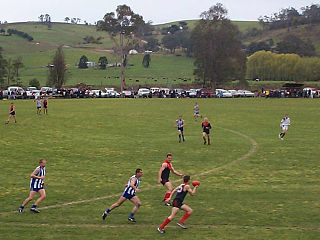 The Wodonga Football Netball Club, nicknamed the Bulldogs, is an Australian rules football and netball club based in the city of Wodonga, Victoria.

Bullioh Football Netball Club, nicknamed the Bulldogs, is an Australian rules football club which plays in the Upper Murray Football League. The club is based in Victorian district of Bullioh and plays its home games 13 km away at Wyeebo Recreation Reserve in the Victoria district of Tallangatta. 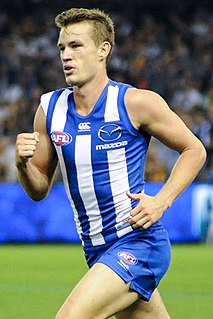 The Tallangatta Football Netball Club, nicknamed the Hoppers, is an Australian rules football and netball club based in Tallangatta, Victoria playing in the Tallangatta & District Football League (TDFL) & is also a founding member club of the League.

The Chiltern & District Football Association was first established in 1912 from the following Australian Rules Football clubs - Barnawartha, Chiltern, Chiltern Valley, Christmastown, Southern and Wodonga, in North Eastern Victoria, Australia and was an active competition until 1956 when it was wound up..