The inscription at the base of the Cenotaph reads:

The Cenotaph was built in memory of the 124 British soldiers born or resident in Singapore who gave their lives in World War I (1914–1918), with a second dedication (but no names) added in remembrance of those who died in World War II (1941–1945).

The structure was designed by Denis Santry of Swan & Maclaren. The foundation stone was laid by Sir Lawrence Nunns Guillemard, the Governor of the Straits Settlements, on 15 November 1920. In attendance was the visiting French Premier, Georges Clemenceau who was the French Minister of War from 1917 to 1919.

The memorial was completed in 1922, and was unveiled on 31 March that year by the young Prince Edward of Wales, later King Edward VIII then Duke of Windsor, during his Asia-Pacific tour. During the unveiling ceremony, a chaplain blessed the Cenotaph with the words, "The stone is well laid and truly laid to the Glory of God and the memory of the illustrious dead." Against the backdrop of the sea then fronting Queen Elizabeth Walk, Governor Guillemard awarded medals of courage to those who had served in the war.

In Prince Edward's entourage was Louis Mountbatten. At the end of World War II, Mountbatten returned to Singapore as the Supreme Commander of the South East Asia Command to receive the surrender of the Japanese at City Hall on 12 September 1945.

In 28 December 2010, The Cenotaph was gazetted by Preservation of Monuments Board as a National Monument along with Lim Bo Seng Memorial and Tan Kim Seng Fountain at the Esplanade Park and the Singapore Conference Hall along Shenton Way. [1] [2]

On 23 April 2013, the Cenotaph was vandalised by someone who sprayed the word "DEMOCRACY" on the monument as well as an "X" which crossed out the text "1914 to 1918". Six days later, Mohamad Khalid Mohamad Yusop was arrested and charged with one count of vandalism under the Vandalism Act. [3] [4] On 26 August 2013, a district court ordered Khalid to pay S$208 for the cost of repairs in addition to sentencing him to three months' jail and three strokes of the cane. [5] 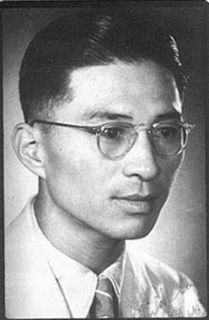 Lim Bo Seng was a Chinese resistance fighter based in Singapore and Malaya during World War II. Before the outbreak of War World II, he was a prominent businessman among the Chinese community in Singapore. When the Second Sino-Japanese War broke, he participated in anti-Japanese activities in Malaya and Singapore. During Japanese occupation of Malaya and Singapore, he was tasked to establish Force 136, a guerrilla task force backed by Special Operations Executive (SOE). However, he was captured by Japanese forces and died while interred. After the war, he is remembered as a war hero in Singapore. 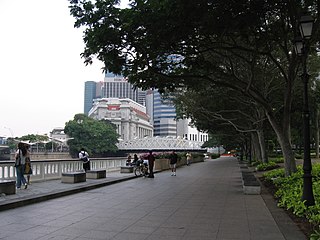 The Esplanade is a waterfront location just north of the mouth of the Singapore River in downtown Singapore. It is primarily occupied by the Esplanade Park, and was the venue for one of Singapore's largest congregation of satay outlets until their relocation to Clarke Quay as a result of the construction of a major performance arts venue, the Esplanade - Theatres on the Bay, which took its name from this location.

Chung Cheng High School (Main) is a co-educational secondary school in Singapore. Founded in 1939, it is one of the eleven Special Assistance Plan (SAP) schools in Singapore.

Caning is a widely used form of corporal punishment in Singapore. It can be divided into several contexts: judicial, prison, reformatory, military, school, and domestic. These practices of caning are largely a legacy of, and are influenced by, British colonial rule in Singapore. Similar forms of corporal punishment are also used in some other former British colonies, including two of Singapore's neighbouring countries, Malaysia and Brunei.

The Victoria Theatre and Concert Hall is a performing arts center in the Central Area of Singapore, situated along Empress Place. It is a complex of two buildings and a clock tower joined together by a common corridor; the oldest part of the building was first built in 1862, and the complex was completed in 1909. The complex has undergone a number of renovations and refurbishment, mostly recently in 2010 when the complex was closed for a four-year renovation project. It reopened on 15 July 2014.

The Memorial to the Civilian Victims of the Japanese Occupation, usually called the Civilian War Memorial is a war memorial and heritage landmark in Singapore next to Esplanade MRT station. It was built in memory of the civilians killed during the Japanese occupation of Singapore during World War II. The Civilian War Memorial sits on serene parkland in the midst of busy city traffic near Singapore's Padang and City Hall. Located within the War Memorial Park at Beach Road within the Central Area, Singapore's central business district, it is usually easy to spot in most backdrops encompassing the CBD landscape. It was gazetted as a 65th national memorial on 15 August 2013.

The Queen Elizabeth Walk is a promenade located at the Esplanade Park within the Downtown Core district of the Central Area of Singapore.

The Former Indian National Army Monument is a historical site and a demolished war memorial at the Esplanade Park located at Connaught Drive within the downtown of Singapore.

The Esplanade Park is a historic park located at the Esplanade within the Downtown Core of the Central Area of Singapore.

The Lim Bo Seng Memorial is an octagonal pagoda-like war memorial at Esplanade Park, Singapore. It was erected in 1954 in honour of the late Lim Bo Seng for his heroic acts and selfless sacrifice during the World War II. The war memorial is the only structure in Singapore that commemorates an individual's efforts in World War II and was gazetted as a national monument in 28 December 2010. 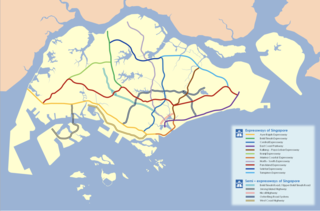 Nicoll Highway is a major arterial road in Singapore which links the junctions of Guillemard Road, Sims Way and Mountbatten Road in Kallang to the junctions of Esplanade Drive, Raffles Avenue and Stamford Road in the city. En route, it passes through the areas of Kallang, Kampong Glam and Marina Centre.

The Vandalism Act is a statute of the Parliament of Singapore that criminalizes a number of different acts done in relation to public and private property, namely, stealing, destroying or damaging public property; and, without the property owner's written consent, writing, drawing, painting, marking or inscribing on property; affixing posters, placards, etc., to the property; and suspending or displaying on or from the property any flag, banner, etc.

The Japanese Cemetery Park is a Japanese cemetery and park in Hougang, Singapore. It is the largest Japanese cemetery in Southeast Asia at 29,359 square metres, consisting of 910 tombstones that contain the remains of members of the Japanese community in Singapore, including young Japanese prostitutes, civilians, soldiers and convicted war criminals executed in Changi Prison. It was gazetted as a memorial park by the Singapore government in 1987. 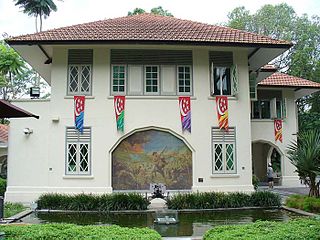 Reflections at Bukit Chandu is a World War II interpretive centre developed and managed by the National Archives of Singapore, located on Bukit Chandu off Pasir Panjang Road in Singapore.

The Queen Victoria Memorial in George Town, Penang is a monument to Queen Victoria, begun after her death, located at the Penang Chinese Recreation Club. Penang's Victoria Memorial takes the form of a large piece of land known as "Victoria Green," and a statue at the edge of Victoria Green at the junction of Burmah Road and Pangkor Road, the establishment of each being years apart from the other. The grounds were purchased and set up in 1903 and the statue unveiled in 1930, nearly three decades later.

The Tan Kim Seng Fountain is a fountain in Singapore that was erected in 1882 in honor of notable philanthropist Tan Kim Seng for his donations for the Singapore’s first reservoir and waterworks.

Lim Teck Yin is the CEO of Sport Singapore. He retired as a brigadier-general from the Singapore Armed Forces (SAF) after 30 years of military service. Throughout his career, Lim has been involved in competitive sports as he sought to further his primary job in the Army. Lim was a former national water polo player with seven Southeast Asian Games medals, and a recipient of the Singapore National Olympic Council Team of the Year Award for 1986, 1989 and 1991.