The Thomas F. Ricks House, also known as the Y.W.C.A. House, The Palms and St. Francis Hospital at 730 H. Street, Eureka, California was designed and built by Fred and Walter Butterfield in 1885 for owners Thomas Fouts Ricks and his wife, Eva. It was listed on the National Register of Historic Places in October 1992. [1]

The building is a two-story detached Eastlake ornamented dwelling with three bays and a 1.5-story rear addition located on a quarter city block. [2] The house is architecturally significant as most detailed example of Eastlake style in Eureka. [2] [3]

Thomas F. Ricks (1855–1908) was born in Eureka, California, the son of 49-er Caspar S. Ricks (November 10, 1821 Rome, Indiana - June 21, 1888 San Francisco) who built many business and residential blocks in Eureka and Adaline A. Fouts of Clark County, Indiana who also owned Eureka property independent from that of her husband. [4] The children of C.S. Ricks were well-to-do, socially prominent and influential. [5] Thomas Ricks owned the Ricks Livery Stable. [4] Thomas' younger brother, Hiram Lambert Ricks (1860 - January 27, 1921) established the present day Eureka water system, then named the "Ricks Water Company", served as Mayor of Eureka, and began campaigning for the Northwestern Pacific Railroad to Captain A.H. Payson, then president of the line. [5] Both Mr. and Mrs. Thomas Ricks had extensive property holdings in Eureka, and Mrs. Rick's business extended as far as San Francisco, to which she traveled frequently. [2] Thomas Ricks died in 1908, aged 53. [2]

The building served as a private home from 1885 until Mrs. Ricks leased it to the privately owned St. Francis Hospital from 1907 to 1910. [2] While the exterior was unchanged, the interior was modified to support hospital operations. [2] Subsequently, from 1910 to 1925, it became Sequoia Hospital. [2] In 1925 the building was sold to Charles J.A. Nelson who turned it into a boarding house named "The Palms." [2] In 1935, the building became the Y.W.C.A. local chapter headquarters. [2] The Y.W.C.A. owned the house until the late 1980s when College of the Redwoods purchased it. [2]

Thomas Ricks may refer to:

The Scottsburg Courthouse Square Historic District is a national historic district located at Scottsburg, Scott County, Indiana. The district encompasses 48 contributing buildings and 8 contributing objects in the central business district of Scottsburg centered on the Scott County Courthouse. It developed between about 1873 and 1952, and includes notable examples of Italianate, Romanesque Revival, Gothic Revival, and Stick Style / Eastlake Movement style architecture. The courthouse was built in 1873-1874 after the decision was made to finally locate the county seat of Scott County into a central location within the county, which caused the founding of Scottsburg. Located in the district is the separately listed Scottsburg Depot. Other notable contributing resources include the Town Tavern (1924), A&P Grocery (1923), Corner Drugstore, Harmon Building (1907), City Hall (1899-1900), Napper's Hospital (1936), Scott Theatre (1946), Scott County Public (Carnegie) Library (1919), Scott County Bank (1906), Prosser's Hardware (1912), and a statue of William Hayden English (1908). 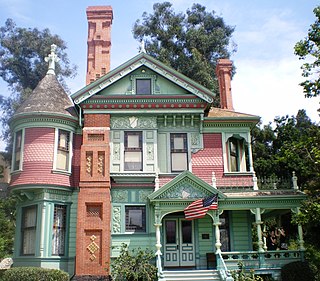 Heritage Square Museum is a living history and open-air architecture museum located beside the Arroyo Seco Parkway in the Montecito Heights neighborhood of Los Angeles, California, in the southern Arroyo Seco area. The living history museum shows the story of development in Southern California through historical architectural examples.

The Clarke Historical Museum in Eureka, California contains the area's premier collection of California North Coast regional and cultural history. The facility has an entire Native American wing, Nealis Hall, which features an extensive internationally recognized collection of basketry, regalia, stoneware, implements, and other objects indicative of the culture and creativity of local and regional Native American groups including the Wiyot, Yurok, Karuk and Hupa Tribes. The Eureka Visitors Center is located in the main hall of the museum. The Clarke Museum is a 501 (c)3 non-profit.

The Dr. Nelson Wilson House is a place on the National Register of Historic Places in Washington, Indiana. It was placed on the Register on June 26, 2008, due to its unique architecture, and for being the work of prominent local architect John W. Gaddis. The Daviess County Interim Report gave the house its highest rating: "Outstanding".

The William S. Clark House, in Eureka, Humboldt County, northern California was built in 1888 by master carpenter Fred B. Butterfield. Its design includes elements of both Stick-Eastlake and Queen Anne Styles of Victorian architecture.

Queen Anne style architecture was one of a number of popular Victorian architectural styles that emerged in the United States during the period from roughly 1880 to 1910. Popular there during this time, it followed the Eastlake style and preceded the Richardsonian Romanesque and Shingle styles.

The Carson Mansion is a large Victorian house located in Old Town, Eureka, California. Regarded as one of the highest executions of American Queen Anne style architecture, the house is "considered the most grand Victorian home in America." It is one of the most written about and photographed Victorian houses in California and possibly also in the United States.

The Knight–Allen House is a historic house located in Provo, Utah. It is listed on the National Register of Historic Places. 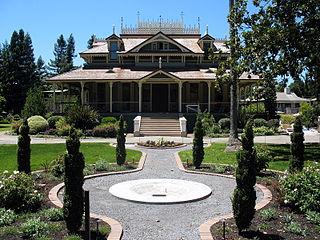 The McDonald Mansion, also known as Mableton, is an historic residence in Santa Rosa, California. It was built in 1876 in the Victorian Stick/Eastlake style as a summer home for the McDonald family, whose primary residence was in San Francisco. 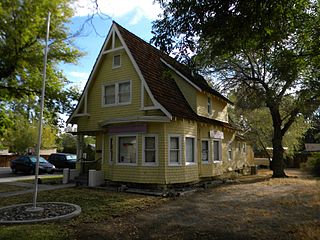 The George L. Sanford House, at 405 N. Roop St. in Carson City, Nevada, United States, was built in c.1910. It includes Bungalow/craftsman, Stick/Eastlake, and Second Empire architecture. It was listed on the National Register of Historic Places in 1994; the listing included two contributing buildings.

Thomas W. Swinney House, also known as The Swinney Homestead, is a historic home located at Fort Wayne, Indiana. It was built in 1844-1845 as a 1 1/2-story brick and limestone structure. It was enlarged with a 2 1/2-story, square, Late Victorian style brick wing about 1885. It features an Eastlake Movement front porch. It was built by Thomas J. Swinney, a pioneer settler of Allen County and prominent Fort Wayne businessman. The house and land for Swinney Park were passed to the city of Fort Wayne in 1922.

Samuel Newsom was a Canadian-born American architect. Together with his brother Joseph Cather Newsom founded the architecture firm Newsom and Newsom, practicing in Northern and Southern California. Their most celebrated house is the Carson Mansion in Eureka, California.