Thomas Fotaq Strakosha (born 19 March 1995) is an Albanian professional footballer who plays as a goalkeeper for Italian club Lazio and the Albania national team.

Strakosha began his youth career in 2011 at Panionios, from where in the next year he was signed by Lazio for a €75,000 transfer fee. [1] [2] He became a regular starter for the Primavera team and was a key player with the primavera team that won the 2012–13 Campionato Nazionale Primavera after defeating Atalanta Primavera in the final, 3–0. [3]

Following the departure of Lazio first-team starting goalkeeper Juan Pablo Carrizo to Internazionale, in the second half of the 2012–13 season, Strakosha gained entry with the first team as third-choice goalkeeper, behind Federico Marchetti and Albano Bizzarri. He was member of the team that won 2012–13 Coppa Italia after defeating city rivals Roma 0–1 in the final on 26 May 2013. [4] [5] On 18 August 2013, Strakosha was again on the substitutes' bench as Lazio lost 4–0 to Juventus in the 2013 Supercoppa Italiana. [6]

On 2 September 2013, Lazio sold Bizzarri to Genoa and at the same time purchased fellow Albanian goalkeeper Etrit Berisha from Kalmar. This made Strakosha to stand still as a third choice and being only an unused substitute for the 2013–14 season behind the strong challenge for the starting place between Berisha and Marchetti. [7]

In July 2015, Lazio agreed to loan Strakosha to newly promoted Serie B side Salernitana. [10] He was allocated squad number 12, and made his professional debut on 9 August 2015 in the 1–0 win against Pisa for the 2015–16 Coppa Italia second round. [11] A week after his debut, Strakosha played another Coppa Italia match, making several decisive saves and keeping his goal intact for 120 minutes as Salernitana won 1–0 against Chievo Verona to progress to the next round. [12]

Strakosha made his league debut for Salernitana on 6 September in the opening 2015–16 Serie B match against Avellino where he managed to play the full 90-minutes match and his side won 3–1. [13] He was an unused substitute in the next Coppa Italia game on 1 December 2015 against Spezia as the coach Vincenzo Torrente gave the starting place to Pietro Terracciano as Salernitana was eliminated from Coppa Italia, losing the game by 2–0. [14]

Return to Lazio and breakthrough into first-team

In July 2016, following the loan's end, Strakosha returned to Lazio. [15] With the injury of Marchetti and the departure of Berisha to Atalanta, Strakosha was able to make his Lazio debut on 20 September in the league match against Milan. [16] Despite the 2–0 defeat, Strakosha's performance was considered positive, being man of the match for Lazio. [17] Five days later, Strakosha collected his first Serie A clean-sheet only in his second appearance in the 2–0 home win against Empoli, which led the 1982 FIFA World Cup-winner Dino Zoff to praise him by saying: "I can not judge him with only two matches played, but, according to me, he performed well in both matches." [18]

On 22 February 2017, Strakosha renewed his contract with Lazio until 2022. [19] He went on to play as starter until the end of the season, collecting 1844 minutes on field, as Lazio finished the championship in 5th position. He also contributed with 4 matches in the Coppa Italia, including the final, as Lazio was defeated by Juventus 2–0. [20]

Strakosha started the 2017–18 season on 13 August 2017 by playing in the 2017 Supercoppa Italiana against Juventus, winning his maiden trophy as Lazio won 3–2 after a last-minute goal. [21] Against the same opponent on 14 October, Strakosha saved Paulo Dybala's penalty in the 97th minute to rescue a 1–2 win for his team and to put Lazio in 3rd position. [22] It was Strakosha's first Serie A penalty save and Juventus' first Serie A home defeat since August 2015. [22] A week later, he agreed a contract extension, signing until June 2022. Later, he was named as the best young goalkeeper of the 2017–18 season. [23]

Strakosha was called up for the first time to Albania's U17 squad by coach Džemal Mustedanagić to participate in the 2012 UEFA European Under-17 Championship elite round. He was an unused substitute for all 3 matches, serving as second choice goalkeeper behind Aldo Teqja. [24]

Strakosha was called up to the Albania national under-19 football team to participate in the 2013 UEFA European Under-19 Championship qualification, coached by his father, Foto Strakosha. [25] Thomas played every minute of all 3 matches of the Group 7. Albania finished in the 4th place, with Strakosha conceding in total 6 goals, despite Albania beating top of the table Belgium 3–1 with goals from Enis Gavazaj, Elvis Kabashi and Lorenc Shehaj. [26] [27] [28] [29]

In the 2014 UEFA European Under-19 Championship qualification, Strakosha again played every minute in all 3 matches of the Group 6, leaving behind youth Juventus goalkeeper, Entonjo Elezaj. [30]

Strakosha was called up to the U20 team by coach Skënder Gega for the 2013 Mediterranean Games football tournament, which began on 19 June, in Mersin, Turkey. However, Strakosha didn't participate in any match of the tournament. [31]

Strakosha was selected for the Albania U21 side that took part in the 2015 UEFA Euro Under-21 qualification. He played in half of all Group 4 matches (4 of 8), as the 4 other matches were played by fellow goalkeepers, Aldo Teqja and Orestis Menka, who each played 2 matches. [32]

In the 2017 UEFA European Under-21 Championship qualification he retained his starting place playing overall 7 out 10 games for full 90-minutes under coach Redi Jupi. He missed out the opening match due to the injury, the closing match due to engagement with Albania senior team and was left on the bench for 1 game against Portugal U21 as Jupi wanted to test Teqja. Following the engagement of Amir Rrahmani with Albania senior team and then his departure to Kosovo national team in September 2016, Strakosha became the under-21 team's captain playing for his 6 last games. [33]

Strakosha was called up for the first time to the senior Albania squad in August 2016 by coach Gianni De Biasi for the friendly match against Morocco on 31 August 2016 and the 2018 FIFA World Cup qualification opening match against North Macedonia on 5 September 2016 as a 4th choice keeper along Etrit Berisha, Orges Shehi and Alban Hoxha. [34] However, he did not feature in both matches. He continued to be part of the team for the next matches, making his competitive debut on 24 March 2017 due to Berisha's suspension in the match against Italy as Albania trailed 0–2. [35] He went on to make another appearance in Albania's 3–0 win over Israel as Albania finished Group G in 3rd position with 13 points. [36]

In a 2017 interview, Strakosha stated that his main influences and his Idol as a goalkeeper was his own father Foto Strakosha, whom he tries to imitate. [37]

Strakosha was born in Athens, Greece. His father, Foto, played as a goalkeeper for two Albanian clubs and several Greek clubs, in addition to representing the Albanian national team in the years spanning 1990–2005. [38] 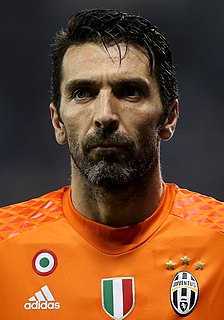 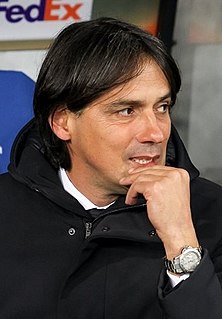 Simone Inzaghi is an Italian professional football manager and former player. He is the head coach of Serie A club Inter Milan.

Juan Pablo Carrizo is an Argentine professional footballer who plays as a goalkeeper.

Ștefan Daniel Radu is a Romanian professional footballer who plays as a left-back or a centre-back for Serie A club Lazio. 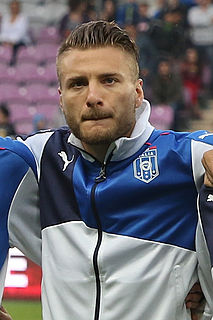 Ciro Immobile is an Italian professional footballer who plays as a striker for Serie A club Lazio and the Italy national team. 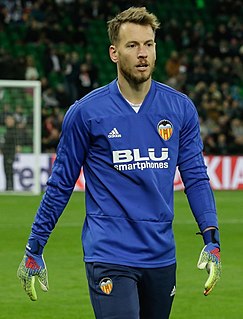 Norberto Murara Neto, commonly known as Neto, is a Brazilian professional footballer who plays as a goalkeeper for La Liga club Barcelona. 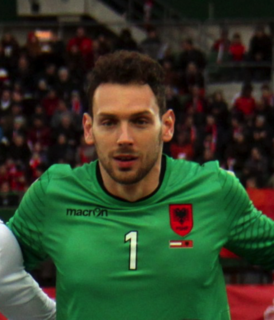 Etrit Fadil Berisha is an Albanian professional footballer who plays as a goalkeeper for Italian club Torino and captains the Albanian national team.

Elseid Gëzim Hysaj is an Albanian professional footballer who plays as a right-back for Serie A club Lazio and the Albania national team, for which he is captain. Hysaj can operate on both sides of the pitch as a full-back.

Andrés Felipe Tello Muñoz is a Colombian footballer who currently plays as a midfielder for Benevento.

Aldo Teqja is an Albanian professional footballer who plays as a goalkeeper for Albanian club FK Partizani Tirana.

Rey Manaj is an Albanian professional footballer who plays as a striker for Serie A club Spezia, on loan from Spanish club Barcelona. He also represents the Albania national team.

Christopher James Ikonomidis is an Australian professional footballer who plays as an attacking midfielder or as a winger for Melbourne Victory and the Australia national team. 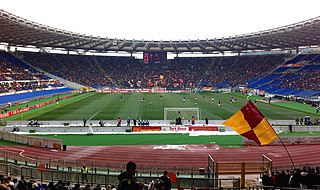 The 2015 Coppa Italia Final decided the winner of the 2014–15 Coppa Italia, the 68th season of Italy's main football cup. It was played on 20 May 2015 at the Stadio Olimpico in Rome, between Juventus and Lazio. Juventus won 2–1 after extra time for a record tenth title.

Dhimitri Fotaq Strakosha is a Greek–born Albanian professional footballer who last played as a striker for Ethnikos in the Greek third tier in 2015.

Entonjo Elezaj is a professional footballer who plays as a goalkeeper for Sliema Wanderers. Born in Italy, he has represented Albania at youth level.

This is a list of Albania national football team's all kinds of competitive records. The page is updated where necessary after each Albania match, and is correct as of 17 November 2019.

The 2017–18 season was the 117th season in Società Sportiva Lazio's history and their 30th consecutive season in the top-flight of Italian football. Lazio competed in Serie A, the Coppa Italia and the Europa League.

The 2017–18 Coppa Italia, also known as TIM Cup for sponsorship reasons, was the 71st edition of the national cup in Italian football. As a minimum, the winners of the Coppa Italia earn a place in the 2018–19 Europa League and would begin play in the group stage unless they qualify for a more favourable UEFA placing based on league play. Seventy-eight clubs participated in this season's cup competition.

The 2020–21 season was the 120th season in the existence of S.S. Lazio and the club's 33rd consecutive season in the top flight of Italian football. In addition to the domestic league, Lazio participated in this season's editions of the Coppa Italia and also participated in the UEFA Champions League. The season covered the period from 2 August 2020 to 30 June 2021.