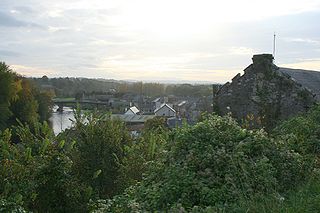 Ireland, also known as the Republic of Ireland, is a country in north-western Europe occupying 26 of 32 counties of the island of Ireland. The capital and largest city is Dublin, which is located on the eastern side of the island. Around a third of the country's population of 4.9 million people resides in the greater Dublin area. The sovereign state shares its only land border with Northern Ireland, a part of the United Kingdom. It is otherwise surrounded by the Atlantic Ocean, with the Celtic Sea to the south, St George's Channel to the south-east, and the Irish Sea to the east. It is a unitary, parliamentary republic. The legislature, the Oireachtas, consists of a lower house, Dáil Éireann, an upper house, Seanad Éireann, and an elected President who serves as the largely ceremonial head of state, but with some important powers and duties. The head of government is the Taoiseach, who is elected by the Dáil and appointed by the President; the Taoiseach in turn appoints other government ministers.

It is a station on the Dublin to Waterford Intercity route. [1] 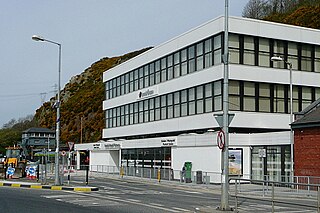 Unlike most other railway stations on the network, tickets are not available for purchase at Thomastown station and must be obtained on the train.

There is a disused low platform and signal box across the track. The track was removed from it in 2004 when mini-CTC signalling was installed. [2]

The Great Western main line (GWML) is a main line railway in England, that runs westwards from London Paddington to Bristol Temple Meads. Opened in 1841, it was the original route of the first Great Western Railway which was merged into the Western Region of British Railways in 1948. It is now a part of the national rail system managed by Network Rail with the majority of passenger services provided by the current Great Western Railway franchise.

Reservoir railway station is located on the Mernda line in Victoria, Australia. It serves the north-eastern Melbourne suburb of Reservoir, and opened on 8 October 1889 as Preston-Reservoir. It was renamed Reservoir on 1 December 1909.

Keon Park railway station is located on the Mernda line in Victoria, Australia. It serves the north-eastern Melbourne suburb of Thomastown, and opened on 16 December 1929 as Keonpark. It was renamed Keon Park in February 1972.

Thomastown railway station is located on the Mernda line, in Victoria, Australia. It serves the north-eastern Melbourne suburb of Thomastown, and opened on 23 December 1889. A completely redeveloped Thomastown station was opened in late 2011. 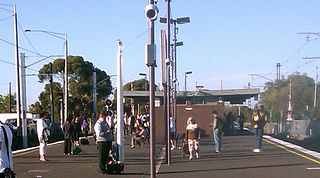 Lalor railway station is located on the Mernda line, in Victoria, Australia. It serves the north-eastern Melbourne suburb of Lalor, and opened in October 1949 as Rail Motor Stopping Place 77. It was renamed Lalor on 27 August 1952.

Epping railway station is located on the Mernda line, in Victoria, Australia. It serves the north-eastern Melbourne suburb of Epping. It opened on 23 December 1889, as a station on the line to Whittlesea. 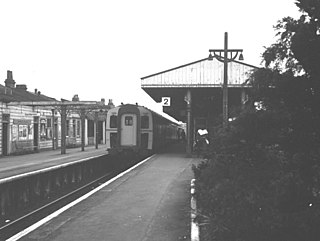 Ascot railway station serves the town of Ascot in Berkshire, England. It is 28 miles 79 chains (46.7 km) down the line from London Waterloo. The station, and all trains serving it, are operated by South Western Railway. It is at the junction of the Waterloo to Reading line with the Ascot to Guildford line.

Haverfordwest railway station serves the town of Haverfordwest in Pembrokeshire, Wales. It is 63 miles (101 km) west of Swansea on the Milford Haven branch of the West Wales line 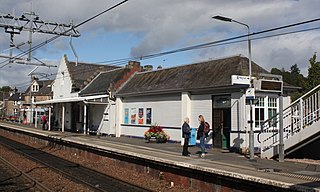 Dunblane railway station serves the town of Dunblane in central Scotland. It is located on the former Scottish Central Railway, between Stirling and Perth and opened with the line in 1848. 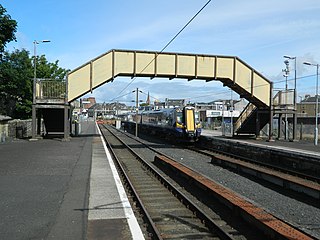 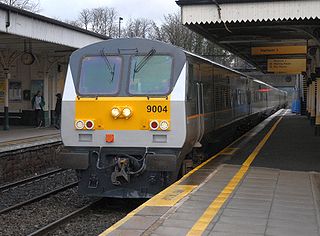 The Belfast–Dublin Main Line is a main and busiest railway route on the island of Ireland that connects Dublin Connolly station in the Republic of Ireland and Belfast Lanyon Place station in Northern Ireland. 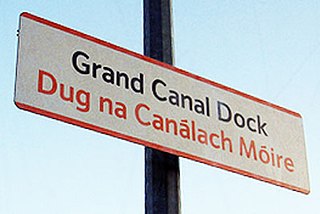 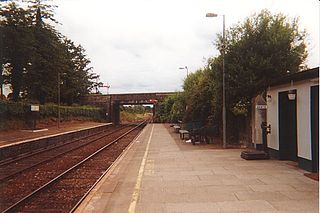 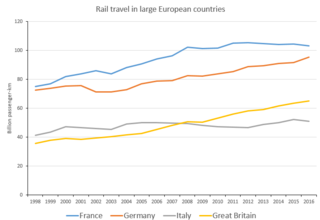 Rail transport in Europe is characterised by its diversity, both technical and infrastructural.