Thottamon is a village in Ranni, India. The place is home to people of all religious community and well known for its religious harmony and tolerance. Thottamon is an important part of Ranni due to the presence of a large number of Government institution like Ranni Civil Station, Ranni Gramapanchayath office, Thaluk office, Village office, Ranni police station more and more Government offices located at this place (close to Ranni town). It is a small village which lies in the banks of holy river Pamba. It is a golden land known for its fertile soil and availability of water.

The Devi Temple Thottamon Kavu Devi temple is its landmark. Thottamonkavu devi is believed the daughter of Paramashiva so the song "Mukkannan Thirumakale is famous" where Mukkannan is Shivan. It is a part of Ranni Taluk which lies in the valley of the Western Ghats.

Thottamon kavu Devi Temple is a resting place for pilgrims to sabarimala. The temple belongs to some nair families in Ranni. The family who administrated the temple were known as naaluveedanmaar(നാലുവീടന്മാർ ), the four nobles. The four Panikar families who held the title were Meempallil, Kerukattu, Pangattu, and Cheruthalayathu. Although the village is small, its proximity to major government organisations like village office, police station, banks, schools, colleges, sub registrar office, temples, churches make it a desirable place for real estate.

Edakkad is part of the Kannur Municipal Corporation in Kannur District of Kerala state, in India. 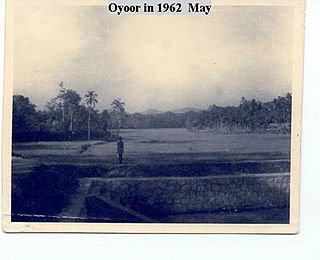 Oyoor is a small township of Velinalloor village in the Kottarakara Taluk, Kollam District of Kerala, India. It is situated on the banks of the Ithikkara River. It is surrounded by several small satellite villages: Ugramkunnu in the south, Chenkulam in the west, Mylode in the north and Karingannoor in the east.

Ezhumanthuruthu (എഴുമാന്തുരുത്ത്) is a small "thuruthu" i.e. island situated 8 km west of Kaduthuruthy town. It falls in the Kottayam district of Kerala state in India, the city of letters. It is a densely populated place of Kaduthuruthy Gram Panchayat.

Atpadi is an administrative town of the Atpadi Taluka of Sangli District in the Indian state of Maharashtra. Atpadi is located north-east of Sangli District and shares borders with the adjacent Solapur and Satara Districts. The town has a taluka administrative office, a courthouse, a police station, a government-run primary hospital, various schools and colleges and a theater. Atpadi's economy is based on the cultivation and sale of agricultural products, with pomegranates and cotton constituting the core of the industry. The town is also home to the Manganga Sahakari Sugar factory, a Pomegranate auction center and various small scale industries in fields such as manufacturing, processing, servicing and repairs.

Chathamangalam is a village in Kozhikode district of Kerala state, India. 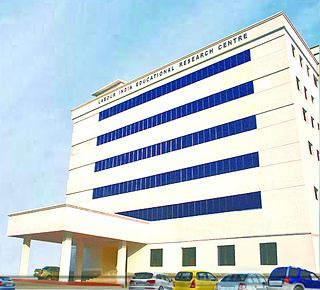 Marangattupilly is a small village and headquarters of Marangattupally Grama Panchayat in Kottayam district, Kerala. Most of its people are either farmers or engaged in small-scale business. Famous politician K M Mani, was born and brought up in this village. Another famous personality from this village is Santhosh George Kulangara. T K Jose IAS is from this village

Kadayanickadu is a village situated 11 km east of Karukachal, spread out on either sides of Changanacherry - Manimala road in Kerala, India. It is a typical Kerala rural settlement with the nature's green covering, ringing rivulets, small hills and slopes, agricultural fields, inhabited by rustic population. It is a Kara in Vellavoor revenue village in Changanacherry taluk, Kottayam district.

Kunhimangalam (കുഞ്ഞിമംഗലം) is a census town situated in the northern coastal part of Kannur District in Kerala state on the outskirt of Payyanur. The population in 2011 was around 19,000 including Hindus, Christians and Muslim residents. The village lies in an agricultural region.

Madaplathuruth is a village in Paravur Taluk, state of Kerala. Formerly known as Kuriapilly, it was a part of the Travancore kingdom in the British India. The village is 22 km away from Kochi. The ancient seaport of India, Muziris is located in Pattanam village 0.7 km away from this village. 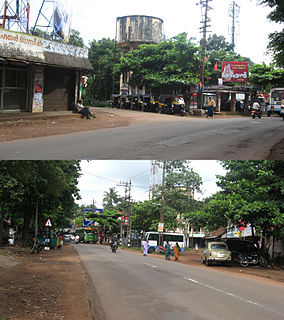 Punthalathazham is a landlocked neighbourhood of the city of Kollam in the Indian state of Kerala. It is located around six kilometres east of the core Kollam (Quilon) city towards Kannanalloor . This place has a little geographical importance and serves as the tail boundary of Kollam Municipal Corporation. Inhabitants belong to working and middle classes.

Karsog is a town and municipal area in the state of Himachal Pradesh in Northern India.