Aruvappulam is a remote village in the South Eastern corner of Pathanamthitta district in the state of Kerala, India. [1] Aruvappulam is a grama panchayat falling within Konni Thaluk. The highest point in the district Devar Mala is situated in the village. A sizeable portion of the village is within Konni Reserve Forest. The village shares geographic border with Tamil Nadu, but there is no interstate road connecting the village with the neighbouring state.

The major streams that flow into Achankovil river originates in the village. This river also forms the border between village and neighbouring district of Kollam.

The major settlements within the village are Kokkathode and Kalleli.

There is a strong trend of migration to Gulf Cooperation Council countries and United States from the village. An expat named KP George ran for the United States Congress in Texas in 2011. [2]

Malappuram is one of the 14 districts in the Indian state of Kerala, with a coastline of 70 km (43 mi). It is the most populous district of Kerala, which is home to around 13% of the total population of the state. The district was formed on 16 June 1969, spanning an area of about 3,554 km2 (1,372 sq mi). It is the third-largest district of Kerala by area, as well as the largest district in the state bounded by Western Ghats and Arabian Sea to the two sides. Malappuram is the third major contributing district to the Gross State Domestic Product of Kerala as of 2019, after Ernakulam and Thiruvananthapuram. The district is divided into seven Taluks - Eranad, Kondotty, Nilambur, Perinthalmanna, Ponnani, Tirur, and Tirurangadi. Economically booming towns in Malappuram district include Malappuram, Manjeri, Perinthalmanna, Kottakkal, Nilambur, Tirur, Parappanangadi, Kondotty, Chemmad, Puthanathani, Valanchery, and Edappal.

Ernakulam, IPA: [erɐɳɐːguɭɐm]; IAST: Eṟaṇākuḷaṁ, in Malayalam: എറണാകുളം) is a district of Kerala, India, that takes its name from the eponymous city division in Kochi. It is situated in the central part of the state, spans an area of about 3,000 square kilometres (1,200 sq mi), and is home to over 9% of Kerala's population. Its headquarters are located at Kakkanad. The district includes Kochi, also known as the IT and commercial capital of Kerala, which is famous for its ancient Hindu temples, churches, and mosques. The district includes the largest metropolitan region of the state: Greater Cochin. Ernakulam is the district that yields the most revenue and the largest number of industries in the state. It contributes to around 60% of the annual state revenue, and is the third most populous district in Kerala, after Malappuram and Thiruvananthapuram. The district also hosts the highest number of international and domestic tourists in Kerala state.

Palakkad District, in the southeastern part of the former Malabar district, is one of the 14 districts of the South Indian state of Kerala. It is located right in the middle of the state. Also, it is the largest district in Kerala since 2006. The city of Palakkad is the district headquarters. Palakkad is bordered on the northwest by the Malappuram District, on the southwest by the Thrissur District, on the northeast by Nilgiris District, and on the east by Coimbatore district of Tamil Nadu. The district is nicknamed "the granary of Kerala". Palakkad is the gateway to Kerala due to the presence of the Palakkad Gap, in the Western Ghats. A significant Tamil-speaking population resides in the eastern area of Palakkad district. The total area of the district is 4,480 km2 (1,730 sq mi) which is 11.5% of the state's area which makes it the largest district of Kerala. Out of the total area of 4,480 km2 (1,730 sq mi), about 1,360 km2 (530 sq mi) of land is covered by forests. Most parts of the district fall in the midland region, except the Nelliampathy-Parambikulam area in the Chittur taluk in the south and Attappadi-Malampuzha area in the north, which are hilly and fall in the highland region.

Idukki (ഇടുക്കി), IPA: [iɖukːi], is a district in the Indian state of Kerala. It was constituted on 26 January 1972, by splitting the district of Kottayam into two parts. Its division was previously headquartered at Kottayam city, but moved to Kuyilimala near Painavu and Cheruthoni in June 1976. Idukki district lies amid the Western Ghats of Kerala.

Irikkur is a census town in Kannur District of Kerala state, India.

Kottayam, IPA: [koːʈːɐjɐm] is a city in the Indian state of Kerala. Kottayam literally means the interior of a fort "Kotta" meaning fort and "Akam" meaning inside. Flanked by the Western Ghats on the east and the Vembanad Lake and paddy fields of Kuttanad on the west, Kottayam is a place that is known for extraordinary qualities. It is the district headquarters of Kottayam district, located in south-west Kerala. Kottayam is located in the basin of the Meenachil River at an average elevation of 3 metres (9.8 ft) above sea level, and has a moderate climate. It is located 150 kilometres (93 mi) north of the state capital Thiruvananthapuram.

Ranni is a small village in the Pathanamthitta district of Kerala, in India. The taluk headquarters is a small township on both sides of the Pamba River. Ranni is also one of the largest taluks in Kerala. The renowned Hindu temple of Sabarimala is in this taluk, situated approximately 66 km from the main town, Ittiyappara. Ranni is known for its natural environment, forests, hills, river and good climate.

Chittar is a village in Pathanamthitta district, located in Kerala state, India. It is a Panchayat and is situated in the Ranni Taluk and in Konni constituency in Pathanamthitta District. It is located 29km away from Pathanamthitta town at its east. Nearby Panchayats are Seethathodu, Perunad, Vadaserikkara and Thannithodu. Chittar was formerly represented in the Ranni legislative assembly, but now in Konni assembly. Its previous parliament constituency was Idukki. Chittar was given the Nirmal Gram award from former president Pratibha Patil.

Kuttampuzha is a gram panchayat in Ernakulam district in the Indian state of Kerala. Situated 71km east of Kochi, Kuttampuzha panchayat is home to the 17.7% of total area of the Ernakulam District. 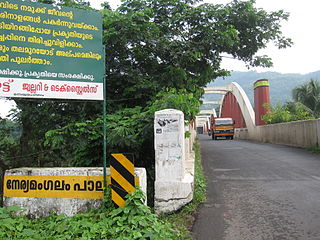 Neriamangalam is a village in Ernakulam district in the Indian state of Kerala. Neriamangalam is on the banks of Periyar River. It is on the border of Ernakulam and Idukki districts. Agriculture is the predominant occupation in this area. The Neriamangalam Bridge, Ranikallu etc. are of historical importance. The Neriamangalam Bridge, built across the Periyar river, is often referred as 'The Gateway to the Highranges' as it is on the way to the higher regions of Idukki district, especially Munnar. The bridge was made by the Maharaja of Travancore in 1935. Now the bridge is a part of National Highway 49 which leads to Dhanushkodi in Tamil Nadu. The St Joseph's church, Neriamangalam is a major place of worship for Syro-Malabar Christians of this region. The Jawahar Navodaya Vidyalaya, Neriamangalam is an important educational institution in this region. Neriamangalam gets one of the highest average rainfall in the state of Kerala. So this place is aptly hailed as 'The Cherrapunjee of Kerala'. The nearest town is Kothamangalam, which is about 17.6 km (11 mi) from Neriamangalam.

Konnithazham is a village in Pathanamthitta district in the state of Kerala, India. Located on the route from Konni to Kumbazha via Attachackal, Konnithazham is knownn for its secular harmpny of people.

Chadchan is a taluq in the southern state of Karnataka, India. It is located in Vijayapura district in northern part of Karnataka.

The population of Kerala, India is a heterogenous group that comprises many ethnic groups that originated in other parts of India as well as the world, with distinctive cultural and religious traditions. While the majority of Keralites speak the Malayalam language, various ethnic groups may speak other languages as well.

Iravon is a village in Konni taluk, Pathanamthitta district in the state of Kerala, India.Located near the banks of Achankovil river. Rubber cultivation is a major source of income for the local population. Iravon borders Konni reserved forest area. Topography of the region is hilly.

Devarmala is a huge peak in the Western Ghats of Kerala and Tamil Nadu. Devarmala stands at an altitude of 1,923m. It is located in the border of Pathanamthitta District and Kollam District of Kerala and the adjacent Thirunelveli District of Tamil Nadu. This is the last of the peaks located just north of the biogeographically important seven kilometers wide "Schencottah Pass" or "Schencottah Gap" or 'Aryankavu Pass'.