Perumpetty is a village in Pathanamthitta district in the state of Kerala, India. [1]

As of 2001 [update] India census, Perumpetty had a population of 14581 with 6978 males and 7603 females. [1] Perumpetty is a village under Mallappally Taluk in Pathanamthitta district, in the state of Kerala, India. Rubber plantations are a major source of income for the local population.

Ayiroor is a village located in the western part of Ranni taluk, in the Pathanamthitta district in Kerala state, India. It is bordered by hills and located near the Western Ghats. Ayiroor was previously part of Tiruvalla taluk in Alleppey district and is considered part of the Edanadu region in Kerala. The Pamba River flows on the southern side of the village, making the soil around the village very fertile. 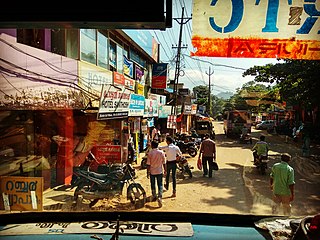 VITHURA is a town VITHURA 36 km from Thiruvananthapuram, capital of the Kerala state in India. Vithura is the crossroads to various tourist, cultural, and religious centres. Surrounded by the Western Ghats (Sahyadri), Vithura is a prime tourist spot. The Village is rich with scenic beauty and good climate. The campus for the Indian Institute of Science Education and Research, Thiruvananthapuram is being constructed here.

Karukachal is a fast-growing town in Changanassery Taluk in Kottayam district of Kerala state in India. The name "Karukachal" was coined from the words "Karuka"(Karukapullu in Malayalam) which is a type of grass which grew in plenty and "chal" meaning a small body of flowing water. Karukachal in Changanacherry-Vazhoor Road which is almost a century old.

Pandalam is a place in Kerala, India. Pandalam is considered a holy town due to its connection with Lord Ayyappa and Sabarimala. Rightly recognised as the educational and cultural headquarters of Central Travancore, Pandalam hosts educational institutions ranging from reputed schools to post graduate, training, ayurveda, and engineering colleges. There are seven colleges and 23 schools at Pandalam, including N. S. S. College, Pandalam. The Kerala state government plans to make the place a special Township, by including the Pandalam municipality and Kulanada panchayat..The Pandalam urban area consists of Pandalam municipality, Kulanada panchayath, Pandalam Thekkekara panchayath & Thumpamon panchayath. 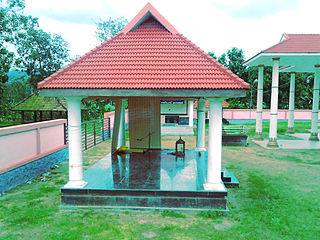 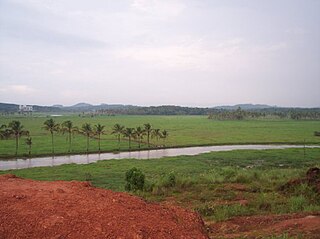 Thadiyoor is a place located in Ayroor(Ayiroor) village of Pathanamthitta district, Kerala, India, approximately 18 kilometres (11 mi) from Tiruvalla and 9 kilometres (5.6 mi) from Ranni.

Othara or Othera is an Indian village in Kerala state. It is located near Tiruvalla, in Pathanamthitta district 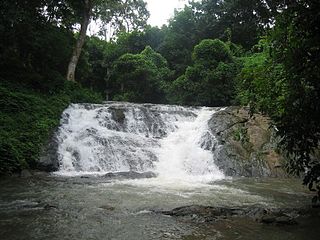 Angadical is a village in Pathanamthitta district in the Indian state of Kerala.

Enadimangalam is a village in the Pathanamthitta district of the state of Kerala, India.

Peringara is a village in Thiruvalla Taluk of Pathanamthitta district in the state of Kerala. It lies at a distance of around 4 kilometres from Thiruvalla Town. India.

Chathenkary is a village in Upper Kuttanadu division Pathanamthitta district in the state of Kerala, India.

Arukalickal is a small Village/hamlet in Parakode block in Pathanamthitta District of Kerala State, India. It comes under Ezhamkulam Panchayath. It belongs to South Kerala Division. It is located 15km south of the district headquarters Pathanamthitta, 1km from Parakode, and 89km from the state capital Thiruvananthapuram.