Last updated September 18, 2020
This article is about the city in Pathanamthitta. For other uses, see Pandalam (disambiguation).
Municipality in Kerala, India

Pandalam is a municipal town in Kerala, India. Pandalam is considered a holy town due to its connection with Lord Ayyappa and Sabarimala. Rightly recognised as the educational and cultural headquarters of Central Travancore, Pandalam hosts educational institutions ranging from reputed schools to post graduate, training, ayurveda, [2] and engineering colleges. There are seven colleges and 23 schools at Pandalam, including N. S. S. College, Pandalam. The Kerala state government plans to make the place a special Township, [3] by including the Pandalam municipality and Kulanada panchayat. [4]

The centuries-old Kurunthottayam market (now known as the Pandalam market) is one among the largest agricultural markets in central Travancore. Kerala's widest suspension bridge was constructed in Pandalam over the Achankovil river. [5] The bridge is 70 metres long and 2.5 metres wide. [5]

According to legend, Lord Ayyappan, the presiding deity of Sabarimala, had his human sojourn at Pandalam as the adopted son of the King of Pandalam. [6] [7] During Sabarimala pilgrimage season, devotees come to Pandalam in large numbers to worship the deity of Valiyakoikkal Temple near the Pandalam Palace. [8] [9] This temple is on the banks of river Achenkovil. Three days prior to the Makaravilakku festival, the Thiruvabharanam (sacred ornaments) are taken in a procession from Pandalam to Sabarimala. [10]

It is believed that the Pandya kings of Tamil Nadu fled to Pandalam in the face of an attack from Cholas [11] and settled there in the land they bought from Kaipuzha Thampan, a landlord. The Pandya dynasty had provinces on either sides of the Western Ghats. The King of Pandalam helped Marthanda Varma to conquer the Kayamkulam province. In return for this help, Marthanda Varma did not attempt to attack and conquer Pandalam during the expansion of his kingdom. The princely state of Pandalam had extended up to Thodupuzha in Idukki district once. Pandalam was added to Travancore in 1820. Before the formation of Pathanamthitta district, Pandalam was in Mavelikara taluk of Alappuzha district.

Pandalam Suspension Bridge, is a pedestrian suspension bridge in Pandalam, that connects Pandalam with Kulanada. [14]

Pandalam Palace, placed on the banks of Achankovil river, was home to the royal family of Pandalam.The royal family of this palace enjoys a significant position in the history of Kerala. It is believed that they have descended from the Pandya kings of Madurai. Pandalam Palace carries not just historical importance, but a considerable religious magnitude as well. According to legends, Lord Ayyappa was born to the King of Pandalam.There is a temple on the banks of Achankovil river which is dedicated to Lord Ayyappa. The sacred ornaments of Lord Ayyappa are carried from Pandalam Palace to Sabarimala as a grand procession three days prior to the makaravilakku festival. 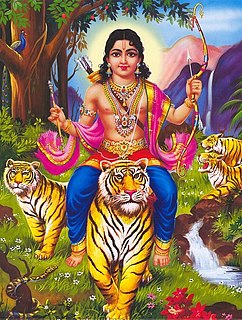 Ayyappan is a Hindu deity, particularly popular in the South Indian state of Kerala. Although devotion to Ayyappan has been prevalent in Kerala for hundreds of years, in the rest of South India, it has become popular only in the late 20th century. According to Hindu theology, he is the son of Harihara and Shiva. Ayyappan is also referred to as Ayyappa, Sastavu, Hariharasudhan, Manikantan, Shasta or Dharma Shasta and sabri. 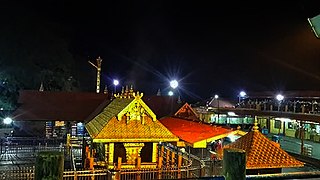 Makaravilakku is an annual festival held on Makar Sankranti in Kerala, India at the shrine of Sabarimala. The festival includes the Thiruvabharanam procession and a congregation at the hill shrine of Sabarimala. An estimated half a million devotees flow to Sabarimala every year to have a darshan (vision) of this ritual this day.

Valiakoikkal Temple is the family temple of the Pandalam Royal Family. The temple is located at Pandalam in Pathanamthitta District, Kerala. It is situated within the Pandalam Palace premises. The main deity is Ayyappan. Procession of the Thiruvabharanam towards Sabarimala shrine starts from the Valiyakoikkal temple every year before the Makaravilakku festival. Millions of devotees visit this temple every year during the Makaravilakku festive season. 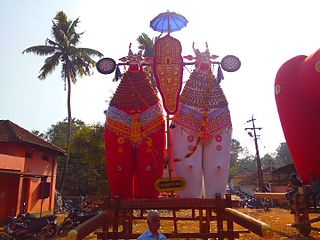 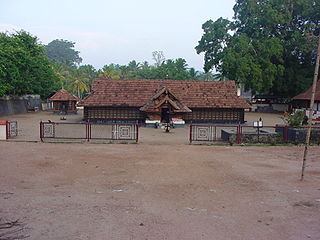 Kulathupuzha Sastha Temple is a Hindu temple located on the banks of Kulathupuzha river, a tributary of Kallada River. It is located in Kulathupuzha in Pathanapuram tehsil of Kollam district in the Indian state of Kerala. The presiding deity there is Lord Ayyappa in the form of Balasastha. It is also one among the pancha sastha shrines and one of the 108 Sastha shrines in Kerala. The idol there is believed to be installed by Lord Parashurama, and is made up of eight pieces of stones.

Poonjar dynasty was one of the royal dynasties in medieval Kerala descended from the Pandya kings of Madurai. History has it that Manavikrama Kulasekara Perumal, a Pandya king as the sole founder of the dynasty. It was a minor principality in the central Travancore region which covered the parts of present-day Dindigul, Cumbum, Kudallor, Bodinayakkanur, Vandiperiyar, Peerumedu and Kannan Devan hills.

Achankovil Sastha Temple is a Hindu temple and one of the 108 Sasthalayas, located in Pathanapuram tehsil of Kollam district in the Indian state of Kerala. It is also one among the famed Pancha Sastha temples in Kerala, the other four being Kulathupuzha, Aryankavu, Sabarimala and Kanthamala temples. The temple is near the origin of the famous Achankovil river, named after the locality.

Pandalam Suspension Bridge is a pedestrian suspension bridge which crosses the Achankovil River in the state of Kerala, India. It connects Ayyappa Temple with Kaippuzha Sreekrishna Temple.