Three Island Crossing State Park is a history-focused public recreation area in Glenns Ferry, Elmore County, Idaho, United States, that interprets the site of a ford of the Snake River on the Oregon Trail. The state park features camping, cabins, disk golf, and a visitors center with interpretive exhibits. [1]

The site was used as a river crossing until 1869 when Gus Glenn built a ferry across the river about 2 miles (3.2 km) upstream. [1] The land was deeded from the city of Glenns Ferry to the Idaho Department of Parks and Recreation in 1968 and was formally opened to the public as a state park in 1971. [2] 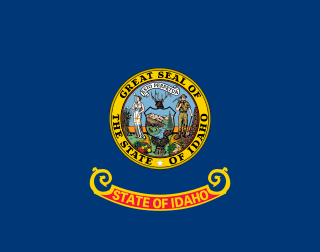 Idaho Falls is a city in and the county seat of Bonneville County, Idaho, United States, and the state's largest city outside the Boise metropolitan area. As of the 2010 census, the population of Idaho Falls was 56,813, with a metro population of 133,265.

Glenns Ferry is a city in Elmore County, Idaho, United States. The population was 1,319 at the 2010 census. The city is adjacent to Interstate 84 and the Snake River. 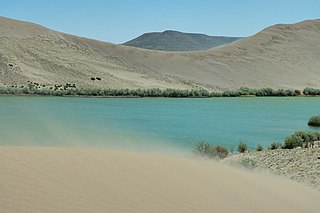 Bruneau Dunes State Park is a public recreation and geologic preservation area featuring large sand dunes and small lakes, located northeast of Bruneau and fifteen miles (24 km) south of Mountain Home, Idaho. The state park is the site of North America's highest single-structured sand dune which is approximately 470 feet (140 m) high. The park encompasses 4,800 acres (1,900 ha) and features the Bruneau Dunes Observatory, where visitors can use a telescope for stargazing.

Hells Gate State Park is a public recreation area located on the southern edge of Lewiston, Idaho, at the Snake River's downstream entrance to Hells Canyon, the deepest canyon in North America. The state park was created by the U.S. Army Corps of Engineers to mitigate the construction of the Lower Granite Dam; the Idaho Department of Parks and Recreation began leasing the site in 1973. The park's 960 acres (390 ha) offer trails for hiking, mountain biking, and horseback riding as well as opportunities for camping, picnicking, fishing, boating, swimming, and taking jet boat trips into the canyon. The park sits at the lowest elevation of any Idaho state park, at 733 feet (223 m) above sea level. 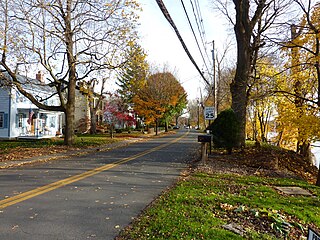 Titusville is an unincorporated community located within Hopewell Township in Mercer County, New Jersey, United States. The area includes a post office with its own ZIP code (08560), a small village of homes, and a large park dedicated to George Washington's crossing of the Delaware River in 1776. Titusville was added to the National Register of Historic Places in 1983.

Eagle Island State Park is a public recreation area on the southwest outskirts of the city of Eagle, Idaho. The state park covers 545 acres (221 ha) that are bordered by the north and south channels of the Boise River. The park's recreational facilities include swimming beach, picnic area, equestrian trails, and a water slide.

Historic ferries in Oregon are water transport ferries that operated in Oregon Country, Oregon Territory, and the state of Oregon, United States. These ferries allowed people to cross bodies of water, mainly rivers such as the Willamette in the Willamette Valley, and the Columbia, in order to transport goods, move people, and further communications until permanent bridges were built to allow faster crossing of the water. The early ferries were used by wagons and pedestrians, while later ones transported trains and then automobiles. Oregon has a few automobile ferries still in operation. 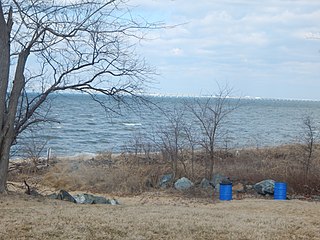 Matapeake State Park is a public recreation area on Chesapeake Bay occupying the site of a former ferry landing in Matapeake, Kent Island, Maryland. The landing served the state-owned Chesapeake Bay Ferry System before the Chesapeake Bay Bridge opened. The park is leased and managed by Queen Anne's County.

Harriman State Park is a public recreation area located on the 11,000-acre (4,500 ha) Harriman Wildlife Refuge in Fremont County, three miles (4.8 km) south of Island Park in eastern Idaho, United States. The state park is within the Henry's Fork Caldera in the Greater Yellowstone Ecosystem. It is home to an abundance of elk, moose, sandhill cranes, trumpeter swans, and the occasional black or grizzly bear. Two-thirds of the trumpeter swans that winter in the contiguous United States spend the season in Harriman State Park. 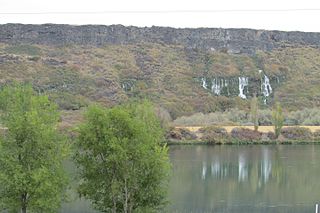 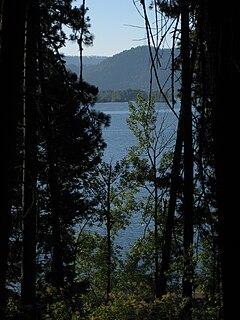 Heyburn State Park is a public recreation area in the U.S. state of Idaho. It is located almost entirely in Benewah County, with a small portion extending into southern Kootenai County. The park was founded in 1908 and is the oldest state or provincial park in the Pacific Northwest. The park has 5,744 acres (23.2 km2) of land and 2,332 acres (9.4 km2) of water on three lakes: Benewah, Chatcolet, and Hidden. A dam constructed on the Spokane River in Post Falls in 1906 raised the level of Lake Coeur d'Alene, connecting it to the park's three lakes. The surface elevation of the lakes is 2,125 feet (648 m) above sea level. The park's year-round recreational opportunities include camping, boating, hiking, horseback riding, fishing, and picnicking. 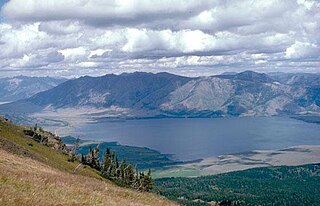 Lucky Peak State Park is a public recreation area covering a total of 240 acres (97 ha) on and near Lucky Peak Lake approximately ten miles (16 km) east of Boise in Ada County, Idaho. The state park has three units: Discovery Park off State Highway 21, a roadside park for picnicking and fishing in the Boise River; Sandy Point at the base of the Lucky Peak Dam, with sandy beach and calm waters for wading and swimming; and the Spring Shores unit with boat ramps and marina at the northern end of the lake. The park was created in 1956 by agreement with the United States Army Corps of Engineers, following completion of the Lucky Peak Dam.

Land of the Yankee Fork State Park is a history-oriented public recreation area covering 521 acres (211 ha) in Custer County, Idaho, United States. The state park interprets Idaho's frontier mining history, including the ghost towns Bayhorse, Bonanza, and Custer. The interpretive center near Challis has a museum and gold panning station. The park was created in 1990 with the purchase of twenty acres where the interpretive center is located two miles south of Challis. It is operated by the Idaho Department of Parks and Recreation in cooperation with the United States Forest Service.

Round Lake State Park is a public recreation area located four miles (6.4 km) southwest of Sagle in Bonner County, Idaho. The 142-acre (57 ha) state park surrounds 123-acre (50 ha) Round Lake. The lake was formed from glacial activity in the Pleistocene. The park offers campsites, fishing, swimming, boating for non-motorized and electric-powered watercraft, and trails for hiking, biking and skiing.

The Idaho Department of Parks and Recreation (IDPR) is a State of Idaho governmental organization that manages state parks throughout Idaho as well as the registration programs for boats, snowmobiles and other off-highway vehicles. The department's mission statement is "to improve the quality of life in Idaho through outdoor recreation and resource stewardship." The department has the dual duty of "protecting and preserving the resources of the state park system and of providing recreation opportunities and facilities for public use." The park system has four classifications: natural parks, which preserve significant natural resources; recreation parks, which offer opportunities for outdoor activities; heritage parks, which preserve and interpret sites of cultural importance; and recreation trailways. As of 2018, IDPR managed 27 state parks, a count that includes the state-managed City of Rocks National Reserve.