Thrikkavu Sri Durga Bhagavathy Temple is an ancient Temple situated in Ponnani, Malapuram District, Kerala State, India. Goddess Durga is the main deity of this centuries old temple. Even though authentic details are not available about the age of the temple, it is considered one of the 108 Durga temples consecrated by Lord Parasurama in kerala. It is believed that the name Thrikkavu originated from "Thrikkani Kaadu ". The devastation caused by Tipu Sultan to the ancient and holy temples of Keraladheeswaram, Thrikkandiyoor and Thriprangatu in Vettum region was terrible. [1] The Zamorin renovated these temples to some extent. The famous and ancient Thirunavaya Temple, known throughout the country as an ancient teaching-centre of the Vedas, revered by the devotees of Vishnu from Tamil Nadu, and existing before the advent of Christ, was also plundered and destroyed by Tipu's army (Malabar Gazetteer). After dismantling and destroying the idol, Tipu converted the Thrikkavu Temple into an ammunition depot in Ponnani (Malabar Manual). It was the Zamorin who repaired the temple later.

The Devi is here in her Chathurbhaahu (four arms) form with Chakra (disc), Sankha (conch), Varada (in a boon-conferring pose) and katibadha (arm rest in the hip). Thrikkavu Bhagavathy is believed to be "Sarvabeeshtapradhayini" (one who grants all wishes) and numerous bhakthas have stories legion to tell of her supreme benevolence. The Bhagavathy is worshipped in three different forms: Parvati, Lakshmi and Saraswati.

Apart from the main deity, the temple complex consists of Krishna temple and Upa-Devatha temples for Mahaganapathi, Sasthavu, Sidhi Vinayakan, Hanuman and Brahma Rakshass. There is Moola Ganapathy Temple near the pond (Kshetrakulam) along with Naga Raja, Naga Yakshi and Naga pratishtas

The main festival is Navarathri Mahotsavam which attracts large number of devotees. Vidyarambham (beginning of formal education) is conducted on the Vijayadasami day of Navarathri utsavam. Thousands of children throng this temple on that day. The Vrishchicka Mandala mahotsavam (festival) is celebrated during the entire period of mandalam season. 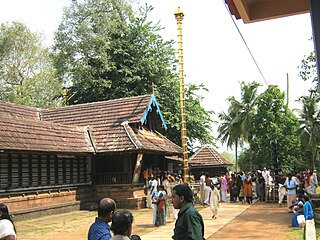 Azhakodi Devi Temple is a Hindu temple in Thiruthiyadu, Thiruthiyadu, Kozhikode, Kerala, India. It is about 1.5 km away from the Mofussil bus stand and 2.5 km from the KSRTC Bus stand in the Kozhikode city.

Tanur is a coastal town, a municipality, and a block located in Tirur Taluk, Malappuram district, Kerala, India. It is located on the Malabar Coast, 9 kilometres (5.6 mi) north of Tirur and 9 kilometres south of Parappanangadi. It is the 17th-most populated municipality in the state, the fourth-most populated municipality in the district, and the second-most densely populated municipality in Malappuram district, having about 3,568 residents per square kilometre as of the year 2011. Tanur town is located south of the estuary of Poorappuzha River, which is a tributary of Kadalundi River. Tanur was one of the major ports in the southwestern coast of India during the medieval period. It was ruled by the Kingdom of Tanur, also known as Vettathunadu, who were vassals to the Zamorin of Calicut. In the early medieval period, under the chiefs of Kozhikode and Tanur, Tanur developed as one of the important maritime trade centre on the Malabar Coast. Later it became a part of Vettathunadu Taluk in Malabar District under British Raj, which was merged with the Ponnani taluk in 1860-1861. Tanur railway station is a part of the oldest Railway line of Kerala laid in 1861 from Tirur to Chaliyam. Presently, the status of Tanur is reduced to a major fishing centre in Kerala.

Dharma RajaKarthika Thirunal Rama Varma was the Maharajah of Travancore from 1758 until his death in 1798. He succeeded his uncle Marthanda Varma, who is credited with the title of "maker of modern Travancore". During his reign Dharma Raja not only retained all the territories his predecessor had gained but administered the kingdom with success. He was addressed as Dharma Raja on account of his strict adherence to Dharma Sastra, the Hindu principles of justice by providing asylum to thousands of Hindus and Christians fleeing Malabar during the Mysorean conquest of Malabar. 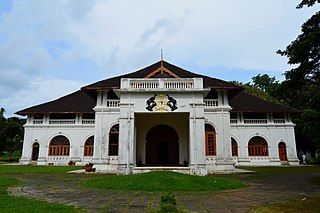 Shakthan Thampuran Palace is situated in City of Thrissur in Kerala state, India. It is named as Vadakkekara Palace, was reconstructed in Kerala-Dutch style in 1795 by Ramavarma Thampuran of the erstwhile Princely State of Cochin, well as Sakthan Thampuran is preserved by Archaeological Department. The palace was converted into a museum in 2005 by State. 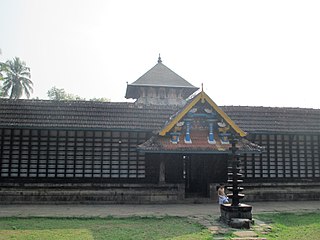 Thiruvangad Sree Ramaswami temple is an important temple located in the east part of Thalassery. The temple is generally known as the Brass Pagoda from the copper sheeting of its roof. A part of the temple was damaged by Tipu Sultan's troops in the 18th century, but the temple itself is believed to have been saved from destruction. It was one of the outposts of the Thalassery fort in the eighteenth century. In its precincts, were held many conferences between the officials of the East India Company and local leaders, at which political treaties and agreements were signed. The temple contains some interesting sculptures and lithic records. The annual festival of the temple commences on Vishu day in Medam (April–May) and lasts for seven days. 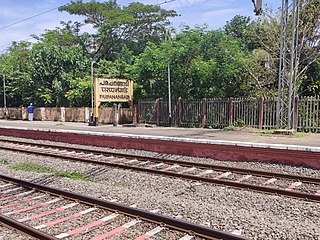 The Mysorean invasion of Malabar was the military invasion of the Malabar region of Kerala, including the territories of the Zamorin of Calicut, by the then-de facto ruler of the Kingdom of Mysore, Hyder Ali. After the invasion, the Kingdom of Cochin to the south of Malabar became a tributary state of Mysore.

Ravi Varma Raja (1745–1793) was a Samantan Nair warrior prince of the Royal House of Zamorins from Calicut who fought a two-decade long revolt against the Mysore Sultanate under Hyder Ali and Tipu Sultan between 1766–1768 and 1774–1791, and later the British East India Company in 1793.

The Mukkolakkal BhagawathiTemple is a famous temple of the Hindu mother goddess Bhagawati. One of the renowned Goddess Temples in Kerala, Sree Varaham Mukkolackal Bhagavathi Temple is situated at Sreevaraham, on the south-east of Sree Padmanabha Swamy Temple in Thiruvananthapuram. The temple is situated on the south of the famous Sreevaraham Lakshmi Varaha Temple. 'Ooruttu Mahotsavam', the annual religious festival of the temple, is conducted in March - April every year.

Manikandeswaram Uma Maheswara temple is a Hindu temple dedicated to Shiva and Parvati, in Vadakkekad, Thrissur district, Kerala, India. Believed to be more than two thousand years old, this is one of the oldest temples in India. It is also one of the rare temples where Shiva and Parvati reside in the same sanctum sanctorum (sreekovil) with Ganapati right outside. The concept is that of Shiva holding Parvati with his left palm while Ganapati is sitting on Parvati's lap.

Sree Perunthatta Siva Temple is an ancient Hindu temple dedicated to Lord Shiva is situated in Guruvayur of Thrissur District in Kerala state in India. According to folklore, sage Parashurama has installed the idol of Lord Shiva in the Treta Yuga. The temple is a part of the 108 famous Shiva temples in Kerala. Therefore, the Saiva-Vaishnava glow is a holy abode.

Reference from the article "Religious Intolerance of Tippu Sultan" by LATE P.C.N. RAJA-"After dismantling and destroying the idol, Tipu converted the Thrikkavu Temple into an ammunition depot in Ponnani (Malabar Manual of William Logan). It was the Zamorin who repaired the temple later."