Thyrsostachys siamensis is one of two bamboo species belonging to the genus Thyrsostachys . It grows up to 7 to 13m tall. It is native to Yunnan, Myanmar, Laos, Thailand, Vietnam and naturalised in Sri Lanka, Bangladesh, Malaysia. The plant is also known as long-sheath bamboo, monastery bamboo, Thai bamboo, Thai umbrella bamboo, umbrella bamboo, and umbrella-handle bamboo.

Culm is bright green when young, which becomes yellowish green in mature and turns yellowish brown when drying. Young shoots are purplish green in color. Culm is straight. Branching only at top. Aerial roots absent. Internode length is 15–30 cm, and diameter is 3–8 cm. Culm walls are very thick which is almost solid with a very small lumen. Node prominent.

Thyrsostachys is a genus of Chinese and Indochinese bamboo in the grass family. 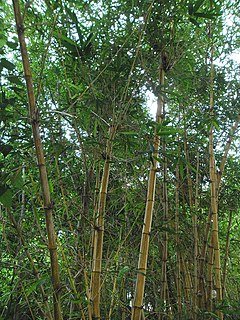 Bambusa vulgaris, common bamboo, is an open-clump type bamboo species. It is native to Indochina and to the province of Yunnan in southern China, but it has been widely cultivated in many other places and has become naturalized in several. Among bamboo species, it is one of the largest and most easily recognized.

Arundinaria appalachiana, commonly known as hill cane, is a woody bamboo native to the Appalachian Mountains in the southeastern United States. The plant was elevated to the species level in 2006 based on new morphological and genetic information and was previously treated as a variety of Arundinaria tecta. As a relatively small member of its genus, it usually only attains heights of 0.5 to 1.0 metre with an either dense or diffuse habit. It is one of only three temperate species of bamboo native to North America. Hill cane is common on dry to mesic sites on upland slopes, bluffs and ridges in oak-hickory forests. In contrast to its sympatric relatives, Arundinaria gigantea typically appears along perennial streams, while A. tecta is found in swamps and other very wet areas.

Bambusa tulda, or Indian timber bamboo, is considered to be one of the most useful of bamboo species. It is native to the Indian subcontinent, Indochina, Tibet, and Yunnan, and naturalized in Iraq, Puerto Rico, and parts of South America.

Phyllostachys rubromarginata, the reddish bamboo or red margin bamboo, is a species of Phyllostachys bamboo, native to Central China, specifically Guangxi and Guizhou.

Bambusa lako, known as Timor black bamboo, is a large species of bamboo originating from the island of Timor; its black culms may reach 21 m (69 ft) in height. A 2000 molecular study places it as closely related to the similar Indonesian species Gigantochloa atroviolacea, from which it was separated in 1997; it may soon be placed in that genus. Bambusa lako can only be grown in climates that are mostly frost free. 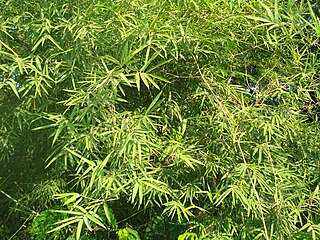 Ekmanochloa is a genus of plants in the grass family. endemic to Cuba.

Engleromyces sinensis is a species of fungus in the family Xylariaceae. It was described as new to science in 2010, based on specimens collected in 1958 and incorrectly identified as Engleromyces goetzii. The fungus is known only from China, where it grows on bamboo culms. It forms fruit bodies in the shape of two roughly circular buff-colored lobes measuring up to 50 cm (20 in) in diameter that envelop the bamboo. E. sinensis has been used as a folk remedy against cancer and infection in Tibet, Yunnan, and Sichuan Provinces. Several bioactive metabolites have been isolated and identified from the fungus.

Dendrocalamus asper, also known as giant bamboo, or dragon bamboo, is a giant tropical, dense-clumping species native to Southeast Asia. Due to its common occurrence across Asia and its attractive features as well as ease of harvesting, this species has been introduced widely across Latin America and Africa. It is a sympodial or clumping bamboo that does not show lateral growth and therefore has no invasive properties. 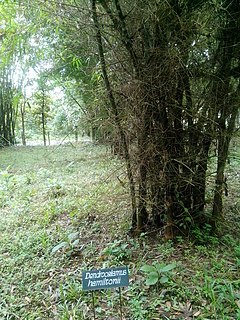 Dendrocalamus hamiltonii, or Hamilton's bamboo, is a species of bamboo, 12–15 cm in diameter and growing up to 15–18 m in height, found in South Asian countries such as, India, Sri Lanka, Bhutan, Nepal, Pakistan, and far eastern China.

Dendrocalamus giganteus, also known as dragon bamboo or one of several species called giant bamboo, is a giant tropical and subtropical, dense-clumping species native to Southeast Asia. It is one of the largest bamboo species in the world.

The Ceylon reed-bamboo,, also known as Reed bamboo, and Forest bamboo, is a species of bamboo in the grass family). It is endemic to Sri Lanka. It can be found extensively in Ratnapura and Kegalle districts, in waste lands of rainforest and also along stream banks and I in forest gaps.

The black bamboo is a species of tropical Asian, Australian, and Papuasian genus of bamboos in the grass family.

Dendrocalamus longispathus, the long-sheath bamboo, is a bamboo species which grows up to 20 m tall. It is native to Bangladesh, Myanmar, and Thailand. It has now become an exotic species all over the South Asia. 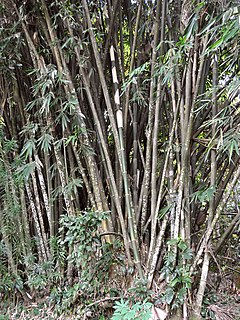 Gigantochloa atter, the black bamboo, sweet bamboo, or giant atter, is a bamboo species belonging to the genus Gigantochloa. It grows up to 20 m tall. It is native to India, Malaysia and Indonesia. It has now become an exotic species all over the South Asia.

The Chittagong forest bamboo,, is one of two bamboo species belonging to the Melocanna genus. It grows up to 10–25 m tall. It is native to Bangladesh, Myanmar, India, and Thailand.

Bambusa barpatharica is a species of Bambusa bamboo.