Ticehurst is both a village and a large civil parish in the Rother district of East Sussex, England. The parish lies in the upper reaches of both the Bewl stream before it enters Bewl Water and in the upper reaches of the River Rother flowing to the south-east. The parish includes the parish wards of Ticehurst, Flimwell and Stonegate. [3] The linear settlements of Berner's Hill and Union Street lie between Ticehurst and Flimwell. It lies to the south-east of Tunbridge Wells, and is about ten miles (16 km) distant.

Ticehurst is not mentioned in the Domesday Book ; the manor came into being in the 14th century. Pashley Manor [4] is also mentioned at the same time, and is within the parish. [5]

The village's name derives from Old English; there are two possible derivations. The most plausible one is that it means wood on the Teise from the river; the second roughly translates as 'The wooded hill where young goats graze', ticce(n) + hyrst. [6] (1248, Tycheherst) [7]

Ticehurst is part of the electoral ward called Ticehurst and Etchingham. The population of this ward at the 2011 census was 4,679. [8]

There is an active village club, which runs regular social events, and a monthly newsletter "News & Views" which is produced by a team of volunteers. The village school serves both Ticehurst and Flimwell. [9] There is also a comprehensive website covering most of the activities in the community.

From 1974 to July 2018 the village was home to the headquarters of the Antiquarian Horological Society, at New House, on the village square.

The village is also home to the first pick-your-own fruit farm to open in Britain,[ citation needed ] Maynard's Fruit Farm, made The Times "Top 50 places to eat outside in Britain" list. [11] Outside the village there are dairies at Northiam and Stonegate, a bakery at Bodiam, family butcher in Etchingham, a smokery in Flimwell and two more pubs at Three Leg Cross and Dale Hill.

One claim to fame is that the Scottish singer/guitarist Bert Jansch lived in Ticehurst in the late 1960s and recorded tracks for his 1971 Rosemary Lane album in his house in the village. [12] Ticehurst was also the final residence of Evelyn Waugh's first wife, Evelyn Nightingale. [13] The village church, St Mary's, was the venue for the wedding of her son, the journalist and theatre critic Benedict Nightingale, to the author Anne Redmon. [14]

Pashley Manor Gardens is promoted by the Historic Houses Association and by the Campaign to Protect Rural England. [15] The gardens hold an annual tulip festival each spring. The event in 2016, between 22 April and 7 May, has 30,000 tulips, with over 100 varieties. [16]

The village is linear in shape and is the largest of a group of settlements. Some of which contain some large residential properties, to both west and east of the main road. Other settlements are Union Street and Dale Hill to the west, and Seacox Heath to the east. Including the surrounding woods and fields, Flimwell covers an area of approximately 860 acres (350 ha), of which approximately 5% is built-up.

South-east from Ticehurst and due north-east from Burwash, is the small village of Stonegate. [17]

It came into being at the same time as the railway line from Tunbridge Wells. The station at Stonegate has hourly train services to London (Charing Cross and Cannon Street) and to Hastings. The next stop from Stonegate to London is Wadhurst and towards Hastings is Etchingham.

In Stonegate, there is a Church of England primary school, and the Anglican parish church of St Peter. [18]

The three village churches are:

There is a railway station nearby, at Stonegate (until 1947 it was called Ticehurst Road; and before that Witherenden); and there is a bus link to Wadhurst railway station.

Lamberhurst ( is a village and civil parish in the borough of Tunbridge Wells in Kent, England. The parish contains the hamlets of The Down and Hook Green. At the 2001 Census it had a population of 1,491, increasing to 1,706 at the 2011 Census. 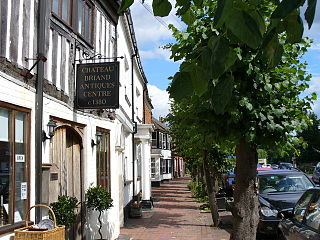 Burwash, archaically known as Burghersh, is a rural village and civil parish in the Rother district of East Sussex, England. Situated in the High Weald of Sussex some 15 miles (24 km) inland from the port of Hastings, it is located five miles (8 km) south-west of Hurst Green, on the A265 road, and on the River Dudwell, a tributary of the River Rother. In an area steeped in history, some nine miles (14 km) to the south-east lies Battle Abbey and eight miles (13 km) to the east is Bodiam Castle.

Bexhill and Battle is a constituency represented in the House of Commons of the UK Parliament since 2015 by Huw Merriman of the Conservative Party. 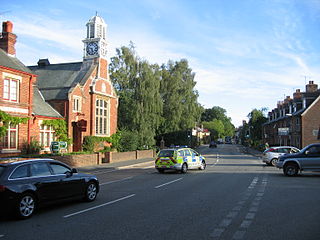 Hurst Green is a village and civil parish in the Rother district of East Sussex, England, and is located south of the East Sussex / Kent border at Flimwell. 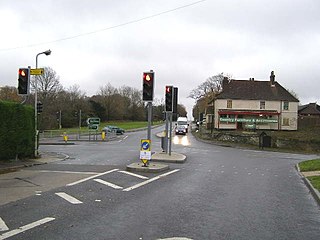 Flimwell is a village in the civil parish of Ticehurst, in the Rother district of East Sussex, England. It is located close to the border with Kent at the junction of the A21 road with the A268 and the B2087. The village is situated in an Area of Outstanding Natural Beauty near Bewl Water and Bedgebury Pinetum, and neighbouring villages include Ticehurst, Hurst Green and Hawkhurst.

Etchingham is a village and civil parish in the Rother district of East Sussex in southern England. The village is located approximately 15 miles (24 km) southeast of Royal Tunbridge Wells in Kent and 13 miles (21 km) northwest of Hastings, on the A265, half a mile west of its junction with the A21.

Catsfield is a village and civil parish in the Rother district of East Sussex, England. It is located six miles (9.7 km) north of Bexhill, and three miles (5 km) southwest of Battle.

Tidebrook is a hamlet within the parish of Wadhurst in East Sussex, England. It is located between the villages of Mayfield and Wadhurst. The brook for which the hamlet is named rises in the valley and forms one of the sources of the River Rother which meets the sea at Rye. 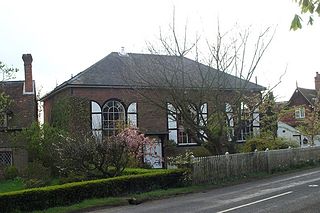 Shover's Green Baptist Chapel is a former Strict Baptist place of worship in the hamlet of Shover's Green in East Sussex, England. Shover's Green is in Wealden, one of six local government districts in the English county of East Sussex, and stands on the road between the market town of Wadhurst and the village of Ticehurst in the neighbouring district of Rother. Founded by Strict Baptists from nearby Burwash in 1816, the chapel—one of three Baptist places of worship in Wadhurst parish—continued to serve the community until the 1970s, when it was sold for conversion to a house. Its design is similar to that of the nearby Rehoboth Chapel at Pell Green. The chapel is protected as a Grade II Listed building. 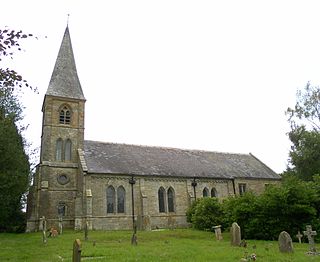 St Augustine's Church is the Anglican parish church of Flimwell, a village in the Rother district of East Sussex, England. It was consecrated in 1839 after architect Decimus Burton had built the nave and tower, which was then topped with a spire in 1873. The building was extended six years later by the addition of a chancel. The church has grade II listed building status. 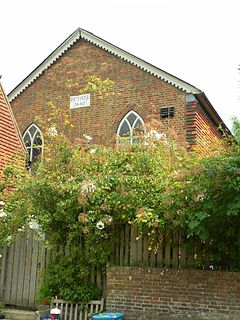 Bethel Strict Baptist Chapel is a former place of worship for Strict Baptists in Robertsbridge, a village in the district of Rother in the English county of East Sussex. Partly hidden behind ancient buildings on the village High Street, the simple brick chapel was erected in 1842 on the initiative of James Weller, a "somewhat remarkable man" whose preaching had attracted large audiences across Kent and East Sussex in the previous decade. The Strict Baptist cause was historically strong in East Sussex, and Protestant Nonconformism thrived in Robertsbridge, which was distant from the nearest Anglican parish church. The chapel closed in about 1999 and permission was granted for its conversion into a house. English Heritage has designated it a Grade II Listed building.

Sir Goddard Oxenbridge was an English landowner and administrator from Sussex.

Ticehurst is an English surname. It is not known whether this surname refers to the village of Ticehurst, England or to a similarly named sub-manor of nearby Burwash which has since fallen into disuse. The surname was used as long ago as 1264, and has been used continuously since at least 1432 by a family living in Ashburnham. 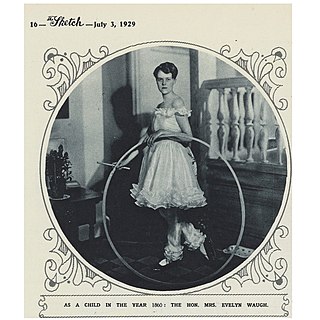 The Hon. Evelyn Florence Margaret Winifred Gardner was the youngest child of Herbert Gardner, 1st Baron Burghclere, and the first wife of Evelyn Waugh. She was one of the Bright Young Things.

Staplecross is a village in the civil parish of Ewhurst and the Rother district of East Sussex, England. Staplecross is the largest settlement in Ewhurst parish, and is on a southern ridge of the valley of the River Rother which flows through Bodiam at the north of Staplecross. The village is in the High Weald Area of Outstanding Natural Beauty. In 2011 it had a population of 760.