Tooth and nail syndrome (also known as "Hypodontia with nail dysgenesis," [1] and "Witkop syndrome" [1] ) is a rare disorder, first described in 1965, characterized by nails that are thin, small, and friable, and which may show koilonychia at birth. [1] :521 [2] 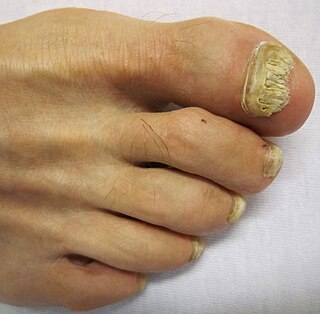 Onychomycosis, also known as tinea unguium, is a fungal infection of the nail. Symptoms may include white or yellow nail discoloration, thickening of the nail, and separation of the nail from the nail bed. Toenails or fingernails may be affected, but it is more common for toenails to be affected. Complications may include cellulitis of the lower leg. A number of different types of fungus can cause onychomycosis, including dermatophytes and Fusarium. Risk factors include athlete's foot, other nail diseases, exposure to someone with the condition, peripheral vascular disease, and poor immune function. The diagnosis is generally suspected based on the appearance and confirmed by laboratory testing. 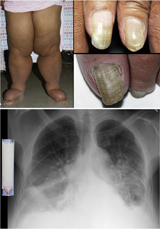 Nail–patella syndrome is a genetic disorder that results in small, poorly developed nails and kneecaps, but can also affect many other areas of the body, such as the elbows, chest, and hips. The name "nail–patella" can be very misleading because the syndrome often affects many other areas of the body, including even the production of certain proteins. Those affected by NPS may have one or more affected areas of the body, and its severity varies depending on the individual. It is also referred to as iliac horn syndrome, hereditary onychoosteodysplasia, Fong disease or Turner–Kieser syndrome.

Koilonychia, also known as spoon nails, is a nail disease that can be a sign of hypochromic anemia, especially iron-deficiency anemia. It refers to abnormally thin nails which have lost their convexity, becoming flat or even concave in shape. In a sense, koilonychia is the opposite of nail clubbing. In early stages nails may be brittle and chip or break easily.

Muehrcke's nails or Muehrcke's lines are changes in the fingernail that may be a sign of an underlying medical condition. The term refers to a set of one or more pale transverse bands extending all the way across the nail, parallel to the lunula. In contrast to Beau's lines, they are not grooved, and in contrast to Mees' lines, the thumb is usually not involved.

Msh homeobox 1, also known as MSX1, is a protein that in humans is encoded by the MSX1 gene. MSX1 transcripts are not only found in thyrotrope-derived TSH cells, but also in the TtT97 thyrotropic tumor, which is a well differentiated hyperplastic tissue that produces both TSHß- and a-subunits and is responsive to thyroid hormone. MSX1 is also expressed in highly differentiated pituitary cells which until recently was thought to be expressed exclusively during embryogenesis. There is a highly conserved structural organization of the members of the MSX family of genes and their abundant expression at sites of inductive cell–cell interactions in the embryo suggest that they have a pivotal role during early development. 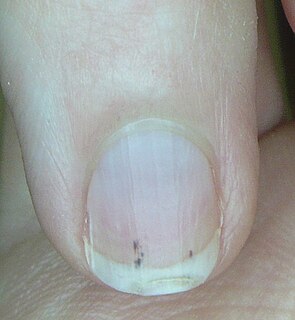 Splinter hemorrhages are tiny blood clots that tend to run vertically under the nails. Splinter hemorrhages are not specific to any particular condition, and can be associated with subacute infective endocarditis, scleroderma, trichinosis, systemic lupus erythematosus (SLE), rheumatoid arthritis, psoriatic nails, antiphospholipid syndrome, haematological malignancy, and trauma. At first they are usually plum-colored, but then darken to brown or black in a couple of days. In certain conditions, clots can migrate from the affected heart valve and find their way into various parts of the body. If this happens in the finger, it can cause damage to the capillaries resulting in a splinter hemorrhage.

Keratitis–ichthyosis–deafness syndrome presents at birth/infancy and is characterized by progressive corneal opacification, either mild generalized hyperkeratosis or discrete erythematous plaques, and neurosensory deafness.

Pterygium inversum unguis is characterized by the adherence of the distal portion of the nailbed to the ventral surface of the nail plate. The condition may be present at birth or acquired, and may cause pain with manipulation of small objects, typing, and close manicuring of the nail. secondary due to connective tissue disorders

Trichothiodystrophy (TTD) is an autosomal recessive inherited disorder characterised by brittle hair and intellectual impairment. The word breaks down into tricho – "hair", thio – "sulphur", and dystrophy – "wasting away" or literally "bad nourishment". TTD is associated with a range of symptoms connected with organs of the ectoderm and neuroectoderm. TTD may be subclassified into four syndromes: Approximately half of all patients with trichothiodystrophy have photosensitivity, which divides the classification into syndromes with or without photosensitivity; BIDS and PBIDS, and IBIDS and PIBIDS. Modern covering usage is TTD-P (photosensitive), and TTD.

Tricho–rhino–phalangeal syndrome type 2 is a genetic disorder consisting of fine and sparse scalp hair, thin nails, pear-shaped broad nose, and cone-shaped epiphyses of the middle phalanges of some fingers and toes.

Parakeratosis pustulosa is a cutaneous condition which is exclusively seen in children, usually involving one finger, most commonly the thumb or index finger, with the affected nail showing subungual hyperkeratosis and onycholysis.

Paraneoplastic acrokeratosis, or Bazex syndrome is a cutaneous condition characterized by psoriasiform changes of hands, feet, ears, and nose, with involvement of the nails and periungual tissues being characteristic and indistinguishable from psoriatic nails. The condition is associated with carcinomas of the upper aerodigestive tract.

A sebaceous adenoma, a type of adenoma, a cutaneous condition characterized by a slow-growing tumor usually presenting as a pink, flesh-coloured, or yellow papule or nodule.

Laryngo-onycho-cutaneous syndrome is a rare epithelial disorder inherited in an autosomal recessive fashion. It is characterized by abnormalities in the larynx, nails ("onycho-"), and skin ("cutaneous"). The disorder is only found in Punjabi Muslims and only a few cases have been reported.

Dysplastic nails are a cutaneous condition, and may be a subtle finding of ridging, flaking, or poor growth of the nails, or more diffuse with nearly complete loss of nails. This condition may be seen in a number of syndromes, including Dyskeratosis congenita and Nail–patella syndrome.