Ungnadia is a genus of flowering plants in the family Sapindaceae containing one species, Ungnadia speciosa, the Mexican buckeye. It is native to northern Mexico, as well as Texas and southern New Mexico in the United States. [1] [2] The name honours Austrian ambassador Baron David von Ungnad, who brought the horse chestnut to Vienna in 1576, introducing the plant into western Europe. [3] [4] [5] [6]

It differs from the buckeyes in the related genus Aesculus but the seeds and nuts are similar. [7] [5] [8] [9] Another similar related genus is the soapberry (genus Sapindus ). Ungnadia seeds are poisonous despite their sweetness, and sometimes used as marbles. [10] The foliage is toxic and rarely browsed by livestock, but bees produce honey from the floral nectar. [5]

The genus Aesculus, with varieties called buckeye and horse chestnut, comprises 13–19 species of flowering plants in the soapberry and lychee family, Sapindaceae. They are trees and shrubs native to the temperate Northern Hemisphere, with six species native to North America and seven to thirteen species native to Eurasia. Several hybrids occur. Aesculus exhibits a classical Arcto-Tertiary distribution.

Euonymus is a genus of flowering plants in the staff vine family, Celastraceae. Common names vary widely among different species and between different English-speaking countries, but include spindle, burning-bush, strawberry-bush, wahoo, wintercreeper, or simply euonymus. It comprises about 130 species of deciduous and evergreen shrubs, small trees and lianas. They are mostly native to East Asia, extending to the Himalayas, and they are also distributed in Europe, Australasia, North America, and Madagascar. 50 species are endemic to China.

Erythrina herbacea, commonly known as the coral bean, Cherokee bean, Mamou plant in South Louisiana, red cardinal or cardinal spear, is a flowering shrub or small tree found throughout the southeastern United States and northeastern Mexico; it has also been reported from parts of Central America and, as an introduced species, from Pakistan. Various other systematic names have been used for this plant in the past, including Erythrina arborea, Erythrina hederifolia, Erythrina humilis, Erythrina rubicunda, Corallodendron herbaceum and Xyphanthus hederifolius.

Parkinsonia, also Cercidium, is a genus of flowering plants in the pea family, Fabaceae. It contains about 12 species that are native to semi-desert regions of Africa and the Americas. The name of the genus honors English apothecary and botanist John Parkinson (1567–1650).

The creeping zinnias are plants belonging to the sunflower family. They are native to mostly to Mexico, with a few species in Central America, South America, and the Southwestern United States.

Cocculus is a genus of 11 species of woody vines and shrubs, native to warm temperate to tropical regions of North America, Asia and Africa. The common name moonseed is also used for the closely related genus Menispermum. The related Indian berry is known as "Cocculus Indicus" in pharmacology.

Chilopsis is a monotypic genus of flowering plants containing the single species Chilopsis linearis. It is known commonly as desert willow or desert-willow because of its willow-like leaves, but it is not a true willow – being instead a member of the catalpa family.

Leucaena is a genus of flowering plants in the mimosoid clade of the subfamily Caesalpinioideae of the legume family Fabaceae. It contains about 24 species of trees and shrubs, which are commonly known as leadtrees. They are native to the Americas, ranging from Texas in the United States south to Peru. The generic name is derived from the Greek word λευκός (leukos), meaning "white," referring to the flowers. 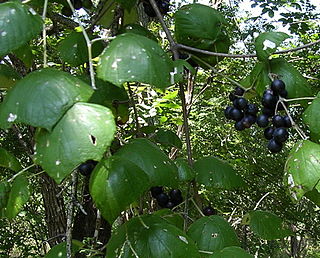 Vitis mustangensis, commonly known as the mustang grape, is a species of grape that is native to the southern United States. Its range includes parts of Mississippi, Alabama, Louisiana, Texas, and Oklahoma.

Dermatophyllum secundiflorum is a species of flowering shrub or small tree in the pea family, Fabaceae, that is native to the southwestern United States and Mexico. Common names include Texas mountain laurel, Texas mescalbean, frijolito, and frijolillo.

Leucophyllum frutescens is an evergreen shrub in the figwort family, Scrophulariaceae, native to the state of Texas in the southwestern United States and the states of Coahuila, Nuevo León, and Tamaulipas in northern Mexico. Although commonly known as Texas sage, it is not a true sage and is distinct from the genus Salvia. The species is also called Texas Ranger, Texas rain sage, cenizo, Texas silverleaf, Texas barometerbush, ash-bush, wild lilac, purple sage, senisa, cenicilla, palo cenizo, or hierba del cenizo.

Sideroxylon celastrinum is a species of flowering plant in the family Sapotaceae, that is native to Texas and Florida in the United States south through Central America to northern Venezuela and Colombia in South America. Common names include saffron plum and coma. It is a spiny shrub or small tree that reaches a height of 2–9 m (6.6–29.5 ft). The dark green leaves are alternate or fascicled at the nodes and oblanceolate to obovate. Greenish-white flowers are present from May to November and are followed by single-seeded, blue-black drupes.

Erythrostemon mexicanus is a species of flowering plant in the pea family, Fabaceae. Common names include Mexican holdback, Mexican caesalpinia, and tabachín del monte. It is native to the extreme lower Rio Grande Valley of Texas in the United States and south to central Mexico. Its range in Mexico includes the northeast and further south along the Gulf coast as well as the Pacific coast in Nayarit, Jalisco, Colima, and a small portion of Sinaloa.

Guaiacum angustifolium is a species of flowering plant in the caltrop family, Zygophyllaceae. Common names include Texas guaiacum, Texas lignum-vitae, soapbush and huayacán. It is native to southern and western Texas in the United States and northern Mexico. The specific name is derived from the Latin angustus, meaning "narrow," and -folius, meaning "-leaved".

Chiococca alba is a species of flowering plant in the coffee family (Rubiaceae) native to Florida and the extreme southern tip of Texas in the United States, Bermuda, Mexico, Central America, the Caribbean, the Galápagos, and tropical South America. Common names include David's milkberry, West Indian milkberry, cahinca and West Indian snowberry. The specific epithet, alba, means "white" in Latin and refers to the color of its fruits.

Esenbeckia runyonii is a species of flowering tree in the citrus family, Rutaceae, that is native to northeastern Mexico, with a small, disjunct population in the Lower Rio Grande Valley of Texas in the United States. Common names include Limoncillo and Runyon's Esenbeckia. The specific epithet honors Robert Runyon, a botanist and photographer from Brownsville, Texas, who collected the type specimen from a stand of four trees discovered by Harvey Stiles on the banks of Resaca del Rancho Viejo, Texas, in 1929. Conrad Vernon Morton of the Smithsonian Institution received the plant material and formally described the species in 1930. Some consider it a synonym of E. berlandieriBaill. ex Hemsl..

Quercus pungens, commonly known as the sandpaper oak or scrub oak, is a North American species evergreen or sub-evergreen shrub or small tree in the white oak group. There is one recognised variety, Quercus pungens var. vaseyana, the Vasey shin oak. Sandpaper oak hybridizes with gray oak in the Guadalupe Mountains of New Mexico and Texas.

Quercus mohriana, commonly known as the Mohr oak, shin oak or scrub oak, is a North American evergreen shrub or small tree in the white oak group and is native to the south-central United States and north-central Mexico. The species epithet mohriana honors the pharmacist and botanist Charles Mohr of Alabama.

Prunus havardii, called Havard's wild almond or Havard's plum, is a rare North American species of shrub tree native to western Texas in the United States and to northern Chihuahua across the Río Grande in Mexico. It is in the genus Prunus in the rose family, Rosaceae.