Last updated April 18, 2020
Not to be confused with Soapnet.

Sapindus is a genus of about five to twelve species of shrubs and small trees in the Lychee family, Sapindaceae, native to warm temperate to tropical regions of the world. The genus includes both deciduous and evergreen species. Members of the genus are commonly known as soapberries [3] or soapnuts because the fruit pulp is used to make soap. The generic name is derived from the Latin words sapo, meaning "soap", and indicus, meaning "of India". [4]

The leaves are alternate, 15–40 cm (5.9–15.7 in) long, pinnate (except in S. oahuensis, which has simple leaves), with 14-30 leaflets, the terminal leaflet often absent. The flowers form in large panicles, each flower small, creamy white. The fruit is a small leathery-skinned drupe 1–2 cm (0.39–0.79 in) in diameter, yellow ripening blackish, containing one to three seeds.

The drupes (soapnuts) contain saponins, which have surfactant properties, having been used for washing by ancient Asian people and Native Americans. [5]

Soapnuts have historically been used in folk remedies, [6] but, as the effectiveness of such treatments has not been subjected to scientific scrutiny, there are no confirmed health benefits of using soapnuts to treat any human disease. The soapnut contains saponins, which are under laboratory research for their potential antimicrobial properties. [6]

Sapindus species are used as food plants by the larvae of some Lepidoptera (moths and butterflies) species including Endoclita malabaricus. Kernel extracts of soapnut disrupt the activity of enzymes of larvae and pupae and inhibits the growth of the mosquito Aedes aegypti , an important vector of viral diseases. [7]

Soapnut is used as a dyeing agent for coloring the yarn of Tussar silk and cotton. [8]

The number of species is disputed between different authors, particularly in North America where between one and three species are accepted. 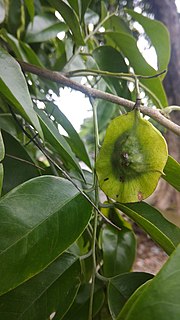 Pterocarpus is a pantropical genus of trees in the family Fabaceae. It belongs to the subfamily Faboideae, and was recently assigned to the informal monophyletic Pterocarpus clade within the Dalbergieae. Most species of Pterocarpus yield valuable timber traded as padauk ; other common names are mukwa or narra. P. santalinus also yields the most precious rosewood in China known as Zitan. The wood from the narra tree and the Burmese padauk tree is marketed as amboyna when it has grown in the burl form. The scientific name is Latinized Ancient Greek and means "wing fruit", referring to the unusual shape of the seed pods in this genus.

The Sapindaceae are a family of flowering plants in the order Sapindales known as the soapberry family. It contains 138 genera and 1858 accepted species. Examples include horse chestnut, maples, ackee and lychee.

Saponins a class of chemical compounds found in particular abundance in various plant species. More specifically, they are amphipathic glycosides grouped phenomenologically by the soap-like foam they produce when shaken in aqueous solutions, and structurally by having one or more hydrophilic glycone moieties combined with a lipophilic triterpene or steroid derivative.

Saponaria officinalis is a common perennial plant from the family Caryophyllaceae. This plant has many common names, including common soapwort, bouncing-bet, crow soap, wild sweet William, and soapweed. There are about 20 species of soapworts altogether.

Guarea is a genus of evergreen trees in the family Meliaceae, native to tropical Africa and Central and South America. They are large trees 20–45 m tall, with a trunk over 1 m diameter, often buttressed at the base. The leaves are pinnate, with 4–6 pairs of leaflets, the terminal leaflet present. The flowers are produced in loose inflorescences, each flower small, with 4–5 yellowish petals. The fruit is a four or five-valved capsule, containing several seeds, each surrounded by a yellow-orange fleshy aril; the seeds are dispersed by hornbills and monkeys which eat the aril.

Malpighia is a genus of flowering plants in the nance family, Malpighiaceae. It contains about 45 species of shrubs or small trees, all of which are native to the American tropics. The generic name honours Marcello Malpighi, a 17th-century Italian physician and botanist. The species grow to 1–6 m (3.3–19.7 ft) tall, with a dense, often thorny crown. The leaves are evergreen, simple, 0.5–15 cm (0.20–5.91 in) long, with an entire or serrated margin. The flowers are solitary or in umbels of two to several together, each flower 1–2 cm (0.39–0.79 in) diameter, with five white, pink, red, or purple petals. The fruit is a red, orange, or purple drupe, containing two or three hard seeds. M. emarginata is cultivated for its sweet and juicy fruits, which are very rich in vitamin C.

Jagera is a genus of 4 species of forest trees known to science, constituting part of the plant family Sapindaceae. 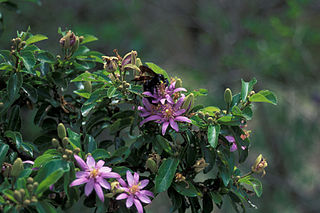 The large flowering plant genus Grewia is today placed by most authors in the mallow family Malvaceae, in the expanded sense as proposed by the Angiosperm Phylogeny Group. Formerly, Grewia was placed in either the family Tiliaceae or the Sparrmanniaceae. However, these were both not monophyletic with respect to other Malvales - as already indicated by the uncertainties surrounding placement of Grewia and similar genera - and have thus been merged into the Malvaceae. Together with the bulk of the former Sparrmanniaceae, Grewia is in the subfamily Grewioideae and therein the tribe Grewieae, of which it is the type genus.

Sapindus oahuensis is a species of tree in the soapberry family, Sapindaceae. It is endemic to Hawaii, where it is limited to Kauaʻi and Oʻahu. Its common names include Āulu, Oahu soapberry, alulu, kaulu, and lonomea.

Lepisanthes tetraphylla is a tree of India and Sri Lanka and other South Asian countries.

Connarus is a genus of plants in the family Connaraceae. 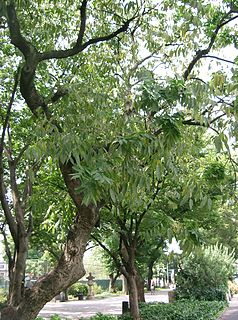 Sapindus mukorossi is a species of tree in the family Sapindaceae. The fruit is commonly known as Indian soapberry or washnut, and like other species in the genus Sapindus, it is called soapberry. It is also a native of Western coastal Maharashtra – Konkan, and Goa in India. Sapindus mukorrossi, known as the ritha or reetha tree in India (Hindi) and Nepal, is a deciduous tree that is grown in the lower foothills and midhills of the Himalayans, up to altitudes of 4000 feet. It is tolerant to reasonably poor soil, can be planted around farmers’ homes, and one Ritha tree can produce 30–35 kg of fruit per year.

Sapindoideae is a subfamily of flowering plants in the soapberry family, Sapindaceae.