Last updated May 31, 2021
A topological space is normal iff any 2 disjoint closed subsets can be separated

In topology, Urysohn's lemma is a lemma that states that a topological space is normal if and only if any two disjoint closed subsets can be separated by a continuous function. [1]

Urysohn's lemma is commonly used to construct continuous functions with various properties on normal spaces. It is widely applicable since all metric spaces and all compact Hausdorff spaces are normal. The lemma is generalized by (and usually used in the proof of) the Tietze extension theorem.

The lemma is named after the mathematician Pavel Samuilovich Urysohn.

Two subsets A and B of a topological space X are said to be separated by neighbourhoods if there are neighbourhoods U of A and V of B that are disjoint. In particular A and B are necessarily disjoint.

Two plain subsets A and B are said to be separated by a function if there exists a continuous function f from X into the unit interval [0,1] such that f(a) = 0 for all a in A and f(b) = 1 for all b in B. Any such function is called a Urysohn function for A and B. In particular A and B are necessarily disjoint.

The sets A and B need not be precisely separated by f, i.e., we do not, and in general cannot, require that f(x) ≠ 0 and ≠ 1 for x outside of A and B. The spaces in which this property holds are the perfectly normal spaces.

Urysohn's lemma has led to the formulation of other topological properties such as the 'Tychonoff property' and 'completely Hausdorff spaces'. For example, a corollary of the lemma is that normal T1 spaces are Tychonoff.

A topological space X is normal if and only if, for any two non-empty closed disjoint subsets A and B of X, there exists a continuous map

The procedure is an entirely straightforward application of the definition of normality (once one draws some figures representing the first few steps in the induction described below to see what is going on), beginning with two disjoint closed sets. The clever part of the proof is the indexing of the open sets thus constructed by dyadic fractions.

For every dyadic fraction r ∈ (0,1), we are going to construct an open subset U(r) of X such that:

In order to construct the sets U(r), we actually do a little bit more: we construct sets U(r) and V(r) such that

Since the complement of V(r) is closed and contains U(r), the latter condition then implies condition (2) from above.

The Mizar project has completely formalized and automatically checked a proof of Urysohn's lemma in the URYSOHN3 file.

In topology, the Tietze extension theorem states that continuous functions on a closed subset of a normal topological space can be extended to the entire space, preserving boundedness if necessary.

In topology and related branches of mathematics, separated sets are pairs of subsets of a given topological space that are related to each other in a certain way: roughly speaking, neither overlapping nor touching. The notion of when two sets are separated or not is important both to the notion of connected spaces as well as to the separation axioms for topological spaces. 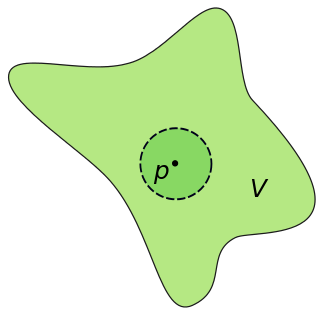