Zygadenia is an extinct genus of beetles in the family Ommatidae. 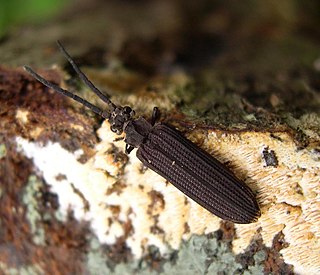 The Cupedidae are a small family of beetles, notable for the square pattern of "windows" on their elytra, which give the family their common name of reticulated beetles.

The Cerophytidae are a family of Coleoptera known as the rare click beetles. Adults are infrequently encountered, and larvae are found within wood, where they are believed to feed on fungi. The family contains over 20 species in five genera, primarily distributed in the New World: 17 fossil genera are known extending to the Early Jurassic. 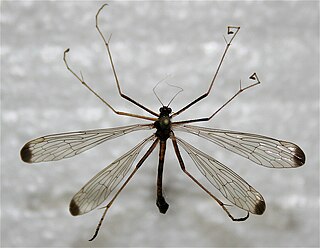 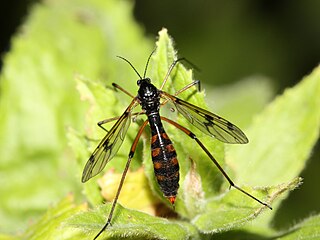 Nemonychidae is a small family of weevils, placed within the primitive weevil group because they have straight rather than elbowed antennae. They are often called pine flower weevils. As in the Anthribidae, the labrum appears as a separate segment to the clypeus, and the maxillary palps are long and projecting. Nemonychidae have all ventrites free, while Anthribidae have ventrites 1-4 connate or partially fused. Nemonychidae lack lateral carinae on the pronotum, while these are usually present, though may be short, in Anthribidae.

Coptoclavidae is an extinct family of aquatic beetles in the suborder Adephaga. The Coptoclavidae lived from the Triassic to the Early Cretaceous. Coptoclavidae is a clade of Dytiscoidea. The increase in the teleost fish population and the competition of Gyrinidae and Dytiscidae is believed to have caused their extinction.

Protorabinae is a subfamily of beetles in the family Carabidae. It contains 31 species in 10 genera:

Cionocoleus is an extinct genus of beetles in the family Ommatidae.

Omma is a genus of beetles in the family Ommatidae. Omma is an example of a living fossil. The oldest species known, O. liassicum, lived during the final stage of the Triassic (Rhaetian), followed by several other species from Europe and Asia until after O. attenuatum from the Lower Cretaceous, the genus then reappears in the Burmese amber during the Cenomanian, then disappears from the fossil record for the remaining 100 million years until today, with one species endemic to Australia, three other extant species that were formerly part of this genus were moved to the separate genus Beutelius in 2020. The extant Omma stanleyi is strongly associated with wood, being found under Eucalyptus bark and exhibiting thanatosis when disturbed. Its larval stage and many other life details are unknown due to its rarity. Males are typically 14-20 mm in length, while females are 14.4-27.5 mm. Omma stanleyi occurs throughout eastern Australia from Victoria to Central Queensland. 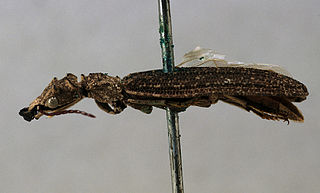 Tetraphalerus is a genus of beetles in the family Ommatidae, It is currently known from two extant species native to South America and several fossil species from the Jurassic and Cretaceous of Asia.

Locustopsidae is an extinct family of grasshoppers in the order Orthoptera. There are about 17 genera and more than 60 described species in Locustopsidae.

Mesopsychidae is an extinct family of scorpionflies known from the Late Permian to Mid Cretaceous. It is part of Mesopsychoidea, a group of scorpionflies with siphonate proboscis. They are suggested to have been nectarivores, feeding off the liquid pollination drops and acting as pollinators for now extinct insect pollinated gymnosperms such as Bennettitales.

Blattulidae is an extinct family of cockroaches known from the Triassic to the Late Cretaceous. Their distinguishing characteristics include "forewing has long Sc, regular venation with distinct intercalaries and hindwing has simple CuP, branched A1."

Mesoblattinidae is an extinct family of cockroaches known from the Mesozoic. It was formerly considered a wastebasket taxon for Mesozoic cockroaches, but the family has subsequently been better defined, with many taxa transferred to Caloblattinidae. It is considered to have close affinities with Blattidae and Ectobiidae, as well as possibly Blaberidae.

Allophalerus is an extinct genus of beetle in the family Ommatidae.

Archijassidae is an extinct family of leafhoppers known from the Late Triassic to the early Late Cretaceous. It is the oldest member of Membracoidea, and is considered ancestral to modern leaf and treehoppers.

Procercopidae is an extinct family of froghoppers. They are known from the Early Jurassic to early Late Cretaceous of Eurasia. They are one of two main families of Mesozoic froghoppers alongside Sinoalidae. Procercopidae are considered to be the ancestral group from which modern froghoppers are derived.

Mesochrysopidae is an extinct family of lacewings known from the Jurassic and Cretaceous periods. They are considered to be closely related to green lacewings of the family Chrysopidae. The family are also alternatively considered a paraphyletic grade leading up to crown Chrysopidae.

Necrotauliidae is an extinct family Mesozoic Amphiesmenoptera. While previously considered a paraphyletic grouping of "basal Trichoptera, basal Lepidoptera, and advanced stem-Amphiesmenoptera", they have recently been considered early diverging caddisflies.