He won his first world-level medal in 2003, when he finished third in the first World Athletics Final in 45.25 s. He had won a 400 metres gold medal and finished fifth in 4x400 metres relay at the 2003 Central American and Caribbean Championships.

The next year he won the gold medal at the World Indoor Championships, achieving the result 45.88 s. Later that year he competed in 400 metres at the 2004 Summer Olympics, and finished fourth with 44.66 s.

In the 2005 World Championships in Helsinki, he competed in 400 metres but only reached the semi finals, running 46.59 s which is far above his personal best. In 2006, however, he defended his title at the World Indoor Championships with 45.54 s. In March the same year he won a silver medal at the 2006 Commonwealth Games. He then finished sixth at the World Athletics Final and fourth at the World Cup. 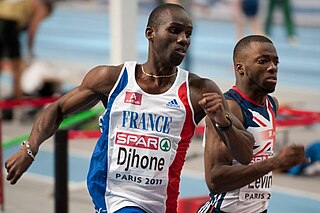 Éric Milazar is a Mauritian athlete competing in the 200 metres and 400 metres. He was born in Rodrigues and currently resides in Coromandel, Mauritius. He is married to Natacha Ramen-Milazar since 2006 an ex volleyball player and together they have two kids Ericson and Erica.

David Gillick is an Irish international track and field athlete. David began his education in Our Lady's Boys School and attended St Benildus College secondary school in Kilmacud. He studied at Dublin Institute of Technology before moving to Loughborough University in the United Kingdom to train as a full-time athlete with coach Nick Dakin. Gillick specialises in the 400 metres and he won the European Indoor Championship in 2005 and 2007, as well as the Irish National Outdoor Championship in 2006 and 2007. He set the Irish Indoor record of 45.52 seconds in the 2007 final. The time also beat the Irish outdoor record of 45.58 and was within the Olympic 'A' qualifying standard for the 2008 Games. On 4 July 2009 he ran 44.77 seconds in a race in Madrid to set a new national record. He is also the 2009 Irish national 200 m champion. 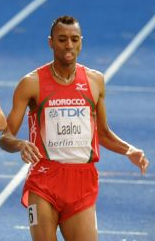 Jan Werner was a Polish sprinter who specialized in the 200 and 400 metres. 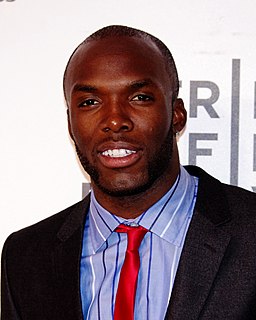 Manuel Olmedo Villar is a Spanish middle-distance runner. He specialises in the 800 metres. He represented Spain at the Olympic Games at both the 2004 Athens Games and 2008 Beijing Olympics. He also ran at the World Championships in Athletics in 2003, 2007 and 2009.

Ricardo Chambers is a Jamaican track and field athlete who specialises in the 400 metres.

Rondell Bartholomew is a Grenadian track and field sprinter who specialises in the 400 metres. He has represented his country at two World Championships in Athletics and was a 400 m world finalist in 2011. His personal best for the event is 44.65 seconds. 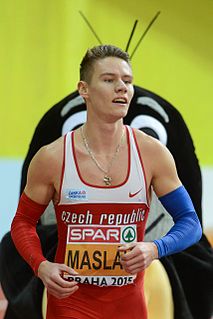 Pavel Maslák is a Czech sprinter who specialises in the 200 metres and 400 metres. He is the only athlete in history who has managed to win the 400 m title at the World Indoor Championships at three consecutive championships. Maslák is the first Czech to have run 400 metres under 45 seconds outdoor and under 46 seconds indoor.