Michael L. McDonald (born 17 March 1975 in Saint Mary Parish, Jamaica) is a Jamaican runner who competed mainly in the 400 metres.

He competed for Jamaica at the 1996 Summer Olympics held in Atlanta, United States where he won the bronze medal in the men's 4 × 400 metres relay with his teammates Roxbert Martin, Greg Haughton and Davian Clarke.

1Did not finish in the semifinals

Novlene Hilaire Williams-Mills, is a retired Jamaican track and field athlete. She won the bronze medal in the 400 metres at the 2007 World Championships. She is also a three-time Olympic silver medallist in the 4×400 metres relay.

Michael Blackwood is a Jamaican male track and field athlete, who specialized in the 400 meters, his personal best being 44.60 set during his win at the 2002 IAAF World Cup. He was chosen as the Jamaica Sportsman of the Year in 2002, in that same year he was the world number one rank by IAAF in the 400 meters. He is the brother of Catherine Scott who earned a silver medal in the 2000 Sydney Olympics Games. Blackwood won the NAIA national 400 meters title in 1997. He is the winner of Jamaica 400 meters national championships three times. Blackwood holds the Big 12 conference record in the 400 meters since 2000 in the time of 44.69. He is an alumnus of The University of Oklahoma.

Gregory Haughton is a Jamaican 400 metres runner. He won three Olympic medals, one at the 1996 Summer Olympics and two at the 2000 Summer Olympics. His personal best for the 400 m was 44.56 seconds. 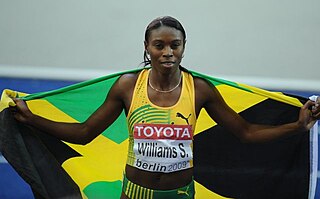 Danny D. McFarlane, OD is a Jamaican hurdler, who has won numerous international medals in individual and relay contests. Having won five medals at the World Championships in Athletics and an Olympic bronze medal with the Jamaican 4 x 400 metres team, McFarlane has also won in individual competition: he took an Olympic silver medal in the 400 metres hurdles at the 2004 Athens Olympics.

Lerone Ephraime Clarke is a Jamaican track and field sprinter who specialises in the 100 metres and the 60 metres. He is the former Commonwealth Games champion in the 100 m. His personal best for that distance is 9.99 seconds, set in 2009. He has represented Jamaica three times at the IAAF World Indoor Championships and holds the Jamaican record for the indoor 150m.

John Mair is a Jamaican former track and field sprinter who competed in the 100 metres and 200 metres. He won several medals with the Jamaican relay team, taking Jamaica's first World Championships relay medal at the 1987 World Championships in Athletics, as well as a bronze medal at the Pan American Games in 1987 and two relay bronze medals at the 1990 Commonwealth Games.

Yvonne Saunders-Mondesire is a Jamaican-Canadian former track and field athlete. A versatile athlete, she competed in women's pentathlon, long jump, high jump, 400 metres and 800 metres. She competed internationally for Canada, Jamaica, and England during her career.