He ran the anchor leg on the gold medal winning 4x400 meter relay team at the 2004 Summer Olympics in Athens. He also won World Championship gold medals on two subsequent relay teams. He is 2005 graduate of Baylor University in Waco, Texas, where he won the Big 12 Conference championship in the 400 meter run three years in a row (2001–2003). Each of the aforementioned relay teams also included Baylor teammate Jeremy Wariner. He set a personal best of 44.27 seconds in the 400 meter run in the semifinals of the NCAA Outdoor Championships in 2005. [1] He is a 2001 graduate of Business Careers High School in San Antonio, Texas. Williamson was in the foster care program of the State of Texas and is a Preparation for Adult Living(PAL) alumnus. [2]

Otis Harris Jr. is an American track and field athlete. He won the silver medal in the 400 meters at the 2004 Summer Olympics.

Clyde Hart is the director of track and field at Baylor University. Hart retired as head coach for the Baylor track program on June 14, 2005 after 42 years with the program.

Maritza Correia, also known by her married name Maritza McClendon, is a former Olympic swimmer from Puerto Rico who swam representing the United States. When she qualified for the U.S. Olympic team in 2004, she became the first Puerto Rican of African descent to be a member of the U.S. Olympic swimming team. She was the first female African-American swimmer for the United States to win an Olympic medal. She also became the first black American swimmer to set an American and world swimming record.

Danny Everett is an American former track and field athlete who competed in sprinting events, specializing in the 400 metres. He won bronze medals in the 400m at the 1988 Olympic Games and at the 1991 World Championships, and won gold medals in the 4 × 400 m relay at the 1987 World Championships and the 1988 Olympic Games. His 400m best of 43.81 seconds when winning the 1992 US Olympic trials, moved him to second on the world all-time list and still ranks him tenth on the world all-time list. 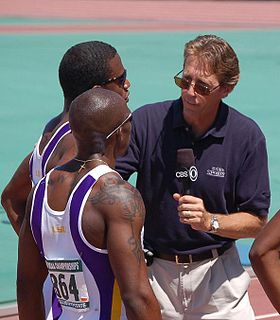 Shaun M. Jordan is an American former competition swimmer who was highly successful as a member of the U.S. freestyle relay teams in the 1988 and 1992 Summer Olympics.

Raymond Pierre is a former American track and field athlete, who competed in the sprinting events during his career. Pierre won the 1989 NCAA 400 meters running for Baylor University. He is best known for winning the men's 400-meter dash event at the 1987 Pan American Games. 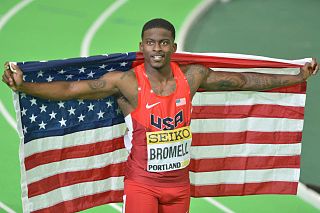 Trayvon Jaquez Bromell is an American professional track and field athlete specializing in sprinting events. He was the first junior to break the 10-second barrier in the 100 meters with a time of 9.97 seconds, the current junior world record. Bromell's personal best time in the 100m of 9.77 seconds makes him the 7th fastest man of all time. He is the 2016 world indoor 60 m champion and competed for the United States at the 2016 Summer Olympics.

Francis Townley Haas is an American competition swimmer who specializes in freestyle events. He is an Olympic gold medalist in the 4 × 200 m freestyle relay from the 2016 Summer Olympics in Rio de Janeiro. Haas competed collegiately for the University of Texas at Austin from 2015 to 2019 under head coach Eddie Reese where he was a 10-time NCAA Champion, a 17-time All-American, and a 3-time NCAA team champion. He is the former American record-holder in the 200-yard freestyle (1:29.50) and currently represents the Cali Condors in the International Swimming League.

The Baylor Bears track and field program represents the Baylor University in the sport of track and field. The indoor and outdoor programs compete in Division I of the National Collegiate Athletic Association (NCAA) and the Big 12 Conference. The Bears host their home outdoor meets at Clyde Hart Track and Field Stadium, located on the university's Waco, Texas campus.

Quentin Jarrod Iglehart-Summers is an American former track and field sprinter, who specialized in the 400-meter dash. He set a personal record of 45.46 seconds for the event in 2008. He was a gold medalist in the 4 × 400 metres relay at the IAAF World Indoor Championships in 2012. He also won a relay gold medal at the 2006 World Junior Championships in Athletics. At collegiate level he was a four-time national champion in the relay with the Baylor Bears.