Chukwu attended Eastern Michigan University where he received his Bachelor of Arts in Urban and Regional Planning, minoring in Geography, and a Master of Science degree in Geographical Information Systems. He is currently the Planning Director for the City of Pickerington, Ohio, a suburb southeast of Columbus.

After being banned from 1992–1996 for a positive drug test he reemerged at the 1996 Olympics over 400 metres, being knocked out in the quarter finals. He later won gold medals in this event at the 1997 Universiade and the 1998 African Championships, and a silver medal at the 1999 All-Africa Games. At the 2000 Olympics he was a part of the Nigerian team that won the silver medal in the 4 x 400 metres relay, which was later elevated to gold after the USA team was stripped of the gold medal.

He was inducted into the Eastern Michigan Hall of Fame in 2011.

Falilat Ogunkoya is a Nigerian former track and field athlete.

The Eastern Michigan Eagles, formerly known as the Normalites and the Hurons, are the athletic teams for Eastern Michigan University in Ypsilanti, Michigan, United States. The Eagles compete in the National Collegiate Athletic Association (NCAA) at the Division I level as members of the Mid-American Conference (MAC). The only exception is the women's rowing program, which is a member of the Colonial Athletic Association. Altogether, the Eagles have won three NCAA Division II national championships and 13 NAIA Division I national championships in five different sports ; moreover, EMU has been NCAA Division I national runner-up twice. In 1940, the men's cross country team finished second to Indiana University at the national meet hosted by Michigan State University. 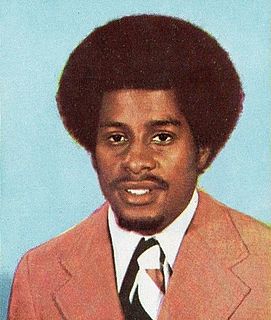 Passion J. Richardson is an American former track and field athlete who competed in sprinting events.