Arithmetica Universalis ("Universal Arithmetic") is a mathematics text by Isaac Newton. Written in Latin, it was edited and published by William Whiston, Newton's successor as Lucasian Professor of Mathematics at the University of Cambridge. The Arithmetica was based on Newton's lecture notes. 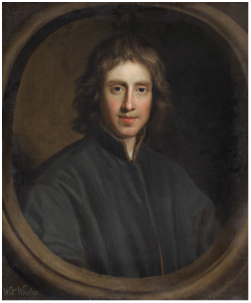 Whiston's original edition was published in 1707. It was translated into English by Joseph Raphson, who published it in 1720 as the Universal Arithmetick. John Machin published a second Latin edition in 1722.

Joseph Raphson was an English mathematician known best for the Newton–Raphson method.

John Machin, a professor of astronomy at Gresham College, London, is best known for developing a quickly converging series for Pi in 1706 and using it to compute Pi to 100 decimal places.

None of these editions credits Newton as author; Newton was unhappy with the publication of the Arithmetica, and so refused to have his name appear. In fact, when Whiston's edition was published, Newton was so upset he considered purchasing all of the copies so he could destroy them.

The Arithmetica touches on algebraic notation, arithmetic, the relationship between geometry and algebra, and the solution of equations. Newton also applied Descartes' rule of signs to imaginary roots. He also offered, without proof, a rule to determine the number of imaginary roots of polynomial equations. Not for another 150 years would a rigorous proof to Newton's counting formula be found (by James Joseph Sylvester, published in 1865). 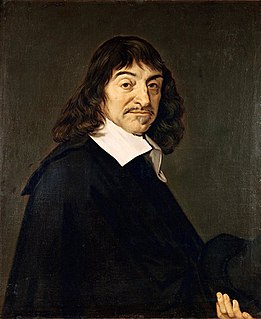 Diophantus of Alexandria was an Alexandrian Hellenistic mathematician, who was the author of a series of books called Arithmetica, many of which are now lost. His texts deal with solving algebraic equations. While reading Claude Gaspard Bachet de Méziriac's edition of Diophantus' Arithmetica, Pierre de Fermat concluded that a certain equation considered by Diophantus had no solutions, and noted in the margin without elaboration that he had found "a truly marvelous proof of this proposition," now referred to as Fermat's Last Theorem. This led to tremendous advances in number theory, and the study of Diophantine equations and of Diophantine approximations remain important areas of mathematical research. Diophantus coined the term παρισότης (parisotes) to refer to an approximate equality. This term was rendered as adaequalitas in Latin, and became the technique of adequality developed by Pierre de Fermat to find maxima for functions and tangent lines to curves. Diophantus was the first Greek mathematician who recognized fractions as numbers; thus he allowed positive rational numbers for the coefficients and solutions. In modern use, Diophantine equations are usually algebraic equations with integer coefficients, for which integer solutions are sought. 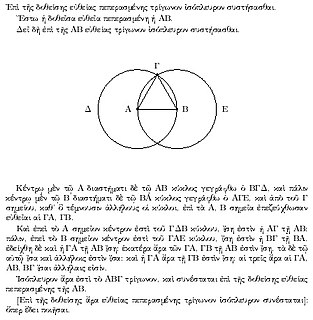 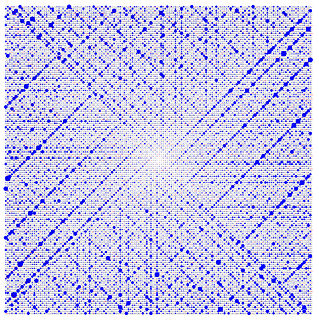 La Géométrie was published in 1637 as an appendix to Discours de la méthode, written by René Descartes. In the Discourse, he presents his method for obtaining clarity on any subject. La Géométrie and two other appendices, also by Descartes, La Dioptrique (Optics) and Les Météores (Meteorology), were published with the Discourse to give examples of the kinds of successes he had achieved following his method.

Muḥammad ibn Mūsā al-Khwārizmī, Arabized as al-Khwarizmi with al- and formerly Latinized as Algorithmi, was a Persian scholar who produced works in mathematics, astronomy, and geography. Around 820 AD he was appointed as the astronomer and head of the library of the House of Wisdom in Baghdad. 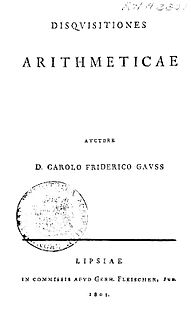 The Disquisitiones Arithmeticae is a textbook of number theory written in Latin by Carl Friedrich Gauss in 1798 when Gauss was 21 and first published in 1801 when he was 24. It is notable for having a revolutionary impact on the field of number theory as it not only turned the field truly rigorous and systematic but also paved the path for modern number theory. In this book Gauss brought together and reconciled results in number theory obtained by mathematicians such as Fermat, Euler, Lagrange, and Legendre and added many profound and original results of his own.

The Compendious Book on Calculation by Completion and Balancing, also known as Al-jabr (الجبر), is an Arabic mathematical treatise on algebra written by Persian polymath Muḥammad ibn Mūsā al-Khwārizmī around 820 CE while he was in the Abbasid capital of Baghdad, modern-day Iraq. Al-jabr was a landmark work in the history of mathematics, establishing algebra as an independent discipline, and with the term "algebra" itself derived from Al-jabr. 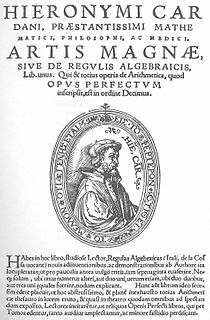 The Ars Magna is an important Latin-language book on algebra written by Gerolamo Cardano. It was first published in 1545 under the title Artis Magnæ, Sive de Regulis Algebraicis Liber Unus. There was a second edition in Cardano's lifetime, published in 1570. It is considered one of the three greatest scientific treatises of the early Renaissance, together with Copernicus' De revolutionibus orbium coelestium and Vesalius' De humani corporis fabrica. The first editions of these three books were published within a two-year span (1543–1545).

A timeline of key algebraic developments are as follows:

Richard Sault was an English mathematician, editor and translator, one of The Athenian Society. On the strength of his Second Spira he is also now credited as a Christian Cartesian philosopher.

Michael Stifel or Styfel was a German monk, Protestant reformer and mathematician. He was an Augustinian who became an early supporter of Martin Luther. He was later appointed professor of mathematics at Jena University. 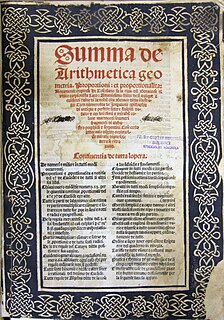 Summa de arithmetica, geometria, proportioni et proportionalita is a book on mathematics written by Luca Pacioli and first published in 1494. It contains a comprehensive summary of Renaissance mathematics, including practical arithmetic, basic algebra, basic geometry and accounting, written in Italian for use as a textbook.