Newton is a monotype by the English poet, painter and printmaker William Blake first completed in 1795, [1] but reworked and reprinted in 1805. [2] It is one of the 12 "Large Colour Prints" or "Large Colour Printed Drawings" created between 1795 and 1805, which also include his series of images on the biblical ruler Nebuchadnezzar .

Isaac Newton is shown sitting naked and crouched on a rocky outcropping covered with algae, apparently at the bottom of the sea. His attention is focused upon diagrams he draws with a compass upon a scroll. [3] The compass is a smaller version of that held by Urizen in Blake's The Ancient of Days .

Blake's opposition to the Enlightenment was deeply rooted. In his annotation to his own engraving of the classical character Laocoön, Blake wrote "Art is the Tree of Life. Science is the Tree of Death." [4] Newton's theory of optics was especially offensive to Blake, who made a clear distinction between the vision of the "vegetative eye" and spiritual vision. The deistic view of God as a distant creator who played no role in daily affairs was anathema to Blake, who claimed to regularly experience visions of a spiritual nature. He contrasts his "four-fold vision" to the "single vision" of Newton, whose "natural religion" of scientific materialism he characterized as sterile. Newton was incorporated into Blake's infernal trinity along with the philosophers Francis Bacon and John Locke. [5]

Blake's print would later serve as the basis for Eduardo Paolozzi's 1995 bronze sculpture Newton, after William Blake , which resides in the piazza of the British Library. 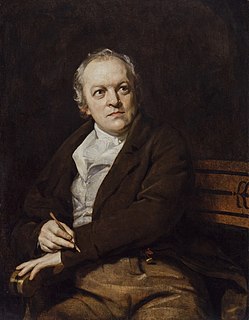 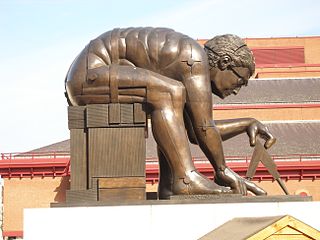 The Book of Ahania is one of the English poet William Blake's prophetic books. It was published in 1795, illustrated by Blake's own plates.

Events from the year 1795 in Great Britain. 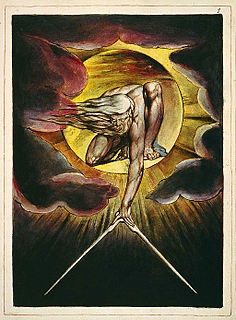 The Ancient of Days is a design by William Blake, originally published as the frontispiece to the 1794 work Europe a Prophecy. It draws its name from one of God's titles in the Book of Daniel and shows Urizen crouching in a circular design with a cloud-like background. His outstretched hand holds a compass over the darker void below. Related imagery appears in Blake's Newton, completed the next year. As noted in Alexander Gilchrist's 1863 book, Life of William Blake, the design of The Ancient of Days was "a singular favourite with Blake and as one it was always a happiness to him to copy." As such there are many versions of the work extant, including one completed for Frederick Tatham only weeks before Blake's death.

William Blake's Illustrations of the Book of Job primarily refers to a series of twenty-two engraved prints by Blake illustrating the biblical Book of Job. It also refers to two earlier sets of watercolours by Blake on the same subject. The engraved Illustrations are considered to be Blake's greatest masterpieces in the medium of engraving, and were also a rare commercial and critical success for Blake. 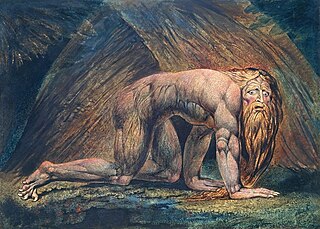 Nebuchadnezzar is a colour monotype print with additions in ink and watercolour portraying the Old Testament Babylonian king Nebuchadnezzar II by the English poet, painter and printmaker William Blake. Taken from the Book of Daniel, the legend of Nebuchadnezzar tells of a ruler who through hubris lost his mind and was reduced to animalistic madness and eating "grass as oxen".

The Ghost of a Flea is a miniature painting by the English poet, painter and printmaker William Blake, held in the Tate Gallery, London. Measuring only 8.42 by 6.3 inches, it is executed in a tempera mixture with gold, on a mahogany-type tropical hardwood panel. It was completed between 1819 and 1820, as part of a series depicting "Visionary Heads" commissioned by the watercolourist and astrologist John Varley (1778–1842). Fantastic, spiritual art was popular in Britain from around 1770 to 1830, and during this time Blake often worked on unearthly, supernatural panels to amuse and amaze his friends. 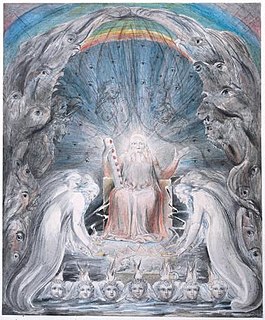 The Four and Twenty Elders Casting their Crowns before the Divine Throne is a pencil drawing and watercolour on paper by the English poet, painter and printmaker William Blake. Created circa 1803–1805, the drawing has been held in London's Tate gallery since 1949. It is likely a visionary and hallucinatory summary of scenes from Chapters 4 and 5 of the Book of Revelation when the throne of God was presented to the prophet Saint John the Divine. 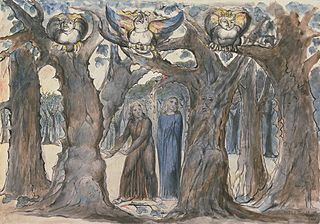 The Wood of the Self-Murderers: The Harpies and the Suicides is a pencil, ink and watercolour on paper artwork by the English poet, painter and printmaker William Blake (1757–1827). The work was completed between 1824 and 1827 and illustrates a passage from the Inferno of the Divine Comedy by Dante Alighieri (1265–1321). The work is part of a series which was to be the last set of watercolours Blake worked on before his death in August 1827. It is held in the Tate Gallery, London.

Isaac Newton was an English mathematician, natural philosopher, theologian, alchemist and one of the most influential scientists in human history. His Philosophiae Naturalis Principia Mathematica is considered to be one of the most influential book in the history of science, laying the groundwork for most of classical mechanics by describing universal gravitation and the three laws of motion. In mathematics, Newton shares the credit with Gottfried Leibniz for the development of the differential and integral calculus. 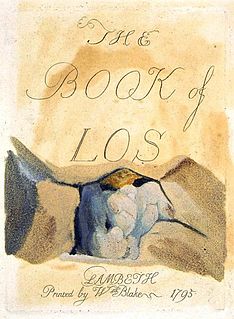 The Book of Los is a 1795 prophetic book by the English poet and painter William Blake. It exists in only one copy, now held by The British Museum. The book is related to the Book of Urizen and to the Continental prophecies; it is essentially a retelling of Urizen from the point of view of Los. The book has been described as a rewriting of the ancient myth of creation that equates fall with the loss of spiritual vision brought about by selfhood.

There is No Natural Religion is a series of philosophical aphorisms by William Blake, written in 1788. Following on from his initial experiments with relief etching in the non-textual The Approach of Doom (1787), All Religions are One and There is No Natural Religion represent Blake's first successful attempt to combine image and text via relief etching, and are thus the earliest of his illuminated manuscripts. As such, they serve as a significant milestone in Blake's career; as Peter Ackroyd points out, "his newly invented form now changed the nature of his expression. It had enlarged his range; with relief etching, the words inscribed like those of God upon the tables of law, Blake could acquire a new role."

The Night of Enitharmon's Joy, often referred as The Triple Hecate or simply Hecate, is a 1795 work of art by the English artist and poet William Blake which depicts Enitharmon, a female character in his mythology, or Hecate, a chthonic Greco-Roman goddess of magic and the underworld. The work presents a nightmarish scene with fantastic creatures.

Pity is a colour print on paper, finished in ink and watercolour, by the English artist and poet William Blake, one of the group known as the "Large Colour Prints". Along with his other works of this period, it was influenced by the Bible, Milton, and Shakespeare. The work is unusual, as it is a literal illustration of a double simile from Macbeth, found in the lines:

Light and Colour – The Morning after the Deluge – Moses Writing the Book of Genesis is an oil painting by the English painter Joseph Mallord William Turner (c.1775–1851), first exhibited in 1843.

The Agony in the Garden is a small painting by William Blake, completed as part of his 1799–1800 series of Bible illustrations commissioned by his patron and friend Thomas Butts. The work illustrates a passage from the Gospel of Luke which describes Christ's turmoil in the Garden of Gethsemane before his arrest and Crucifixion following Judas's betrayal. In Blake's painting a brilliantly coloured and majestic angel breaks through the surrounding darkness and descends from a cloud to aid and physically support Jesus in his hour of agony. The work is dominated by vertical lines, formed both from the trees and from the two arms of the angel. Two inner lines converge on Christ's palms, evoking the nails driven through him during his crucifixion.